Lake Baikal is holy to the Buryats

They were uprooted for decades and kept from practicing their cultural traditions. Now Buryat shamanism is blossoming once again at Lake Baikal - the Sacred Sea, as it is called in Siberia. Juri Rescheto reports. 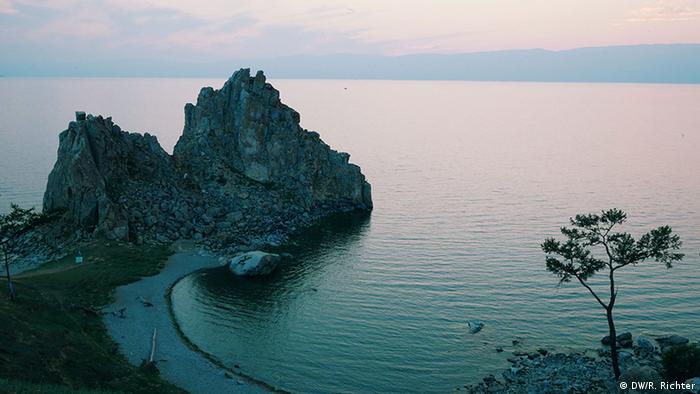 Where should I start? With sunrise, or sunset? Both are fantastic at Lake Baikal. Located in one of the most beautiful corners of the world, the lake initially leaves me speechless. It is big: the largest freshwater reserve in the world. It is clean: you can drink while you swim. And it is full of stories. One of them is related to me by Irina, a friendly shaman from the eastern Siberian industrial city of Irkutsk, whom I met at the shore at 4 a.m. - sunrise. And thus the question above is answered.

Irina is about 70, has brown, almond-shaped eyes, an azure blue dress and appears quite robust. She is enjoying the quiet of early autumn and the first rays of sunshine reflecting off the near-motionless lake. "For us Buryats, this is not a lake, it is a sea, the Sacred Baikal Sea."

Irina Tanganova, a shaman, has been coming here for 13 years. She thinks of herself as a spirit conjurer. She does this conjuring quietly singing in Buryat, the language of her people. 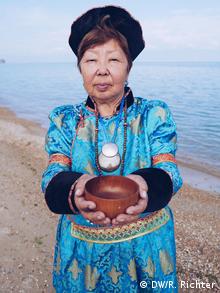 Shaman Irina Tanganova thinks of herself as a spirit conjurer

"How many shamans are there at Lake Baikal?" I ask.

"Many, up to 100," she says. "We come here to gain energy and because our 13 Chatas - our gods and spirits - live here. They are strong, and want to demonstrate their power. Do you want to see?"

To make sure that I don't miss the arrival of the spirits, I leave with Irina immediately. We head to the place where indigenous Siberians have been gathering for their International Shaman Conference, as they call it, for the last 13 years. At 8 a.m. some 100 men and women between the ages of 30 and 70 begin to arrive - almost all of them are from the Cape Burchan area, a cult site for the Buryats. Two young-at-heart Austrians are also in attendance. They stand out a bit visually and linguistically, but they are nevertheless afforded the warmest of shamanistic greetings.

Forbidden in the Soviet era

First come the birch trees; these are decorated with strips of cloth. Irina knows the rules for spirit conjuring and gets busy right away: "When spirits step down onto earth they allow their light beams to be reflected back up through the birches. When we shamans touch the trees we become part of the universe." Aha!

Shamanism is a mix of religion, naturopathy and occultism. It has been practiced for centuries here at Lake Baikal, except during the Soviet era. For 70 years the Buryats, like other Soviet citizens, had to believe in the USSR, learn Russian and memorize the "Moral Code of the Builder of Communism." Many forgot their own language during that time, not to mention their religion.

"I found my faith later. Much later, when I turned 60," confesses Irina. "My grandmother was a shaman, too. But not my mother, she lived during Soviet times and was not allowed to be. That is why she died so young." 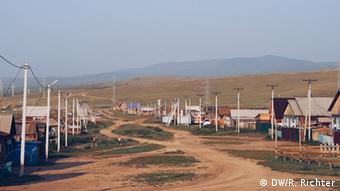 The village of Khuzhur on the island of Olchon

We are on Olchon, the lake's biggest island, in the Buryat village of Khuzhir. Now home to some 1,500 residents, Khuzhir used to be a Soviet fishing village. Today, a dozen barge launches quietly rust away here. Residents live on tourism, mostly from China. They come to the lake, sleep in wooden houses and then depart again. It seems that the International Shaman Conference has yet to be discovered by Chinese guides. There are hardly any visitors at the spot where the spirits are to descend. Thank goodness!

Around noon, Irina sets up a wobbly card table, sits down on a plastic folding chair and starts digging offerings out of a gym bag. First comes the milk. "I put Balan - a cross between cookies, pralines and gingerbread - next to it. Then comes the Sula, a candle. This all brings good luck and prosperity. Then there is the vodka, which absolutely has to face toward the direction from which the spirits will come. Lastly, money and cigarettes, in case the spirit wants a smoke."

I can't help grinning the whole while, but I find the seriousness with which Irina and her "colleagues" prepare this ritual somehow touching. Soon it becomes windy. Supposedly the spirits are announcing their arrival. The shamans announce their own preparedness with monotonous drumbeats. The spirits can come!

A sacrificial lamb is killed, skinned and cooked for "the gods." Later, men and women - separated by gender - stand half-naked and with mouths wide open. Birch twigs are used to sprinkle their faces with the water that the lamb was cooked in. This is to ward off evil. It is a rather archaic-seeming ritual. One has to believe in it if it is to work. 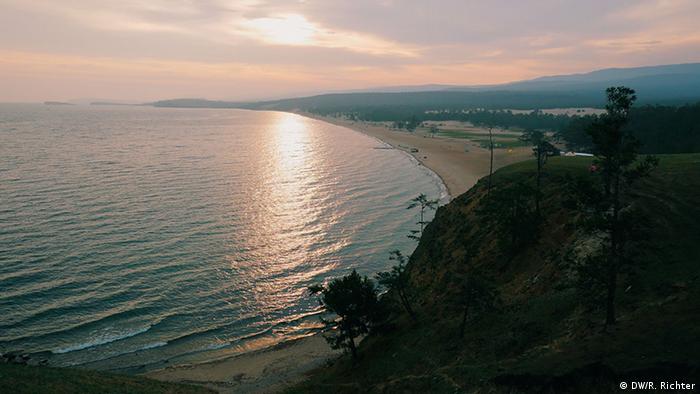 Sunrise on Baikal - the largest freshwater lake in the world

Irina drums herself into a trance. She sings, at times loudly. Five hours pass. By wind, by rain. Then she dances around the birches with 30 other shamans. Finally, the spirits are received. Unfortunately, they are invisible to outsiders like myself. Nevertheless, the dance and the scene itself are impressive enough.

The climax is grandma. Irina's deceased grandmother is suddenly said to inhabit her body. This explains why Irina, a former Soviet teacher - and today wearing a shaman's mask - is feeling around, hunched over, and grasping around herself with empty hands. Now she is singing in a high, grandmotherly voice.

A small group of people gather around Irina, or rather Irina's grandmother in Irina's body. Now the shaman has to show what she can do. In her trance she has to help those people, to heal them, to drive out evil spirits.

After the ceremony the birches are burnt. I am told that the ashes that one catches bring health and happiness: "I wish you health. That is the most important thing. You are an explorer; you must learn much in life. I want to mediate. I want to help others so that we can all be happier, okay?" says the perspiring elder Buryat after she "returns" from her trance. She looks at me impishly as she asks. "Okay!" I say, as I nod and thank her for this beautiful moment. The story of Lake Baikal - one of many.

Siberia: the heartland of shamanism

A Russian city that could 'collapse'

The main industry in Beresniki is potassium salt. It is an industry that both supports the city but is also destroying it. Many of the city's residents are living in fear. Juri Rescheto reports from Beresniki. (14.09.2016)