There is a small but vocal pro-Brexit voice on the left in the UK. DW examines what it is saying and whether it will impact the opposition's voting position when — or if — a deal with Brussels is struck. 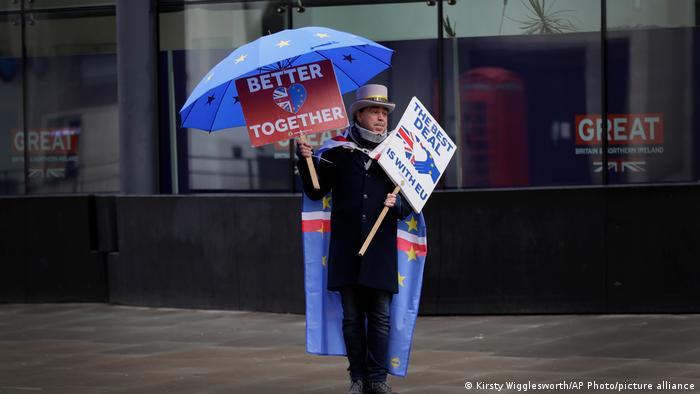 Not all of Britain's Labour Party is against Brexit

If a deal between London and Brussels is agreed this weekend, it still has to pass the British Parliament. This makes Labour's position potentially crucial if sufficient numbers of Tory MPs vote against it. While unlikely, Prime Minister Boris Johnson will no doubt still be running the numbers.

Britain's post-Brexit transition period ends on December 31, and negotiations between the UK and EU could go either way — a deal, a free trade agreement or a no-deal Brexit. The deal now being negotiated reportedly gives the UK limited access to the European Single Market. But if Johnson agrees to anything that leaves the UK subject to EU oversight, Tory backbenchers will revolt.

Loss of love for Labour

A year ago this week, Labour, the main opposition party, lost the UK general election, a de facto second referendum after the original Brexit vote in June 2016. Crucially, it also lost many seats in what observers called its "Red Wall" in northern England, a traditionally Labour-voting band of constituencies stretching across much of what was once a key industrial heartland of Britain.

For successive Labour leaders, Brexit had been a second-order issue — the first being to get the party elected in Westminster. But Brexit has become a first-order issue precisely because it made achieving election goals harder.

The Labour Party's post-referendum strategy of "constructive ambiguity" — not coming down on the Remain or Leave side of the Brexit issue — thus first hit the guardrails in December 2019, with the party's worst election result since 1935. Its left-wing leader Jeremy Corbyn quit soon thereafter.

"Corbyn played a blinder for the first three years after the Brexit vote by making sure that the blame game stayed with the Tories," Brown University economist Mark Blyth told DW. "During that time there was no one for capital — Big or Small — to talk to on the left, no trade-offs and arbitrage for the center-left, so it backed the Tories." But this meant that when Labour lost and Corbyn left, there was no opposition to the real center of power, which after December 2019 lay within the Tory party, by then dominated by the more extreme Brexiteers, he says.

The new party leader, Keir Starmer, expelled Corbyn from the party earlier this year and has made strides back into the Blairite center, but seems almost as equally confused over Brexit.

Starmer had clearly sought to avoid the issue until Johnson's meeting with Ursula von der Leyen last weekend. This week he said Labour would whip MPs to back a deal if it comes to a vote in the House of Commons — given the alternative is a no-deal. A handful of figures in the shadow cabinet, the trade unions and some backbenchers are urging the party to abstain, aware that supporting a deal would prevent Labour from criticizing it in the future and abstaining would not halt its passage.

If it seems like the same double-bind that trapped Corbyn, that's because it is.

Among the many explanations of Brexit, few have managed to explain how it is that a party funded by "big business" could pursue a policy so detrimental to business interests. Recall, for a moment, that 99 out of 100 FTSE-listed firms backed Remain in 2016.

"We see major producer groups, the car industry in Germany and finance in the UK, for example, as dominating each national economic model. But Brexit is a great paradox. You would expect political coalitions to follow the producer group model. The classic model isn't working," Blyth says.

One key lies in the emergence of a confluence of voting patterns in 2019 that tipped the election in Johnson's favor, a blind alliance between a section of the (mainly English) traditional working class, and a group of new "disruptive" capitalists, hedge fund owners and Russian oligarchs for whom nation states are an impediment to the free flow of (their) capital. Both groups, for radically different reasons, backed the claim that Johnson would get Brexit done. Whether this is a temporary phenomenon remains to be seen.

"Much of the population have been battered by Reagan-Thatcher aftermath neo-liberal globalization, designed to protect capital and set working people in competition with the poorest paid around the world," linguist, philosopher, and political critic Noam Chomsky told DW. "It is easy for demagogues to blame it on immigrants, Blacks, etc. There's plenty of anger and resentment. One reaction is 'we want our country back': Brexit-MAGA. Suicidal, but understandable," he adds.

The paradox lurks in plain sight: The Tory party is now largely financed by Russian oligarchs, Saudi Arabian oil money and other often unsourced funds. Hence, the interests it serves are inherently international. "The UK is basically a rentier economy,” Blyth says, referring to the act of supporting oneself on income made from property or investments . "It provides a place for international capital to find a home and local rentiers to live off the fees, sweat the assets when needed, and forget about the rest of the population,” he says. "The Conservative Party is basically no longer a party of industry, given there is none, nor really a party of finance, but simply a class of rentiers," Blyth adds. "Given this, Brexit is irrelevant, just massive displacement activity and more identity politics for rich, old men."

The choice coming up is one that has tormented postwar British capitalism, historians suggest. "One way to look at this is the long run, post-Imperial decline of British capitalism which began after WWII with loss of empire and ceding hegemony to the US," Meghnad Desai, a former Labour politician and London School of Economics (LSE) professor, told DW. "After the debacle in Suez in 1956, British capital merged with Western European capital. The EEC [European Economic Community] itself was an attempt to preserve capitalism in a post-imperial world," he says.

Borders after Brexit: A foretaste of what may come

Lexit and the illusion of sovereignty

The Lexit (left-wing Brexit) camp is split between those who see sovereignty as an end in itself and those who view it as a means to an end. Most of the latter are seeking a restoration of something like the postwar Keynesian compact.

"We were a counterweight to the anti-immigrant fear mongering of the former leader of the right-wing UKIP, Nigel Farage," Alan Johnson, a senior research fellow at the Britain Israel Communications and Research Center, wrote in The New York Times in 2017 and repeated to DW. "Whatever the EU could have been, since the 1980s it has made neoliberal economics an integral part of the project," he says.

But attacking the EU is problematic. On one hand, it upholds many social democratic values and institutions. On the other, it is actually less bureaucratic than the UK in some respects. Thatcher's pressure in the 1980s, ironically, actually made the EU far more market oriented than many in the UK might realize. At the same time, room for national governments to operate remains wide. The UK, for example, spends 39% of its national income on the public sector, while France's public sector makes up more than 56% of its economy. Meanwhile, state aid rules in practice are no barrier to increasing public ownership in the UK: many other EU states have large, nationalized sectors of the economy.

Outside the euro and Schengen zones, and with many opt-outs and rebates, the UK was only ever partially inside the EU, Blyth says. "The UK had the best deal in the EU," he says. "The new Brexit deal effectively leaves finance untouched, so there is no great problem, you'd think. But the UK now wants to negotiate a worse deal than the one it had within the EU. It is absurd, like trying to negotiate yourself taller. I see no great conspiracy, just a massive cock-up here," Blyth concludes.