Kyrgyzstan's last parliamentary elections ended with the winner being ousted by angry crowds of protesters. This time around, the new president is expected to cement his control over the government. 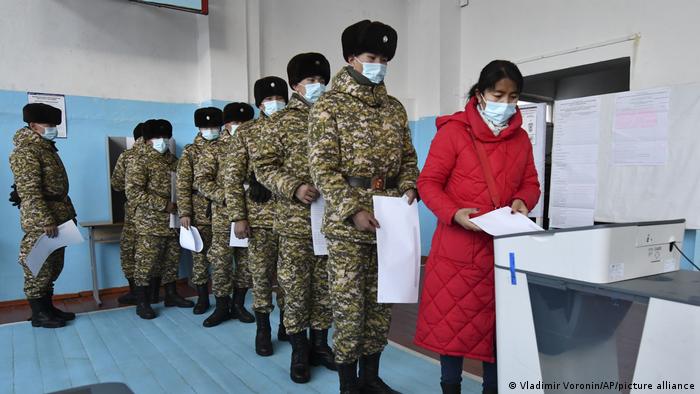 Zhaparov is not part of a party running for the parliament, but several alliances are loyal to him

Voters in Kyrgyzstan headed to the polls on Sunday to elect a new parliament, a year after the previous elections resulted in widespread protests that toppled the apparent winner.

President Sadyr Zhaparov, who took office in January after being released from prison during last year's unrest, commands strong support according to recent polls. He looks set to cement his grip on power, as his political allies are expected to perform well on Sunday.

However, the central Asian leader has claimed there was a plot against his government: "Some politicians are planning an armed coup," he said.

"We know them all, and after the vote we will take harsh measures against them. People who would take to the streets without a reason will face severe punishment," he said.

Around 1,300 candidates from 21 political parties are contesting 90 parliamentary seats in Sunday's election.

Zhaparov has pledged to "show the world" that his country can hold a free and fair election.

But critics have accused him of heading in the same direction as his predecessor, whose election sparked last year's protests, amid claims of corruption and election irregularities..

Shortly after coming to power, Zhaparov pushed through constitutional reforms that strengthened the position of the president at the expense of the parliament.

He also reduced the number of parliamentary lawmakers from 120 to 90, most of which are loyal to the president. Kyrgyz authorities have also recently made several arrests in relation to the coup plot mentioned by Zhaparov, as well as four party officials for allegedly buying votes.

Kyrgyzstan, a landlocked central Asian country of 6.5 million people, is facing a myriad of challenges.

It's a member of the Russia-dominated economic and security alliance of post-Soviet states, and also hosts a Russian airbase.

The unrest in the wake of last year's election marked the third time in 15 years that the country's leader had been violently removed from power.

The population is also facing rising living costs and a winter energy crisis, which has severely hampered trade with neighboring China.

However, voter turnout was expected to be low. One individual who had decided not to vote told the AFP news agency that the election would be won by "the same people who have been around for the last 30 years and brought nothing to the country."

Smog plagues the capital of Kyrgyzstan