The Central Asian country has said its death toll in armed clashes with rival Tajikistan had reached 31. The two countries have agreed a cease-fire after the worst fighting in years. 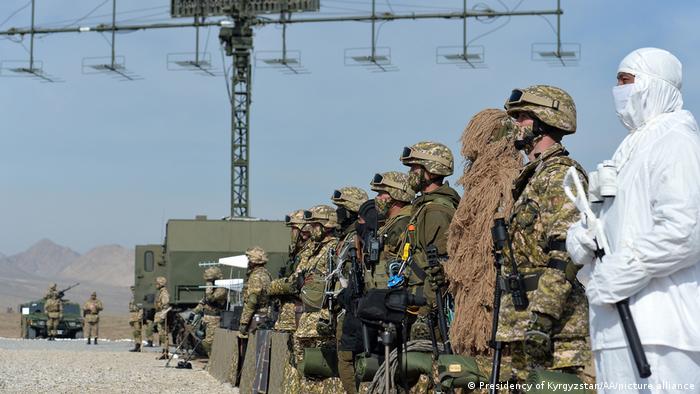 Kyrgyzstan says 31 people have died from the fighting.

Kyrgyzstan said on Friday that over 10,000 citizens had been evacuated following violent armed clashes with neighboring Tajikistan.

First Deputy Minister of Health and Social Development Aliza Soltonbokova said there had been over 150 casualties since fighting began on Thursday, in addition to 31 Kyrgyz people having died from the clashes.

According to doctors, 25 of the wounded victims were transported by a special plane from the southwestern town of Batken to the capital Bishkek and hospitalized.

The government of Kyrgyzstan's Batken region, which borders Tajikistan, said the evacuated citizens had been "placed in specially organized points" in its administrative center, "or went to visit relatives."

The Tajik news agency Asia-Plus reported 10 people dead and about 90 people wounded in Tajikistan, but these figures are unconfirmed. Tajikistan on Thursday said two citizens had been admitted to the hospital, with one in a serious condition.

Both sides blamed each other for escalating tensions.

Military units from Tajikstan and Kyrgyzstan began exchanging fire on Thursday, in the area surrounding the Tajik enclave of Vorukh. Later that day a cease-fire was declared by Kyrgyzstan's Foreign Ministry from 8:00 pm (1400 GMT). Armed forces then returned to their respective military bases.

In a statement published by its state information service, Tajikistan said both countries "came to a mutual agreement to end the armed conflict, to withdraw personnel and military equipment to places of permanent deployment."

Thursday's clashes along the border between the two mountainous countries proved the most violent in years.

Eyewitnesses at the border reported seeing arson and fires in several villages in Kyrgyzstan as well as the gathering of military equipment, according to Russian news agency Interfax.

More than a third of their border is disputed. Military units are known to clash over territorial claims and access to water.

Russia, an ally of both Tajikstan and Kyrgyzstan, said it would monitor the conflict.

Neighboring Uzbekistan on Thursday said it would assist in mediating the conflict.

Voters in the Central Asian country appear to have backed a constitutional reform that would substantially increase populist President Sadyr Zhaparov's powers.