Teen shooter Kyle Rittenhouse has been acquitted of murder charges after killing two people during a 2020 Black Lives Matter rally in the US city of Kenosha.

Kyle Rittenhouse was cleared of all charges in a widely publicized trial on Friday. Rittenhouse was put on trial over killing two men and wounding a third in August of last year during a Black Lives Matter rally in Kenosha, Wisconsin.

Rittenhouse is white, as are all three people he shot during the rally. He was 17 at the time.

After four days of deliberation, the jury found Rittenhouse not guilty on two accounts of murder and one account of attempted murder. He was also cleared of charges of "recklessly endangering safety" for his actions during last year's rally.

Rittenhouse collapsed into his courtroom chair when the verdict was read. He was seen crying after the verdict.

Following the verdict, Judge Bruce Schroeder confirmed Rittenhouse was "released from the obligation of his bond."

The judge also told the jurors they were under no obligation to speak to the media.

What happened in Kenosha?

The protests, which also included rioting, looting and arson, were triggered when police shot and paralyzed a Black man, Jacob Blake. The shooting came just months after the widely publicized murder of another Black man, George Floyd.

Rittenhouse showed up at the Kenosha rally with an AR-15-style semi-automatic weapon and a medic bag, saying that he had intended to protect private property from rioters. He claimed that he shot the three men in self-defense.

Rittenhouse then left the scene still wielding his rifle, before apparently tripping and falling in the street. Other protesters then tried to confront him, including 26-year-old Anthony Huber who hit Rittenhouse over the head with a skateboard.

Rittenhouse opened fire again and fatally shot Huber. Another protester, Gaige Grosskreutz, was shot after pointing his own gun at Rittenhouse. Grosskreutz testified that he was trying to disarm the shooter.

Prosecutors described the defendant as a vigilante and said he had gone to the protest with the intent of using his weapon.

What were the first reactions to the verdict?

US President Joe Biden said he stood by the jury's conclusion in the controversial trial.

"The jury system works," he was quoted as saying by the Reuters news agency. "We have to abide by it."

"To call this a miscarriage of justice is an understatement," De Blasio said in a tweet.

"We are all so very happy that Kyle can live his life as a free and innocent man, but in this whole situation there are no winners, there are two people who lost their lives and that's not lost on us at all," David Hancock, a spokesperson for the Rittenhouse family, told the Reuters news agency.

Anger and disbelief at the verdict

Anthony Huber's parents said the verdict "means there is no accountability for the person who murdered our son."

"It sends the unacceptable message that armed civilians can show up in any town, incite violence, and then use the danger they have created to justify shooting people in the street," they said.

The head of NAACP Derrick Johnson said the US justice system "has failed us, right on schedule." NAACP is one of the oldest and most influential groups fighting for African-American rights in the US.

"The verdict in the #KyleRittenhouseTrial is a reminder of the treacherous role that white supremacy and privilege play within our justice system," the NAACP chief said on Twitter. 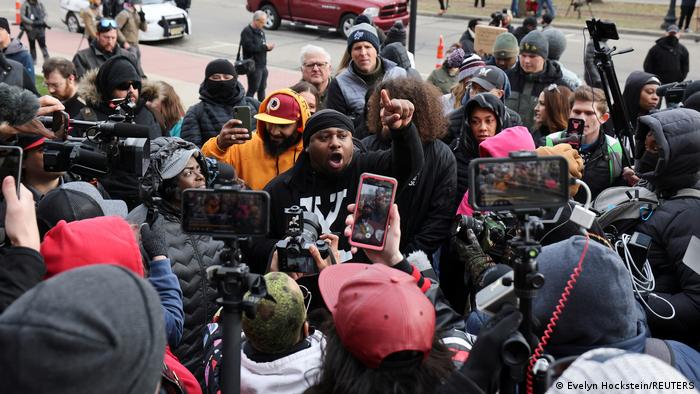 Civil Rights activist Reverend Al Sharpton said in a statement the verdict "was not only outrageous and dangerous," but it tells vigilantes "that they are above the criminal justice system."

"Disappointed but not surprised. This is not justice. This is not accountability. However, this is America," the Black Voters Matter group tweeted.

The Black Caucus in the US Congress slammed Rittenhouse's claim of self-defense as "ludicrous."

"It is unconscionable our justice system would allow an armed vigilante... to go free," the Congressional Black Caucus said in a statement. "It is time for criminal justice reform, and is beyond time for gun reform."

Fears of violence as divisions resurface

Authorities now fear that the outcome of the trial would spark fresh riots and violence, further deepening divisions in US society.

Portland police in the state of Oregon reported that a riot was taking place in the downtown area on Friday night.  Police said the protest involving around 200 people was declared a riot after some began breaking windows while police were pelted with objects.

Police said that "significant" resources were being sent to the scene and that response times for other calls were being impacted.

President Biden urged people to express their views peacefully according to the rule of law. He offered Wisconsin Governor Tony Evers federal support and assistance to protect public safety.

"Violence and destruction of property have no place in our democracy," Biden said in a statement.

Ahead of the verdict, Evers announced that 500 National Guard members stood ready in case of trouble. But hours after the jury came back, there were no signs of any major protests or unrest in Kenosha.

Michael Gravely, Kenosha County District Attorney echoed his president's words, asking the public to "accept the verdicts peacefully and not resort to violence."

Rittenhouse's lawyer Mark Richards said his life was threatened over the case.

"To me its scary how many death threats we had," he told reporters. "After the third death threat, I stopped answering my phone."

As he released the jurors, Circuit Judge Bruce Schroeder assured them the court would take "every measure" to keep them safe.

What is the expected impact of the trial?

The case feeds into larger debates on race, protests and gun rights in the US. Many on the political right view the teenager as a hero who put himself on the line to protect private property, while many leftists believe he acted out of racism and desire to do violence.

Reporting from Kenosha, DW correspondent Oliver Sallet said "emotions were running very high" in the courthouse while the verdict was read.

Outside of the courtroom, some people were honking their horns and celebrating while others were in disbelief, he said.

"A lot of people will be either relieved or very frustrated with today's verdict," he said.

There are also fears that the acquittal could encourage further gun violence, Sallet said. 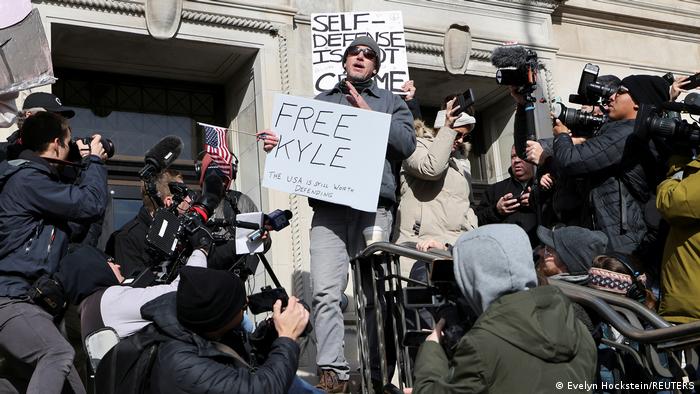 The case has highlighted divisions in the US society, where some view Rittenhouse as a hero

"A lot of people and critics are concerned that this is a blueprint now for people — essentially saying that it's ok to take your gun, your assault rifle to a protest," he said.

"And perhaps the most important question: What would have happened if Kyle Rittenhouse was a Black citizen, would we have seen another verdict then?"

The case has also prompted questions about police treatment of Rittenhouse and other armed people who took to the street for what they claim was protection of private property, versus the police response to the actual Black Lives Matter protesters. After the shooting, Rittenhouse approached the police with his hands in the air, but the officers ignored him. He was only arrested the following day.