Kremlin tells US to cut diplomatic staff in sanctions row

Russia's Foreign Ministry has told the US to cut the number of its diplomats in Russia, responding to anti-Russian sanctions endorsed by the US Senate. Moscow accused the US of hiding behind "exceptionalism." 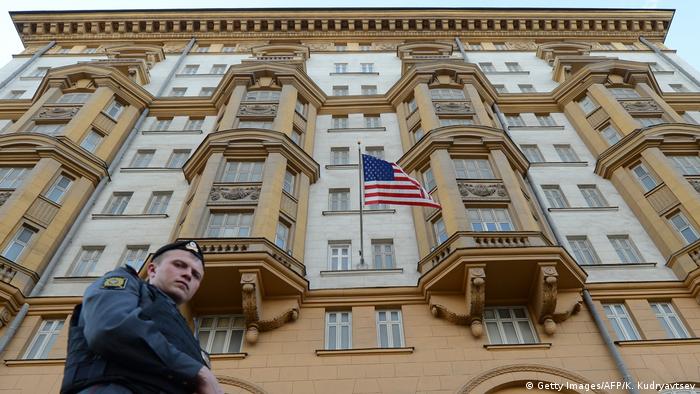 The decision to boost sanctions against Russia showed the "extreme aggression" of the US in the international arena, the Russian Foreign Ministry said while detailing its counter-measures in a Friday statement.

Also, Russian authorities said they would seize a dacha (a vacation home) used by American diplomats outside of Moscow, as well as warehouse in the Russian capital.

Russian officials also slammed the US sanctions, saying they are motivated by "absolutely imaginary allegations of Russian involvement in their internal matters."

"While hiding behind its 'exceptionalism,' the US is haughtily ignoring other countries' positions and interests," they said.

US Senate passes sanctions against Russia

US 'blackmail' to limit cooperation with Europe

Both chambers of the US Congress approved the sanctions bill earlier this week. The document is designed to target, among other things, Russia's key energy sector and other segments of the Russian economy.

The bill has triggered concern in the EU, as the sanctions could also hit European companies working with the Russians on energy projects, including the major Russian Nord Stream 2 gas pipeline. On Wednesday, the German Foreign Ministry warned that Berlin "could not accept" the US using sanctions against Russia as a tool of industrial policy.

EU Commission chief Jean-Claude Juncker also warned that the sanctions bill might have an impact on Europe's "energy security interests" and said that the European bloc was ready to respond with measures of its own.

The Russian Foreign Ministry also decried US lawmakers for using "political tools in order to create an unfair advantage for the US in global economy."

"This blackmail, aimed at limiting cooperation of Russia with its international partners, carries a threat to many countries and international business," the said on Friday.

Trump pressed by Congress on Russia

The countermeasures follow a Thursday vote in the US Senate, where senators from both parties overwhelmingly backed the sanctions bill. It still needs to signed by President Donald Trump. Trump might choose to veto it and send it back to Congress, but the lawmakers are likely to overrule such a decision.

The bill includes a section that requires Trump to seek permission from Congress before lifting the sanctions,limiting his ability to maneuver diplomatically.

Russian president Vladimir Putin approved the Russian counter-measures, Kremlin spokesman Dmitry Peskov told reporters on Friday. Peskov added that the Kremlin did not wait for Trump to sign the bill before responding, as the bill was "almost fully defined" after going through the US Senate.

Read more: Germany wary of US sanctions against Russia

On Thursday, Putin decried the "boorish" behavior of the US and said that sanctions against his country were illegal.

"It is very regrettable that Russian-American ties are being sacrificed to issues of American internal policy," he said during a diplomatic visit to Finland.

The sanctions punish Russia for alleged meddling in the US presidential elections as well as military intervention in Ukraine.