A Russian Mi-8 helicopter has been shot down in Syria with five people on board, the Kremlin says. Officials say there were no survivors. 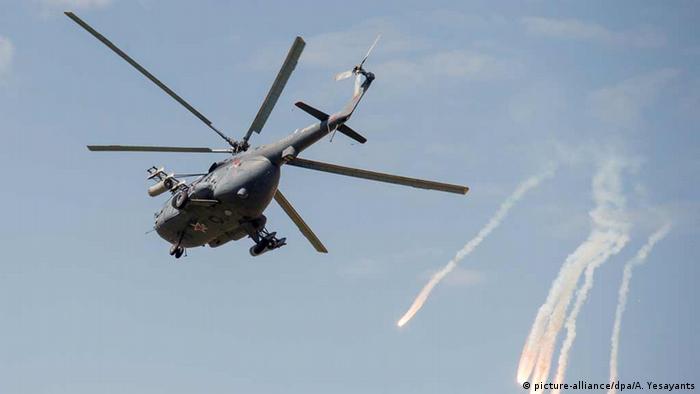 A Russian Mi-8 transport helicopter was shot down Monday while returning to base after delivering humanitarian aid to the Syrian city of Aleppo, according to the Russian Defense Ministry as cited by the Interfax news agency.

The helicopter came down in northwestern Idlib province, according to Interfax.

The ministry was quoted as saying that the aircraft was carrying three crew members and two officers from Russia's center for reconciliation of the Syrian conflict.

Kremlin spokesman Dmitry Peskov later told reporters that all the military personnel on board the helicopter had died.

"As far as we know from the information we've had from the Defense Ministry, those in the helicopter died. They died heroically, because they were trying to move the aircraft away to minimize victims on the ground," Peskov said

If the five deaths are confirmed, the crash would represent the deadliest single incident for the Russian military since it began operations in Syria, and bring the total number of the Russian forces killed there to 18.

Since last year, Russian armed forces have been fighting on the side of Syrian President Bashar al-Assad against anti-government fighters including the jihadist group "Islamic State."

Aleppo is under siege from government forces supported by Russian airstrikes. The UN estimates that some 300,000 people are still trapped in the rebel-held parts of the city, with food and medicine in short supply.