Cuba's best-known dissident has cleared customs and is about to depart on a world tour. She was denied travel permission 20 times, but now that that fog's cleared, Yoani Sanchez wants to go around the world in 80 days. 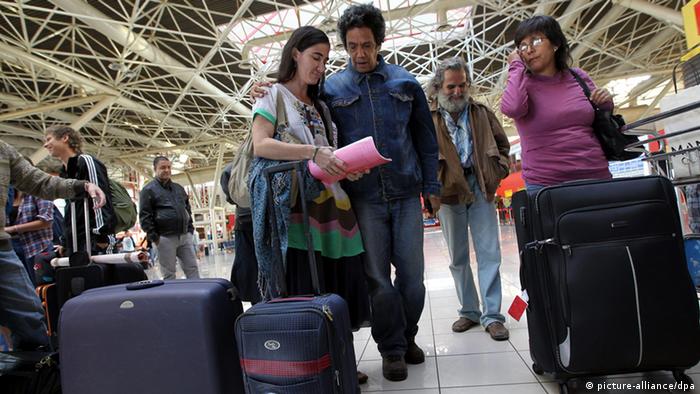 The dissident blogger Yoani Sanchez checked in at Havana's international airport on Sunday without complications, with a flight to Brazil the first item on her world tour itinerary.

Sanchez was granted a passport two weeks ago, under more lax travel laws introduced in January by Cuban authorities. The critical online activist, who had been denied a passport in 20 applications over the past five years, was initially skeptical about her chances of securing a passport even under the new system.

The 37-year-old author of the Generacion Y blog is one of several Cuban critics to receive a passport, but the first to take advantage of the measure.

Cuba: A look back at five years of Raul Castro

Cuban President Raul Castro wanted to update socialism when he took up office, but, five years on, little has changed. Change is not expected after Sunday's elections with 612 Communists running for 612 seats. (03.02.2013)

"I made it through immigration, now I only need to board the plane and take off," Sanchez told more than 400,000 followers on Twitter. "To tell the truth, my knees haven't stopped trembling."

Around the world in 80 days, with 'Passepartout'

She promised to post regular updates on her travels, saying she hoped to visit at least 12 countries in that time. As well as Brazil, trips to Argentina, Peru, Mexico, the United States, Spain, Italy, Poland and the Czech Republic are on the agenda - with German publication Spiegel reporting that a trip to Germany is also probable.

"The big news is not now, but in 80 days when she will return," said Bert Hoffmann, an expert on Cuba at the German Institute of Global and Area Studies in Hamburg. "Many regime opponents have left Cuba for exile, but this is the first time a prominent dissident sets out on a high-profile world tour to then come back to the island."

Deutsche Welle named Sanchez's Generacion Y the best online blog in the 2008 edition of its annual The Bobs awards. In the same year, the US magazine Time declared Sanchez one of the world's 100 most influential people.

Cuba's new travel rules replaced the so-called "white cards" - previously issued by the government to would-be travelers - with a simple passport system. The government also scrapped a rule requiring that Cubans secured a specific letter of invitation from their travel destination - as opposed to just a visa - and extended the maximum permitted travel period from 11 to 24 months.