Kissing against censorship and prejudice in Israel | News and current affairs from Germany and around the world | DW | 08.01.2016

Kissing against censorship and prejudice in Israel

A video of Arabs and Jews kissing has gone viral. The goal of the video was to protest the banning of a book about an Arab-Jew love story from school curricula last month. 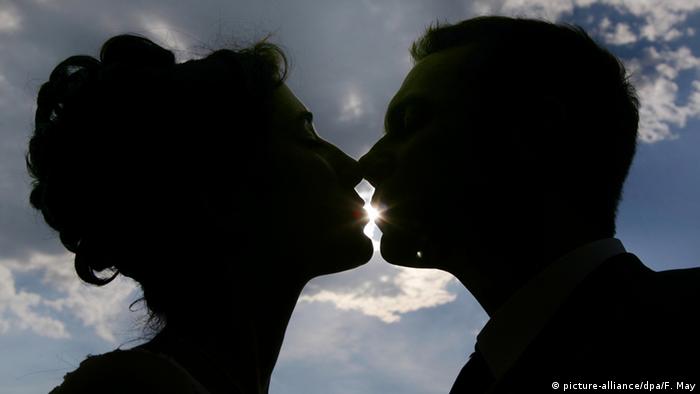 Many people in Israel were angered by the recent decision to ban a novel from school curriculum because it features a love story between an Arab and a Jew. In response to that Time Out – Tel Aviv, a culture magazine, published a video of Arabs and Jews kissing on their Facebook and YouTube channels.

"Many people would call us traitors, haters of Israel, a danger to society. Others will stay silent, but think ‘I'm lucky that's not my son, because I don't know what I'ld do if my son would, God forbid, choose a partner who's not a part of 'us,'" said a statement from Time Out on their website.

"We will keep our belief that a human being is first and foremost a human being, and only afterwards comes their religion and place of birth, as chosen by their ancestors or by them," it added.

The video has since gone viral and has been seen over two hundred thousand times.

"Borderlines," a novel by the Israeli author Dorit Rabinyan, was stricken from a list of books a committee recommended to be included in literature classes. The decision was made by the Ministry of Education, led by Naftali Bennett, a right-wing politician.

The Education Ministry said in a statement that "intimate relations between Jews and non-Jews threaten the separate identity of each sector," adding that "young adolescents don't have the systemic view that includes considerations involving maintaining the national, ethnic identity of the people and the significance of miscegenation."

Set in New York, Tel Aviv and Remmallah, the book tells the story of Liat, an Israeli translator, and Hilmi, a Palestinian artist. The two meet in New York and fall in love. Life intervenes and they move back to their respective countries.

The book was published in 2014 to rave reviews.

"Rabinyan's writing reflects the honesty and modesty of a true artisan. She is meticulous, to be sure, but at the same time she doesn't appear to be straining, and this is what sets someone like her apart from those who merely practice the craft of writing," said Dorit Shilo in Ha'aretz, a left-leaning daily newspaper in Israel.

One of main points of the video is to show that it is not always easy to decipher who is the Jew and who is the Arab. The background of the people is not mentioned in the video.

"When one's soul is emits light, even a pitch black sky will become beautiful," said one Arab participant, quoting a famous rabbi.

"I wish life would be beautiful, much more full of love and much less hate," said another Israeli participant.

Some social media users were offended by the video. One Arab Facebook user called the video "disgusting" and added "Let us stay enemies. That is natural."

The Twitter user below said sarcastically that the video showed "Peace and love." The responses under the tweet were also negative saying "What!" and "You are succumbing to social pressure."

Some Israelis were also critical of the video. Golan Buchnik commented on Facebook that "You should be ashamed of yourselves, you bunch of left-wing traitors."

But the number of positive tweets and comments vastly outnumbered the negative ones, with one Facebook user calling the video "important."

Two Facebook users writing in Arabic summed up their opinion of the video very succinctly with just one word: "Nice."

Israel's Ministry of Education has banned a novel that portrays a romantic relationship between an Israeli woman and a Palestinian man on the grounds that it "threatens Jewish identity" and encouraged "miscegenation." (31.12.2015)

New Year's Eve festivities have been banned by Hamas, the de-facto rulers of the Gaza Strip. The Islamist group says the celebrations were "incompatible" with Islam. (30.12.2015)

Israeli ministers have approved a contentious draft bill that would impose new rules on NGOs that receive money from foreign governments. Opponents say the bill is designed to silence criticism of Israel's rights record. (27.12.2015)