The US Secretary of State will on Wednesday outline fresh plans for an Israel-Palestinian peace process. Israel has accused the US of orchestrating Friday's UN Security Council resolution decrying its settlement program. 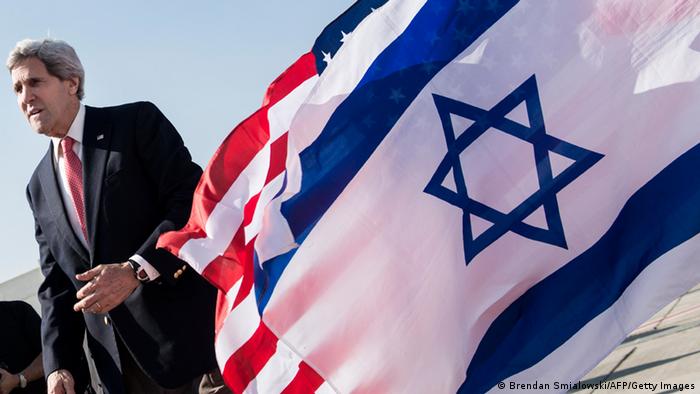 With just four weeks remaining before he leaves office, US Secretary of State John Kerry will on Wednesday lay out the next steps needed to push both Israel and Palestine leadership toward a two-state solution.

State Department spokesman Mark Toner told reporters Tuesday that Kerry believes "it is his duty in his remaining weeks and days as secretary of state to lay out what he believes is a way towards a two-state solution."

"It's always important to keep the process moving forward," Toner said. "We haven't given up on this and we don't think the Israelis and Palestinians should do either."

Kerry's final policy speech will come amid a furious Israeli government and a new low in relations between the Obama administration and Israel's Prime Minister, Benjamin Netanyahu.

The US abstained in Friday's strongly-worded UN Security Council resolution, which decried Israel's settlements in the occupied West Bank territories and East Jerusalem as a "flagrant violation" of international law and demanded an end to settlement building. Although the US has long opposed the settlements, it has generally used its veto rights to diplomatically shield its ally from censure. Its decision to abstain saw the resolution pass by a 14-0 margin in the 15-member Security Council, the first UN resolution adopted since 1979 condemning Israel's settlement policy.

On Tuesday, Netanyahu's spokesman, David Keyes, said the Israeli government had received "ironclad" evidence from Arab sources that Washington had played an active role in drafting the resolution and "pushed hard for its eventual passage."

Toner on Tuesday denied that the Obama administration had pushed for the resolution and defended the decision to abstain, saying that the US wanted to "send a clear message about our concerns about settlement activity." Toner also repeatedly emphasized that the resolution was drafted by Egypt and the Palestinians, while the US only contributed on the language after the two countries' intention to go ahead with the vote was made abundantly clear. "The idea this was pre-cooked in advance is not accurate," he said.

The US is expected to take part in an international Middle East peace conference in Paris on January 15, which Israel fears could lead to further action being taken against it. The Israeli government has made no secret that it is banking on President-elect Donald Trump, who will take office on January 20, to contain the damage.

Trump has indicated that he will take a softer line on Israel's settlement policy, having pledged to relocate the US embassy to Jerusalem. The move breaks rank with the international community by effectively recognizing the city, seized during the Arab-Israeli War in 1967, as Israel's capital.

In defiance to Friday's vote, Israel could also advance plans to expand its settlement program and build thousands of new homes in annexed east Jerusalem, a mainly Palestinian sector of the city. According to Ir Amim, an NGO that monitors settlement building, a Jerusalem planning committee is expected on Wednesday to discuss issuing building permits for 618 housing units.

However, news agency AFP has reported that Jerusalem's deputy mayor, Meir Turjeman, has also sought to advance plans for some 5,600 further units. "I'm not concerned by the UN or anything else trying to dictate our actions in Jerusalem," Turjeman wrote on his Facebook page. "I hope the government and new US administration will give us the momentum to continue and make up for the shortage created over the eight years of the Obama administration."

The UN Security Council urged aid for Gaza in its first statement on the most recent Israel-Hamas conflict. The truce seemed to be holding as rallies across Israel called for peace and Hamas militants paraded Gaza.