Secretary of State John Kerry has pressed the US case for a punitive strike on Syria's Assad regime, saying a chemical arms attack last week was provable, with "high confidence" in details learned by US intelligence. 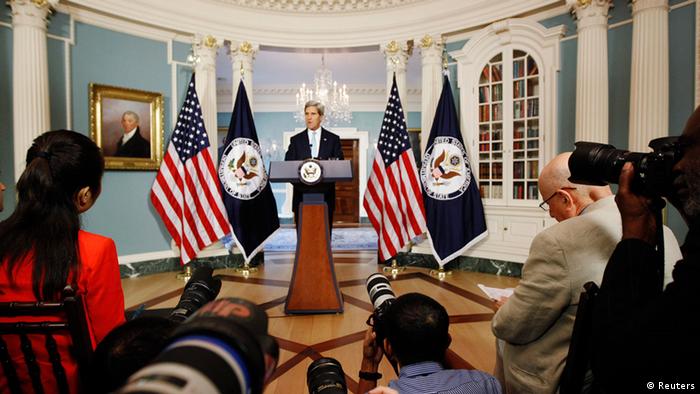 The United States said on Wednesday a decision by Barack Obama on how to react militarily against Syria's Bashar al-Assad was still pending, but multiple "facts" pointed to a gas attack last week by his regime that killed 1,429 people.

US Secretary of State John Kerry listed what was known about events around 21 August. These included, he said, preparatory work done by Syrian regime chemical weapons personnel in the area three days before the attack and orders given to regime elements to put on gas masks.

Rockets came from regime-controlled areas of Damascus and landed in an opposition-controlled neighborhood. Dead victims, including 426 children, were later laid out in shrouds "unstained by a single drop of blood," Kerry said.

For four days afterwards, said Kerry, the Syrian regime shelled the area to "destroy evidence" and UN inspectors who examined the area in recent days had been "restricted and controlled."

The UN inspectors only had a mandate to determine whether outlawed chemical weapons had been used but not what the world community should do in response, Kerry said.

The United States knew that other nations and groups such as North Korea and Lebanon's Hezbollah were "waiting to see if Syria will get away with it," he added.

His remarks were based on a four-page intelligence assessment released by the White House containing what Kerry called declassified information. Further information was intended only for members of Congress, he added.

The United States had a responsibility - stemming from chemical weapons usage during World War I and their abolition - to also protect its Middle East partners bordering Syria, such as Jordan, Israel and Turkey, and to ensure that "despots" were held accountable.

"So the primary question is really no longer, what do we know? The question is, what are we - we collectively - what are we in the world gonna do about it?"

Kerry said any move by the United States would be "tailored" and would not in any way resemble the US invasions of Afghanistan and Iraq, nor its intervention to help topple former Libyan dictator Muammar Gaddafi.

Obama, speaking while hosting leaders from Lithuanian, Latvia and Estonia at the White House, said he had not made a final decision on Syria, but continued to consult with Congress and allies of the United States.

"We're not considering any boots on the ground approach," Obama said.

'This is why we have a parliament'

The British parliament's rejection of military intervention in Syria means the UK will not participate in any US-led strike. DW talked to one of the MPs who voted against UK involvement about this surprise move. (30.08.2013)

Arab League left with no influence in Syria

The Arab League has no influence on the West or the Assad regime. But the league of Arab states could still play an important role in the Syria conflict, German political scientist Josef Janning told DW in an interview. (30.08.2013)

UN spokesman Martin Nesirky said Ban intended to "engage" with the council's five powers, with Britain, France and the United States opposed by China and Russia on whether to blame Assad and exert sanctions.

French President Francois Hollande told the newspaper Le Monde on Friday that he supported "firm" punitive action over the alleged Syrian gas attack, adding that France had a "stack of evidence."

"There are few countries that have the capacity to inflict a sanction by the appropriate means. France is one of them. We are ready. We will decide our position in close liaison with our allies," Hollande said.

UN inspectors are due to leave Syria on Saturday. Nersirky offered no timetable on when the inspection team's analysis would be completed.

He added that the inspectors would return later to investigate several other alleged poison gas attacks that had taken place in Syria during the country's 2-1/2 year
civil war.

The Swedish technology publication Ny Teknik said analysis of samples from Damascus would be done in certified laboratories in Sweden and Finland.

Russia, Assad's ally, which has previously used its veto-powers at the UN, said on Friday that the British parliament's "no" had set back US-led plans.

Yuri Ushakov, a senior foreign policy adviser to President Vladimir Putin, said: "People are beginning to understand how dangerous such scenarios are."

"Russia is actively working to avert a military scenario in Syria," Ushakov said.

The Assad regime has denied any involvement and blamed the apparent gas attacks on rebels involved in Syria's two-and-a-half year conflagration.

Syrian state television on Friday said Syria's foreign minister, Walid Muallem, had told UN chief Ban by phone that Damascus would "refuse any partial report" before analysis of the inspectors' samples was completed.

With the war in Ukraine entering its second month, NATO allies have agreed to bolster eastern defenses and G7 leaders have warned Russia against using chemical weapons in Ukraine.

A German court has found a Syrian former army colonel guilty of crimes against humanity, handing him a life sentence. It was a landmark trial to examine state-sponsored torture during the Syrian civil war.