Incumbent President Uhuru Kenyatta has taken a significant lead in Kenya's tense elections, according to early results. Opposition leader Raila Odinga dismissed the tally, claiming that the election had been hacked.

Riots broke out in the opposition stronghold of Kisumu in western Kenya on Wednesday, with police firing tear gas at anti-government protesters following the tense Tuesday election. The protesters chanted "No Raila, no peace," invoking the name of the opposition leader Raila Odinga.

The unrest started soon after Odinga publically rejected the preliminary election results as a "fraud."

The early results published by Kenyan electoral officials showed Odinga trailing his rival, President Kenyatta, by some 1.3 million votes. The tally was based on 92 percent of the polling stations, putting the president at 54.4 percent to Odinga's 44.7 percent.

At a Wednesday press conference, Odinga insisted that he was actually in the lead, according to the count published by his party. He told reporters that hackers broke into the state electronic tallying system by using credentials of a recently murdered electoral official.

"This is an attack on our democracy," he said. "It is the machine that has voted."

Odinga urged his supporters to "remain calm as we look deep into this matter," but added: "I don't control the people."

The official commission later told the media that it was investigating Odinga's claims, but added it can neither confirm nor deny the alleged hacking.

The Kenya Human Rights Commission, a well-known non-governmental organization in the east African country, also criticized the election officials and cited several apparent irregularities from various polling stations. It described some of its actions as "opaque" and said the official tally was "not based on any verifiable results." 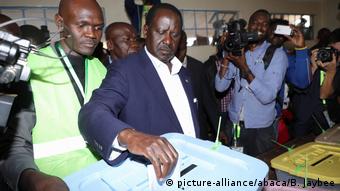 Kenya's elections are taking place a decade after the infamous 2007 vote, which resulted in widespread violence leaving more than 1,100 people dead and 600,000 displaced, and which foreign observers agreed was riddled with irregularities.

Candidates running for the highest office in the country need a simple majority to win a five-year term. Up to 20 million Kenyans cast their ballots at 41,000 polling stations on Tuesday.

The presidential vote is being held concurrently with the election of 47 governors, 47 senators and 290 members of the lower house. Final results are expected later on Wednesday at the earliest, but election officials have up to a week to declare the outcome.

There are a total of eight candidates running for the presidency, but 55-year-old Kenyatta and 72-year-old Odinga seem to be the absolute front-runners by a long stretch.

Read more: How Kenyan youth could swing the 2017 election

A vote for peace and prosperity

From local politicians to international observers, people in Kenya were hoping for peaceful elections. DW correspondent Sella Oneko said that voters "hope that everything will pass quickly, so that things go back to normal."

"Many people are very disillusioned and feel that elections and politicians haven't and won't improve things," Oneko said. In one of the latest surveys, high living costs, corruption, a lack of jobs and the drought were the voters' most serious concerns.

Analysts warned that, no matter the outcome, the losing candidate is likely to make allegations of election fraud - which many fear could spark violence similar to that of 2007.

"It seems almost inevitable that whoever loses will question the result," Nic Cheeseman, professor of African politics at Birmingham University in England, told the AFP news agency ahead of the unrest.

"The question is not whether or not they will accept the result but what they will do when they don't accept it."

Obama: 'Respect the will of the people'

Former US President Barack Obama, whose father was born in Kenya, called on voters to ensure a stable democratic process.

"I urge all Kenyans to work for an election - and aftermath - that is peaceful and credible, reinforcing confidence in your new constitution and the future of your country," Obama said in a statement on Monday. 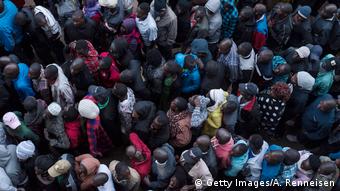 Voters stood in long lines at a polling stations

"I urge Kenyan leaders to reject violence and incitement. Respect the will of the people."

In an interview with DW before the vote, Odinga laid out his conditions for accepting the election results.

"In the unlikely event that I lose fairly, I will definitely accept the will of the people," he said, adding that if he won he would make rooting out corruption a top priority, along with efforts to unite the country.

"Basically, they have been looking out for their friends," Odinga said about the government under Kenyatta's leadership. "So, it is not even the communities that are benefiting. That has polarized the country, because other people feel completely excluded from the governance structure."

Kenyans and international observers hope that a breakout of violence like the one that shook the country in 2007 will be avoided this time. But the situation is universally described as very tense. (07.08.2017)

Kenya is known as a country of safaris and picturesque beaches - but it's also a nation marred by ethnic rivalries. Due to its strong economy, Kenya plays a leading role in East Africa. (07.08.2017)