How Kenyan youth could swing the 2017 election

Kenyans are set to go to the polls on August 8 this year to vote in a new government. President Uhuru Kenyatta and opposition leader Raila Odinga are clamoring for the youth vote. Andrew Wasike reports from Nairobi. 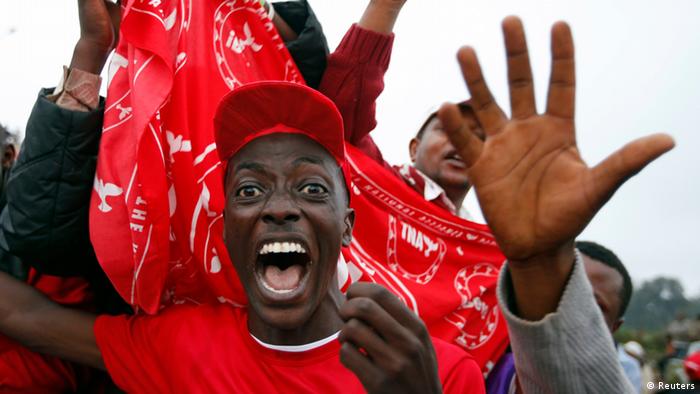 At least 80 percent of Kenya's population is made up of people aged 35 and below. According to Kenya's demographics, the country boasts of the most youthful voters in the East African region. More than half of the 19 million registered voters in Kenya are considered youth, their participation in the August 8 general elections will be crucial and might determine who wins the presidency.

In the past,  a section of Kenyan politicians have used the youth for all the wrong reasons, some buy off votes from desperate youth who lack any form of employment thus ballooning their voter numbers, while others incite the youth to cause violence in protest of election results.

After the elections, the youth are always left disillusioned after receiving empty promises from politicians. The jobs that they are promised are not created, scholarships are nowhere to be found and the cost of living is ever growing.

In this year's election, the Kenyan youth are saying with one voice that enough is enough. They want to participate directly in the development and governance of their country. I visited a famous spot in the Kenyan capital Nairobi where the youth gather to watch football matches and make merry, and spoke to some of them on what their plans are come August 8.

"I think this time round, the elections are going to be different," one of the young voters said. "The old political leaders who have been in power…they have been taking the youth for granted, we have been isolated and forgotten for so many times,  it's high time to show these old men that we are actually the ones who employ them," he said.

Another young voter described to me how tired he was of the youth being exploited by politicians to shed blood just to push the politician's agenda. "The youth should choose a leader wisely, question their manifesto, read it and vote leaders with substance, not leaders who exchange words, cheap politics, no!"

A recent World Bank report shows that 1 out of every 5 youth aged between 15 and 29 in Kenya is unemployed. The Kenyan youth plan to use their large numbers at the ballot box to shape the future of Kenyan politics.

Kenyan political analyst Naftali Mwaura said he had never witnessed such enthusiasm among the youth to participate in the forthcoming general election. "This particular demographic will kind of play a swing-roll, they might swing the outcome of the elections," Mwaura said.

Battle for the youth vote

According to Mwaura, the youth will be a force to reckon with during this year's general election and will possibly decide who will be elected into office. "I believe major players in these electionsare counting on the youth to swing them to victory."

Mwaura said as much as the older generation of politicians has the financial and political power, they should also remember that there is a young cohort of voters who feel disgruntled, who feel that the politics of this country are not going in the right direction.

The current political landscape in Kenya is not so accommodating to the youthful population as it is full of ethnic balkanization and divisions that often turn away the youth. Having grown up in cosmopolitan towns and suburbs, majority of them don't have a strong affiliation with their ethnic backgrounds unlike the older generation, a loophole which older politicians have always utilized.