Officials say Kenyan troops taking part in an AU mission in Somalia have attacked an al-Shabab camp in the south, killing 52 militants. Kenya has claimed several recent successes against the group. 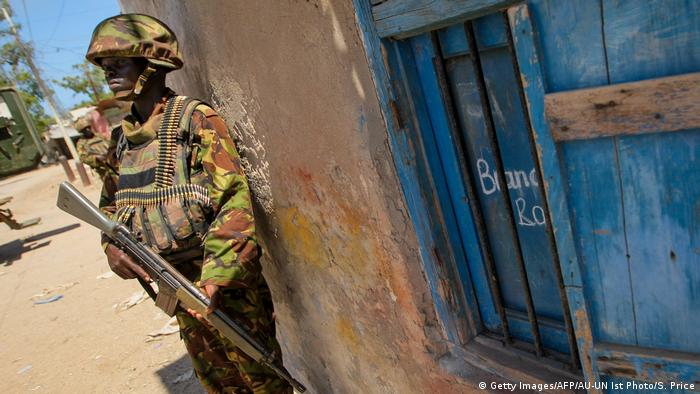 Kenyan soldiers on Friday "successfully raided and destroyed an al-Shabab terrorist camp" in the Badhadhe region of lower Jubba, the Defense Ministry in Nairobi said in a statement.

The ministry said 52 members of the radical Islamist group were killed and several injured in an "intelligence-led operation."

It did not say whether there were any casualties among Kenyan troops, and the report has not yet been independently verified. Kenya's government has previously made claims about victories against al-Shabab that have been disputed by Somali residents, and the militant group itself often gives very different tallies of casualties incurred.

Kenyan troops are taking part in a 22,000-strong African Union contingent that is helping Somalia's fragile Western-backed central government in its fight against the insurgency waged by the extremists.

Nairobi, which first sent troops to Somalia in 2011 after a series of attacks on Kenyan soil, perceives al-Shabab as a growing threat. The group has been blamed for more than 100 attacks inside Kenya since the deployment, including that on Garissa University in April 2015, in which 148 people died.

Although al-Shabab, which is affiliated with terrorist group al Qaeda, has lost territory to the AU troops, it continues to carry out deadly attacks in the Somali capital, Mogadishu, and elsewhere. It has been fighting for years in a bid to set up an Islamic state in Somalia based on its own harsh interpretation of the religion.

In the past few weeks, al-Shabab has stepped up attacks, and the government of recently elected President Mohamed Abdullahi Mohamed has declared a new offensive against the group in response.

In January, al-Shabab said its fighters killed dozens of Kenyan troops at a remote military base in Somalia, but this count was not confirmed by the Kenyan military, which said nine of its soldiers had died and 70 militants were killed.

A year previously, the group said it had killed more than 100 Kenyan soldiers in a camp near the Kenyan border, with media in Kenya suggesting that this toll could be approximately correct.