Al-Shabab is fighting a 'long-term battle in Somalia'

Al-Shabab continues to launch attacks in Somalia. In a space of one week the al-Qaeda linked group launched two attacks, one on AU military base and another targeting civilians. But what is their endgame? 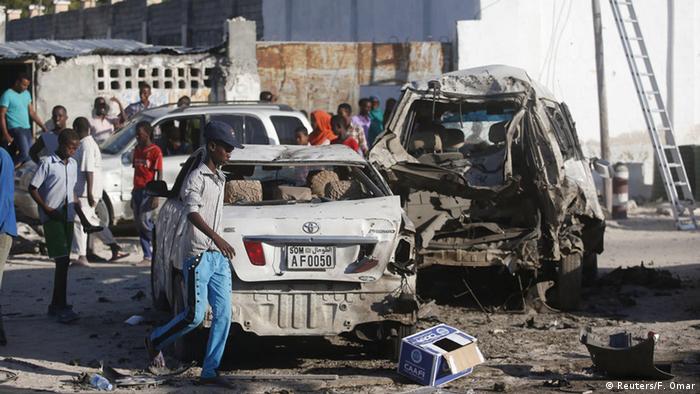 Al-Qaeda linked group is fighting to overthrow the internationally-backed government in Mogadishu. With the attacks becoming more rampant, what does this mean for the future of the country as it prepares to embark on discussions around elections and political developments? On Monday the group attacked an AU military base in Somalia killing an unspecified number of soldiers. On Thursday, the group attacked a restaurant in Mogadishu killing 20 people, mostly civilians.

DW spoke to Laura Hammond, a senior lecturer in development studies at the School of Oriental and African Studies (SOAS) in London to get her views on the recent developments.

DW: What do you make of the attacks and what does it tell us about the state of affairs in Somalia, considering that attacks are happening one after the other?

Laura Hammond: I think this particular attack is significant because of course it is an attack on a civilian target whereas last week we saw al-Shabab attack a Somali military base. This one was very much aimed at civilians. That really adds to the tragedy in some ways. I think that al-Shabab is trying to step up its presence seeing that the discussions around elections and political development in the country are starting to take place. They want to demonstrate and remind the country - and the world more generally - that they are still very much a force to be reckoned with.

African Union (AMISOM), UN troops as well as Somali security forces are all fighting al-Shabab. Why have they failed to wipe out the group?

Well they have been able to hold them at bay in some way. They have been able to drive them out of most of the major cities in the country and to make some small inroads into rural areas. But they don't have enough military strength to be able to completely defeat al-Shabab and drive them out of all rural areas. So what happens is that al-Shabab gets driven out of the cities and disappears into rural areas to sit back, wait and regroup. Then they are able to carry out these kinds of visible attacks repeatedly. Al-Shabab also lacks strength. They are not able to be a constant challenge to AMISOM. They can carry out this kind of hit and run, suicide bombing-types of spectacular attacks. But they are not able to carry out that kind of violence out in a concerted way. So each side is hampered in a sense by a weakness of numbers.

In the recent past, Somalia was seen to be emerging from fragility and re-asserting its sovereignty. This meant that the country was finally taking ownership and responsibility for its future. With these kinds of attacks on the rise, do you foresee the country gaining total stability as well as building functional institutions?

Certainly the country has huge challenges in order to build those institutions in the next couple of years as the electoral process is put in place in a transitional period from the current administration to what hopefully will be a more popularly supported government. There will be a lot of uncertainties and a lot of challenges in that process. But at the same time, the country is in a very different place than it was a couple of years ago. I hope and I think that most Somalis see this government and the trajectory that the country is currently on not as one that can be reversed into a state of weakness and state collapse that we have seen prior. So I don't think that it is a process that can be reversed. But I do think that over the next couple of years we are going to see more attacks by al-Shabab because they want to try to stop this process of political consultation from taking place.

In October 2015, the UN Refugee Agency (UNHCR) and the European Union agreed to support and fund the voluntary return of Somali refugees from Kenya. Over $100 million was raised in pledges to help Somali refugees return to their country in what they called "safety and dignity." With these kind of attacks becoming rampant, do you see this plan actually being implemented?

I think it can be implemented, but it must be done in a very slow and careful way and that can only be implemented with people who are willing to return. So the danger is that the pressure is from Kenya in particular to send refugees back to Somalia. This may result in them being obliged to return before they feel able and safe and willing to go back. So there are small numbers of people who have gone back. There are people who seem to have strong family ties, strong business ties, they have the ability to put in place some livelihood and businesses. But that is not the case for the overwhelming majority of refugees who are currently in Kenya, Ethiopia and other countries. In the longer term, the return of refugees should be possible but it needs to be done in a very careful and slow way. It needs to be based not only on the security situation in place in the country but also the ability of the social and economic infrastructure to receive refugees and help them integrate in meaningful ways.

Much as there seems to be overwhelming support from the international community, as well as regional countries and the AU, to support Somalia, there seems to be a lot of uncertainty. Do you think there is any danger of Somalia turning into a haven for Islamic militants?

Well, to some extent it has become a haven for Islamic militants. I think that, from al-Shabab's perspective, they see this fight as a long-term battle. So even if AMISON were able to achieve short-term military gains, it is a long-term battle that they are fighting and there has to be commitment from the part of Somali national military forces, as well as the region and the wider international community, to take that on as a long-term struggle. As long as there is a possibility of capitalizing on the people's impatience and frustration with the slow pace of change with the political transformation going on in Somalia, al-Shabab will try to capture that and win supporters. The problem is that from their perspective, they haven't got anything better to offer. They haven't got a government agenda and they are not at all able to lead the country itself. So as much as they can carry out these really devastating and tragic attacks, like the ones we have just seen, that is all they are able to do at the moment.

Dr. Laura Hammond, is a senior lecturer in development studies at the School of Oriental and African Studies, London.

Islamist gunmen have attacked a beachside hotel and a restaurant popular with government officials in Somalia's capital. The security forces were battling the assailants at the scene. (21.01.2016)