US President Barack Obama has addressed the Kenyan nation shortly before concluding a historic visit to the country. He urged Kenyans to remain united to ensure a prosperous future, emphasizing equal rights for women. 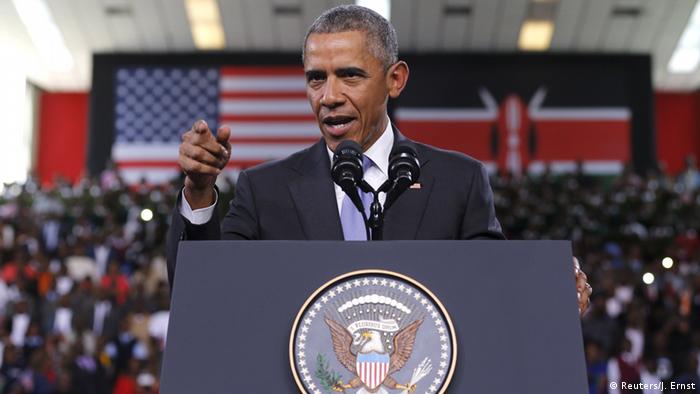 In his televised address before an audience of thousands of invited guests packed into Nairobi's Kasarani stadium, Obama first thanked Kenyans for their hospitality during his visit, saying he was proud to be the first US president to come to Kenya - adding, in a humorous aside, that he was also proud to be the first Kenyan-American president of the United States.

In the speech, Obama said Kenya was at a crossroads, "a moment filled with peril but also with enormous promise."

He praised the advances made by Kenya in recent years, saying Kenyans had chosen to stay together rather than fall apart on ethnic lines, and that the country was one that observed freedom of the press.

However, he also pointed to the unequal distribution of wealth, saying that regional disparities should be removed.

Echoing comments made on Saturday at a press conference with Kenyan President Uhuru Kenyatta, Obama called for more action against corruption, saying it was important not to accept it as an established tradition.

To combat corruption, which he described as "an anchor that weighs you down," it was necessary to change habits and culture, he said.

He also called on Kenyans to remain united, saying that politics "based on tribes and ethnicity" was "doomed to tear a country apart."

Obama also placed great emphasis on the role played by young people in advancing a country, saying African youth was going to take the continent "to new heights."

He said it was important to see such practices as "bad traditions," and said that according equal rights to women and girls was essential if Kenya were to make progress.

Educating girls was one of the most successful developmental policies, he said.

In concluding remarks, he promised Kenya the continued support of the United States.

Although admission to the event was by invitation only, thousands of people approached as close to the stadium as security precautions allowed in the hope of catching a glimpse of the president's motorcade. 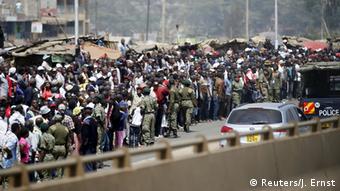 Thousands line up to catch a glimpse of Obama

Obama is scheduled to speak with young Kenyan people and to meet with leaders of Kenya's civil society before leaving late on Sunday evening for Ethiopia, which like Kenya will be receiving its first-ever visit from a sitting US president.

In the capital, Addis Ababa, he has planned meetings with the prime minister and president, as well as with the leaders of Ethiopia, Kenya and Uganda to discuss the situation in South Sudan, which is in the grip of a 19-month civil war marked by horrific atrocities.

He is also to hold a speech at the African Union headquarters in the Ethiopian capital, the first address by a US president to the 54-nation body, which is tasked with promoting peace, cooperation and security on the African continent.

"This [visit] will bring the relationship between our countries to a new high," Ethiopian foreign ministry spokesman Tewolde Mulugeta said ahead of Obama's visit.

Ethiopia is one of Washington's key security partners and like Kenya has troops in Somalia as part of an AU and US-backed force fighting al-Shabab militants.

However, rights activists have urged Obama to address issues of political and democratic rights in the country, which groups such as Amnesty International have accused of implementing repressive policies and violating human rights.

The group Reporters without Borders has also appealed to Obama, saying it was "extremely concerned about the fate of those who remain behind bars" and arguing that "Ethiopia's fight against terrorism should not come at the price of freedom of information and of the press."

Barack Obama has become the first sitting US president to visit Kenya. His next stop, Ethiopia, has a poor human rights record, but is strategically important for the US. This may temper Obama's criticism. (24.07.2015)

In Kenya, Obama calls for greater rights for gay community

During a landmark visit to his father's homeland Kenya, US President Barack Obama has called for greater rights for the gay community in Africa. Kenyan President Uhuru Kenyatta has said it was a "non-issue." (25.07.2015)

US President Barack Obama has told a business summit in Kenya that entrepreneurship can foster growth and peace in Africa. His remarks come on the first full day of a landmark trip to the country, his father's homeland. (25.07.2015)

US President Barack Obama has reunited with his extended family on the first evening of his trip to Kenya. In his first visit as US president, Obama is expected to discuss trade and counterterrorism strategies. (25.07.2015)