The Kenyan government has given the UN three months to relocate the world's largest refugee camp over the border to Somalia. Nairobi has vowed a tough response following the recent massacre by Somali jihadists. 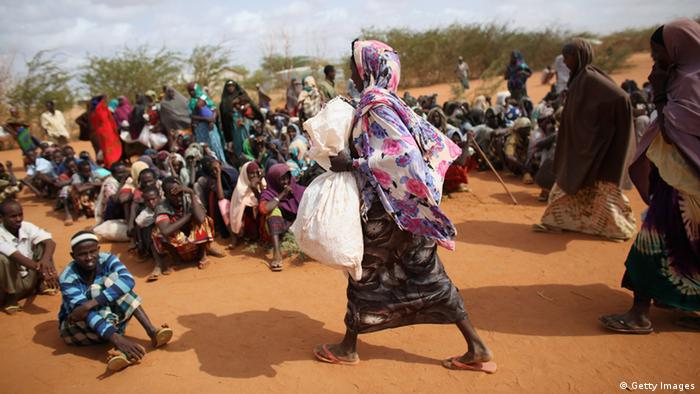 The United Nations Dadaab camp in northeast Kenya houses hundreds of thousands of refugees from war-torn Somalia, and authorities have in the past accused Islamists of hiding within the camp.

"We have asked the UNHCR to relocate the refugees in three months, failure to which we shall relocate them ourselves," Deputy President William Ruto said in a statement on Saturday, adding that the government will secure the country "at whatever cost."

"The way America changed after 9/11 is the way Kenya will change after Garissa," he said, referring to the university where Somali al-Shabab terrorists killed some 148 people earlier this month.

Waiting for a formal request

The camp, about an hour's drive from Garissa town, was established in 1991 and is believed to be the largest refugee camp in the world. It now houses more than 600,000 people, according to Ruto. The United Nations, however, has put the number of registered refugees in the overcrowded complex at around 335,000.

Cases of kidnapping and bombing have been reported in the area since 2011, when Kenyan troops moved into Somalia to help the government in their fight against the al-Shabab militia.

Emmanuel Nyabera, the UNHCR's spokesman in Kenya, said Saturday he could not comment as his organization has yet to receive a formal request to move the camp from the government.

Kenya to 'look after its people first'

Macharia Munene, an international relations professor with the United States International University Africa in Nairobi, told Reuters that the logistics of moving hundreds of thousands of refugees across the border would be "a tall order."

Still, according to Munene, there are now safe areas within Somalia from where Islamist al-Shabab militants had been pushed out by African Union forces during recent years.

"Kenya is in an emergency situation... Each country has an obligation to look after its people first," he said.

On Saturday, Deputy President Ruto also said Kenya had started building a 700-kilometer (440-mile) wall along the entire length of the border with Somalia to keep out members of al-Shabab, and warned that any business that collaborated with the jihadist group would be shut down.

Al-Shabab militants have killed more than 400 people in Kenya in the last two years, including 67 during a siege at Nairobi's Westgate Mall in 2013.