Kashmiri children: The everlasting scars of a deadly conflict | Asia | An in-depth look at news from across the continent | DW | 09.07.2020 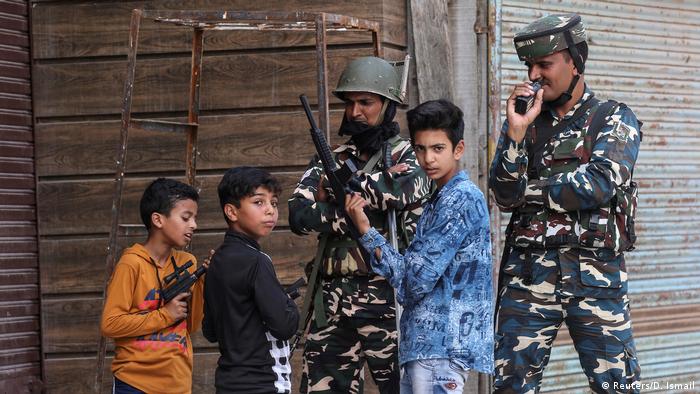 Basim Aijaz was 12 years old when he was killed in an accidental blast near the site of a gunfight in Srinagar, a major city in India-administered Kashmir. His mother, Kousar Jan, is yet to come to terms with her son's untimely death.

Aijaz Ahmad, Basim's father, told DW that his son struggled for life for two days at the Shri Maharaja Hari Singh (SMHS) hospital, where he succumbed to his injuries on May 21.

In another incident, four-year-old Nihaan Yawar, a resident of Kashmir's southern Kulgam district, was killed when insurgents fired at security forces in Anantnag district on June 26. The boy was traveling with his father when a bullet hit him.

Experts say that children in Kashmir are being increasingly exposed to violence, which has plagued the region for decades.

Last week, pictures of a toddler lying on the body of his dead grandfather sparked outrage in India-controlled Kashmir. Bashir Ahmed Khan was allegedly shot dead by Indian police. "Locals said that Khan was brought out of his car and shot dead by the forces," Farooq Ahmed, a nephew of Khan, told the AFP news agency.

Iram, the child's mother, told DW the incident has traumatized her son. "The picture will haunt him for the rest of his life," she said. "He saw his grandfather's dead body and men in uniform all around him. He gets scared now when he hears the word 'police' or when he sees a policeman," Iram added.

The police refuted the family's claims and threatened "legal action against false reports and rumors."

India and Pakistan each rule part of the disputed Himalayan territory but claim it in full. New Delhi accuses Islamabad of backing Kashmiri separatists and militant groups, an allegation Pakistan denies.

In August 2019, Indian Prime Minister Narendra Modi's government stripped Kashmir of its semiautonomous status. Furthermore, the Indian parliament passed a bill to split Jammu and Kashmir into two union territories — Jammu and Kashmir, and Ladakh — which would be directly administered by New Delhi.

Indian PM Modi argues that the move was necessary to curb terrorist activities in the region.

The lockdown that followed last year's abrogation of Kashmir's special status, and later the restriction on movement to contain the novel coronavirus spread, has taken a toll on Kashmir's society, economy and people's mental health.

Schools in Kashmir have been closed for months, and children are unable to go out freely and engage in healthy activities.

"I have not met my friends for a long time. I don't remember how they look and what they are doing right now," Zainad Nissar, a fifth grade student in Srinagar, told DW.

In its report "Children and Armed Conflict," the United Nations said it has "verified the killing (8) and maiming (7) of 15 children (13 boys, 2 girls), between the ages of 1 and 17, by or during joint operations of the Central Reserve Police Force, the Indian Army (Rashtriya Rifles) and the Special Operations Group of the Jammu and Kashmir Police, Lashkar-e-Tayyiba [militant group], unidentified armed elements, or during shelling across the Line of Control [Indian-Pakistani border]."

"Sixty-eight children between the ages of 9 and 17 have been detained by Indian security services in Jammu and Kashmir on national security-related charges, including 1 for actual or alleged association with armed groups," according to the report.

The UN said it remained "concerned by child casualties in Jammu and Kashmir and call upon the government to take preventive measures to protect children, including by ending the use of pellets against children."

A report by the Jammu Kashmir Coalition of Civil Society (JKCCS) said that 318 children were killed in the region between 2003 and 2018.

"Children in Jammu and Kashmir are living in the most militarized zone of the world, with the presence of 700,000 troops, which exposes them to the risk of all six grave violations against children as laid out in the United Nations Convention on the Rights of the Child," the 2018 report said.

According to Khurram Parvez, a Kashmir-based human rights activist, the children in Kashmir are witnessing two types of violence: "The first type is when they are directly affected by killing, torture, arrests; the second is when they see their families suffering," Parvez told DW, adding that these children cannot lead a normal life.

"Their life is shaped by a sense of injustice, and the tendency to accept violence increases with time. All these things have a negative impact on their mental health."