Kashmir: India triggers outrage by expanding voting rights | Asia | An in-depth look at news from across the continent | DW | 19.08.2022 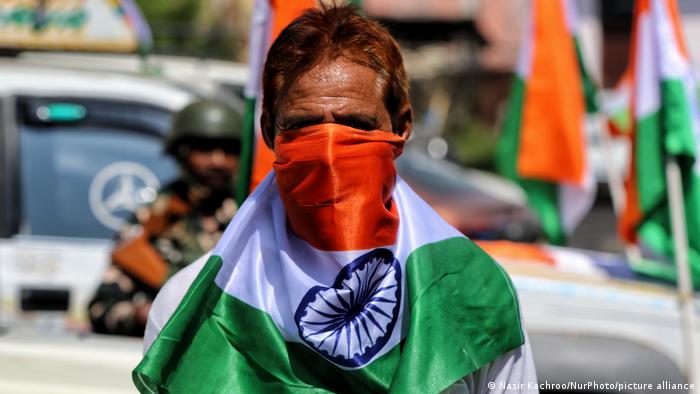 Some Kashmiris fear India is trying to reshape the region's politics

An alliance of Kashmiri political parties has called for a meeting next week to discuss the "inclusion of nonlocals" in the voter list after New Delhi granted voting rights to people from central India living in Kashmir.

The move will allow about 2.5 million potential new voters in India-administered Kashmir to participate in elections set for next year.

Kashmiri political parties have said inflating the voter rolls is an attempt by New Delhi to further cement its influence after the region lost its semiautonomous status in 2019.

India and Pakistan claim Kashmir in full but rule it in part. New Delhi accuses Pakistan of backing Kashmiri separatists militarily, a claim denied by Islamabad.

According to India's last census, taken in 2011, India-administered Kashmir had a total population of about 12.3 million.

"If 2.5 million BJP voters come from the outside, what value will remain for the voters of Jammu and Kashmir?" Mufti said, referring to India's ruling Bharatiya Janata Party, which has pursued Hindu nationalist policies since coming to power in 2014 under PM Narendra Modi.

Kashmiris have long accused Modi's government of trying to alter Kashmir's demographics by encouraging Hindu migration to the Muslim-majority region.

Ather Zia, a political anthropologist from the University of Northern Colorado in the United States, told DW that the BJP is "oiling the wheels of settler colonialism" in Kashmir.

"This latest hegemonic move is free for all, and it is geared towards full and final dispossession of indigenous Kashmiris," she said.

Kashmir resident Reyaz Ahmad told DW that the expanded voter list is an attempt by New Delhi to "perpetually disempower the local population."

"By this tactic, New Delhi wants to control the narrative and sell that Kashmiris have chosen them," Ahmad said. "This will give power to outsiders — and locals will have to beg to maintain influence."

"We believe in the constitution, and the 'one vote, one nation' theory. Our constitution allows every Indian citizen the right to vote, and now no one is an outsider here," Sethi said, adding that the regional political parties should follow the constitution.

What has changed in Kashmir?

On August 5, 2019, New Delhi arbitrarily stripped Kashmir's limited autonomy by amending Article 370 of the Indian constitution, therefore allowing non-Kashmiris to own land and apply for government jobs, which, up to then, had been reserved for Kashmiris.

The Indian government also bifurcated the region into two federally governed territories of Jammu & Kashmir and Ladakh and also introduced a slew of new laws, which critics and many Kashmiris fear could change the demography of the region. 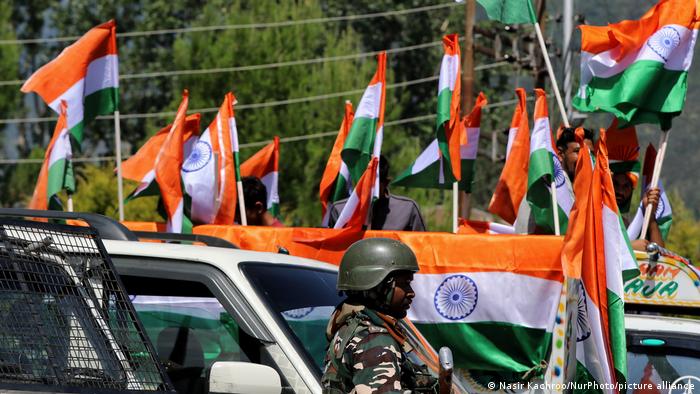 Since 2019, India has cracked down on resistance to its administration of Kashmir

After abrogating the region's autonomy, New Delhi abolished permanent citizenship and started granting domicile certificates to every Indian citizen who had been living the region for at least 15 years.

Thousands of migrant laborers, Indian employees, and Hindu refugees who had been living in different parts of the region's Jammu province were given domicile and voting rights.

Before 2019, the electoral rolls for local elections only allowed voting rights to permanent residents of India-administered Kashmir.

The region's chief electoral officer, Hridesh Kumar, told DW that the new rules would allow "any citizen of India who has attained the qualifying age of 18 years and ordinarily residing" in India-administered Kashmir to be eligible to vote.

Kumar said there was no need for a person to have a domicile certificate from India-administered Kashmir to become a voter.

He said non-Kashmiri employees, students or laborers could sign up to vote. This would also include members of the Indian armed forces posted in Kashmir.

The change in voting laws has also seen rising animosity from Kashmiris against people seen as outsiders.

Kashmiri Pandits (Hindus), who had returned to the region, have especially been targeted, forcing them to flee again.

The Resistance Front (TRF) is a Kashmiri Islamist militant organization that was formed in 2019. The TRF targets what it sees as Indian interests in Kashmir, including the military.

In a recent social media post, the TRF said it would "accelerate attacks and prioritize targets" in response to the voting rights change, calling it "demographic terrorism" from India.

The group said it would target all non-Kashmiris including employees, businessmen, tourists and even beggars.

Indian troops continue to fight an anti-India insurgency in Kashmir.

Officially India does not reveal the number of troops deployed in Kashmir. However, according to reports, nearly 1 million soldiers are posted in the region.

There are fears that if Indian soldiers sign up to vote, it could further sway politics away from Kashmiris and increase tensions.

India: Why are Kashmiri Pandits fleeing so soon after resettlement?