Kashmir: India tightens grip on government-critical state employees | Asia| An in-depth look at news from across the continent | DW | 04.06.2021

A series of dismissals of public servants in Kashmir has triggered fears that India is clamping down on state workers in the region. The dismissals were issued under the pretext of protecting "state security." 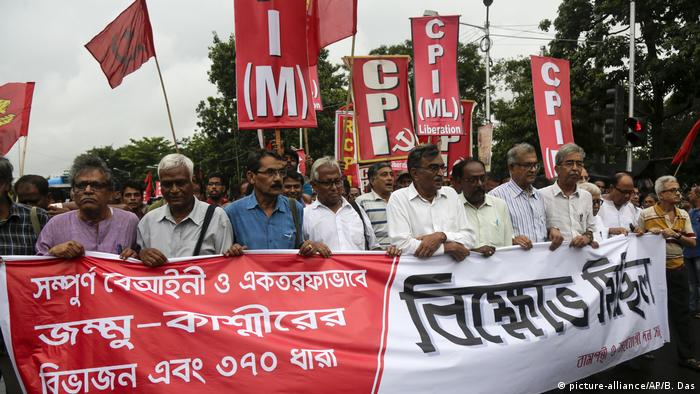 Muhammad Yusuf Ganaie, a schoolteacher in Indian-administered Kashmir, found out that he was fired from his job through a Facebook post last month.

He was the sixth employee in the region to be sacked under the pretext of protecting the "security of the state," and the series of dismissals has sparked fears of a widespread effort to tighten the political reins on public servants in the region.

The General Administration Department issued the order on May 20, shocking Ganaie's family members.

No specific reasons were given for the sackings, and the six employees affected so far include three teachers, an assistant professor, a police officer and a revenue official.

Critics have called the latest dismissals an effort to intimidate public servants and those who have participated in anti-India protests.

"This order is a harsh punishment," Ahmad said.  "This is harming the future of my brother's children," he added.

Ahmad said that his brother, a 42-year-old math teacher at a boys' school, was suspended after being accused of throwing stones during mass uprisings in 2016 against the killing of young insurgent commander Burhan Wani.

After spending a year in jail, Ganaie was again arrested in 2019 when the region's government launched a massive clampdown on leaders, traders and young people.

"He spent two years in jail, and he was hopeful that he would be reinstated. But now his dismissal comes as a shock to the whole family," Ganaie said.

On the day that he was sacked, a similar order of dismissal was issued for two more people, including a teacher from the same district and Devinder Singh, a police officer who was suspended after being caught last year with a Hizbul Mujahideen militant while traveling in a car in south Kashmir.

"Dismissing them without mentioning the reason is not justifiable," Ahmad added.

On April 27, the regional government, which underwent many political changes after being stripped of its limited autonomy in August 2019, ordered the formation of a special task force to scrutinize the cases of employees suspected of being involved in "anti-national activities."

The six employees were fired under an article of the constitution that gives the government authority to remove a public servant from their role without any inquiry.

Critics say the article, which was implemented in 2019, is meant to "instill fear and silence among Muslims in the region."

Muhammad, 43, a government employee from the southern district of Shopian, also feels that the dismissals are discriminatory.

"They can fire anyone, and it's an attack on us because of our religious identity,” Muhammad said.

"At some point in time, everyone, including small children or even women, have been part of the anti-India protests," he said.

The Jammu and Kashmir government is the largest employer in the region, with nearly 450,000 employees.

On March 3, the regional government passed an order saying that no new employee would be paid their salary or allowances until they had undergone a verification process by the top investigative agency, the Criminal Investigation Department (CID).

The government made a change to the Jammu and Kashmir civil service regulations, allowing the authorities to forcibly retire any public servant over 48 years old or who has completed 22 years of service. Many have said the change was politically motivated.

An official involved with the development told DW that the changes are, however, not religiously or regionally motivated.

"Some elements are trying to present it as religiously motivated, but it is not," the official said, adding that all of the employees dismissed so far have been "involved in anti-national activities."

Another official said the sackings took place after finding "proper evidence" of such activities.

"Some people are prone to misconduct that leads to violence in society, and they continue to enjoy the privileges of being public servants," the official said.

Political parties in the region have condemned the random firings as "inhuman and cruel."

The National Conference, the pro-Indian political party that has ruled for most of the last seven decades in the region, said the measures would "alienate" people.

"The government should have focused on boosting coronavirus care rather than firing employees in an elusive manner in which they cannot even resort to legal recourse to protect their rights," the party said in a statement.

The pro-freedom political parties led by Mirwaiz Umar Farooq called the actions a form of "harassment of government employees."

"To render people jobless in such a manner by invoking a draconian law is intimidation," said Farooq, who heads the All Parties Hurriyat Conference (APHC), a coalition of separatist leaders in the region.

Meanwhile, Habeel Iqbal, a lawyer based in Kashmir, told DW that dismissing an employee from service "without hearing him is against the basic principles of natural justice.”

"It (dismissal) shall be used in exceptional circumstances, to maintain the larger public good," he said, adding that it's "difficult to imagine how a teacher or an assistant professor could be a threat to the national security of a powerful country like India.

"These decisions are subject to judicial review, and I am hopeful that the courts will quash these dismissal orders," he said.