Two government schoolteachers, one Hindu and one Sikh, were shot dead in Kashmir. The death of the pair means that seven people have been killed in six days in the volatile, contested region. 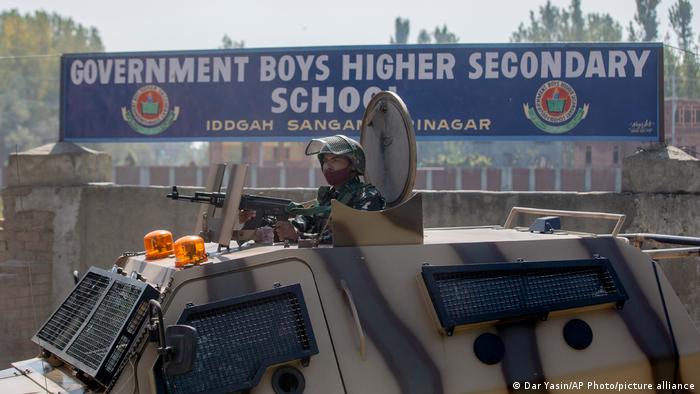 The gunmen arrived at the school and shot the pair, one of whom was Hindu and the other Sikh. No students were present at the time.

Both teachers died on the spot. Authorities cordoned off the school as they worked to track down the perpetrators.

What happened at the school?

"The pistol-wielding men came into the school this morning and asked for the identity cards of the teachers and later fired at two teachers, one each from the minority Sikh and Hindu community," a teacher who did not want to be named told the Reuters news agency.

The attack has been met with widespread condemnation from politicians as well as on social media, in Kashmir and beyond.

"Killing innocent civilians including teachers is a move to attack and damage the age-old tradition of communal harmony and brotherhood in Kashmir," Singh said.

The latest slayings come two days after the killing of three civilians.

In that attack, a newly formed rebel group, the Resistance Front, claimed responsibility for the deaths of a locally known chemist, a street vendor and a taxi driver in separate attacks Tuesday.

A statement issued by the Resistance Front Wednesday claimed that the three people slain Tuesday were working with the Indian authorities.

The militants claimed to have killed the chemist because he was supposedly ideologically aligned with the Rashtriya Swayamsevak Sangh (RSS), the militaristic Hindu nationalist group that Indian Prime Minister Narendra Modi's Bharatiya Janata Party is affiliated with.

On Saturday, two civilians were shot dead in Srinagar, the largest and most significant city in Kashmir.

Twenty-five people are believed to have been killed by rebels in attacks across Kashmir this year.

The Muslim-majority region of Kashmir is divided between India and Pakistan since their independence in 1947, with both claiming the full territory. In India-controlled Kashmir many are opposed to New Delhi's rule.

Militant groups have fought Indian rule over Kashmir since the 1980s. Tens of thousands have been killed, many of them civilians.

Tensions kicked off again in August of 2019, when India did away with the region's semiautonomous status, dividing the region into two federally governed territories.