Karl Marx at 200: What remains of his legacy?

Karl Marx was born 200 years ago and to celebrate, an exhibition in his hometown Trier looks at his life and work. DW spoke to historian Beatrix Bouvier to learn why Marx remains a relevant, if controversial, figure.

DW: Ms. Bouvier, on the occasion of his 200th birthday, Karl Marx is on everyone's minds. What has made Marx into such a mythical personality?

The question is being asked over and over again today as to whether Marx was right after all. Since at least the financial crisis of 2008, Karl Marx is once again being viewed as something of a prophet, or at least a prognosticator.

Were his theories actually prophetic?

The crisis theory that is often quoted today is not one that he was able to develop further. In the "Communist Manifesto," Marx described what he observed in his time and what we are seeing again today, namely the negative consequences and the dynamics of globalization. In the exhibition, however, we take a step back from this view of Marx as prophet.

"Leben.Werk.Zeit." (Ed. Note: "Life.Works.Time.") consists of two exhibitions. What does the visitor expect and what do you want to set straight?

One exhibition is mainly devoted to the stages of his European life path, much of which took place abroad. It becomes clear in this section that Marx shared the same fate as other oppositionists in the 19th century.

In the second section, "Work and Time," it is made clear just how disruptive the time in which Marx lived was, which problems he was faced with personally, and those which were standard for the time. We wanted to ask: what motivated him and how did it come to be that Marx and his ideas were dogmatized and perverted in the 20th century? 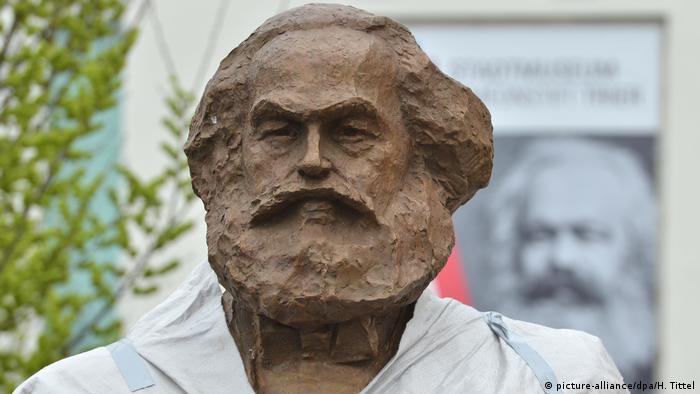 This bust of Marx was a gift to Trier from China

Marx's legacy of Marx is ambivalent. He is used as a legitimate critic of social injustices, but his theories have also been used to justify the actions of terrible tyrants like Stalin and Mao. Where did Marx center himself on this fine line?

Certainly Marx cannot be held liable for what Stalin brought about. Nevertheless, one has to consider where the starting points lie, and these are certainly the dictatorship of the proletariat and the question of violence in revolutions. One has to point out in connection to this that there were gaps in Marx's edifice of ideas.

How perceptive was Marx about the development of capitalism, not only in Europe, but around the world?

He saw that capitalism was developing in a way that was no longer tied to England, but the baton had long since passed to the United States, where it was more dynamic than anywhere on the European continent.

What was Marx's view on the use of violence as a means of achieving the goals if reformist efforts failed?

The question of violence certainly plays a role, but it was precisely in his late years that Marx formulated that the use of force also always depends upon the extent to which it was exercised by the other side, i.e., by the side holding power. For him, it is never about beginning with violence or enforcing any ideas through the use of force. But the notion that violence can play a role has never been denied.

The idea of communism as equality for all has been repeatedly abused in order to maintain power. Would Marx have condoned such oppression? Beatrix Bouvier, former head of the Karl-Marx-Haus says Marx was not dogmatic

No, certainly not. Marx does not stand for oppression or dogmatization. One has to point that out again and again. Another look at Marx might help to understand that things have been distorted.

Marx has been dead for 135 years; yet today his theories not only remain politically relevant, but he has become something of a modern pop star and is, for example, celebrated in street art worldwide. How did this happen?

Marx has tended to be de-ideologized, but this has never been accompanied by depoliticization. Even the presentation of Marx as a pop icon is always associated to some small degree with political provocation.

Marx's birthplace Trier knows how to market the famous son of the city in a wide-ranging way, for instance employing his likeness as a crosswalk figure. What do you make of it?

I find it amusing and think it is a legitimate way to deal with Marx. Former Lord Mayor Klaus Jensen once said: Marx is capital for Trier.

And conversely, what would the capitalist critic Marx say if he saw that his likeness was for sale in the souvenir shop in the shape of a rubber ducky?

Well, he would certainly be "not amused." But I think he may have enjoyed the popularity a little bit, too.

Beatrix Bouvier headed the Museum and Research Center Karl-Marx-Haus in Trier from 2003 to 2009 and serves on the board of the International Marx-Engels-Foundation and the Scientific Advisory Board of the exhibition society Karl Marx 2018.

Why a Marx monument is still controversial in Germany

The German city of Trier is accepting a huge statue of Marx given by the Chinese government. Historian Winfried Speitkamp told DW why such monuments cause dispute in Germany. (15.03.2017)

First published a century and a half ago, Karl Marx's work 'Das Kapital' is still read today. Its German author was the first economist to take on globalization, says Bernd Ziesemer in an interview with DW. (13.09.2017)

A giant bronze statue of the namesake of Marxism has arrived in the German city of Trier, where the revolutionary socialist thinker was born 200 years ago. The artwork, a gift from China, didn't please everyone though. (06.03.2018)

Karl Marx on the streets of Berlin