The British barrister inherits a string of open investigations, including contentious probes into the Israel-Palestinian conflict and alleged US war crimes in Afghanistan. 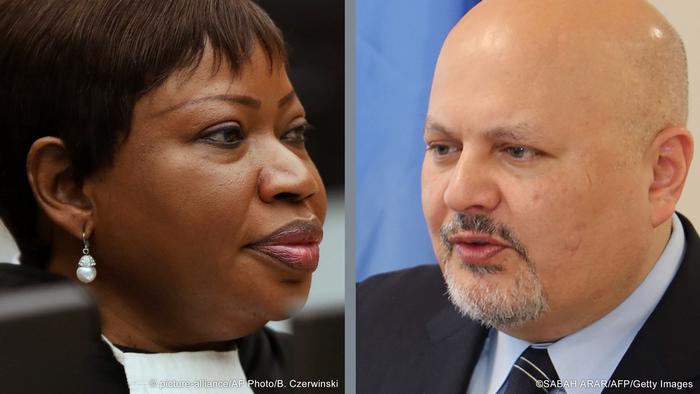 Karim Khan has started a nine-year term as top prosecutor at the ICC, taking over from Gambia's Fatou Bensouda

British lawyer Karim Khan was sworn in as the new chief prosecutor at the International Criminal Court in The Hague on Wednesday.

The 51-year-old replaces outgoing prosecutor Fatou Bensouda of Gambia, who extended the war crimes court's reach during her nine-year term.

"I solemnly undertake that I will perform my duties and exercise my powers as prosecutor of the International Criminal Court honorably, faithfully, impartially and conscientiously," Khan said at the swearing-in ceremony.

He inherits a series of challenges from his predecessor, including investigations into alleged crimes in the Palestinian territories, Afghanistan, Myanmar and the Philippines.

Who is Karim Khan?

During a career spanning decades, he has argued in all the major international courts and conducted high-profile probes, including a special United Nations investigation into crimes by Islamic State militants in Iraq.

What challenges await Khan at the ICC?

Khan has been left with several probes to tackle, among them an investigation into the politically fraught Palestinian-Israeli conflict and alleged war crimes by the US in Afghanistan.

"He's inheriting far too many situations for the office of the prosecutor, there is no way they can investigate them all," Kevin Heller, professor of international law at the university of Copenhagen, told Reuters.

Khan will also have to contend with opposition from key countries that that have refused to join the ICC, such as the US, Russia, Israel and China.

Former US President Donald Trump hit Bensouda with sanctions after her decision to examine allegations that US troops had committed war crimes in Afghanistan, as well as alleged Israeli atrocities in the Palestinian territories. Biden lifted those sanctions, but Washington says it still opposes the ICC's attempts to claim jurisdiction over US or Israeli military personnel.

Khan also takes over at a time when the ICC is facing criticism for sluggish progress and the high salaries of its judges. An independent expert review last year called for reforms after describing a "culture of fear" in the office of the prosecutor.

"The ICC is in a crucial phase, it has faced criticism for not being as effective as states have wished," said Carsten Stahn, international criminal law professor at the University of Leiden. He added that Khan could bring "new momentum" and had a "window of opportunity to amend the functioning" of the court.

Rights organization Amnesty International said Khan's appointment was a chance for "revitalization" of the ICC.

What legacy will Bensouda leave behind?

Bensouda's leaves the tribunal with a mixed record. She is credited with extending the ICC's reach and securing high-profile convictions against Ugandan child soldier-turned-warlord Dominic Ongwen and Congolese warlord Bosco "Terminator" Ntaganda.

But she also suffered a number of key defeats, including the acquittal of former Ivory Coast president Laurent Gbagbo. Under her leadership, former Democratic Republic of Congo vice-president Jean-Pierre Bemba was also acquitted on appeal, and Kenyan President Uhuru Kenyatta had charges against him dropped.

In the final days in her post, Bensouda asked judges to open a probe into killings during the Philippine government's war on drugs. A spokesperson for Philippine President Rodrigo Duterte said his country — which withdrew from the ICC in 2017 — would not cooperate with the investigation.

"She very bravely and courageously faced down outrageous threats and sanctions so she will be remembered ultimately as someone who started to move the ICC in a very courageous direction."