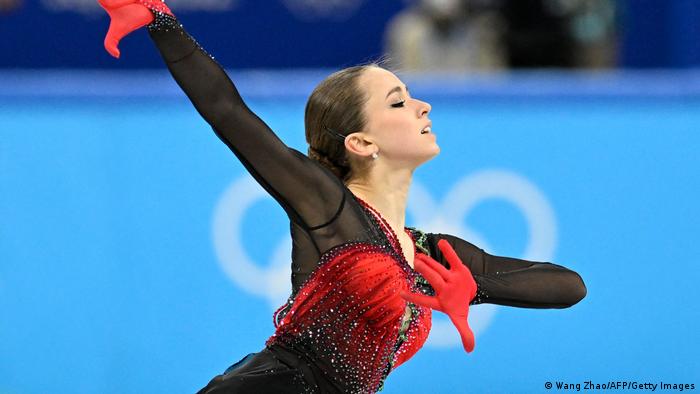 A glass of water containing traces of her grandfather's heart medication may have been responsible for Kamila Valieva's positive doping test, the Russian figure skater's legal team has claimed.

"There can be completely different ways how it got into her body," Valieva's lawyer Anna Kozmenko told the Court of Arbitration for Sport (CAS) panel on Sunday, according to Russian newspaper Pravda. She said that explained the presence of traces of the banned substance trimetazidine.

"For example, her grandfather drank something from a glass, some saliva got in, this glass was somehow later used by an athlete. Or the drug was laid down on some surface, traces remained, the drug lay down on this surface, which the athlete then drank," Kozmenko is reported to have said.

The New York Times has meanwhile reported that two legal substances used to improve heart function, L-carnitine and Hypoxen, had also been found in her blood.

The CAS said on Monday that banning Valieva from competing in the individual figure skating event would have caused "irreparable harm" to the teenage athlete. She will be able to take her place on Tuesday, and is the favorite to win gold.

Valieva herself confirmed she had testified at the CAS hearing, which she said lasted seven hours and left her "emotionally fatigued."

"These days have been very difficult for me, emotionally," she told Russia's TV Channel One. "I am happy but emotionally fatigued. These are tears of joy and a little bit of sadness. But of course I am happy to take part in the Olympic Games and I will do my utmost to represent our country.

"Apparently, this is a stage I have to live through," she continued. "I am hearing so many good wishes [from back home]. I have seen all the banners in Moscow, which is very pleasing. This support is very important for me in this difficult time. I thought I was alone but my closest friends and family will never abandon me."

Valieva has been at the center of a storm of controversy involving several of sports' most powerful governing bodies after testing positive for a banned substance on December 25.

The result of the positive drug test was not revealed until February 8, after she had won gold in the team event at the Winter Games, landing the first quad jumps ever completed in the women's Olympic competition.

While the CAS emphasized the "serious issues of untimely notification of the results" in its decision, it added that "such late notification was not her fault, in the middle of the Olympic Winter Games."

They also noted that Valieva's age means she is a "protected person" under WADA rules, citing that as one of the exceptional circumstances underpinning the decision.

The US took silver in the team event, and would be upgraded to gold if the Russians were eventually to be stripped of their title. But Kate Hartman, their Olympic and Paralympic spokeswoman, said that isn't the most important thing.

"For us, this is less about medals and more about protecting the sanctity of fair and clean sport and holding those accountable that don't uphold the Olympic values," she said. The US Olympic Committee added in a statement that: "This appears to be another chapter in the systemic and pervasive disregard for clean sport by Russia."

David Howman, WADA's former director general, said there were still plenty of questions to be answered.

"If the sample was taken... before the Games, why didn't RUSADA push the Swedish lab to get the results?" he asked. "The other responsibility is with WADA. They knew what samples would have been taken and needed to be analyzed.

"And thirdly, the International Skating Union (ISU) would have known the samples that would have been collected."

In a statement, WADA claim the relevant sample "was not flagged by RUSADA as being a priority sample" and therefore "the laboratory did not know to fast-track the analysis of this sample."

"The lab was experiencing delays for reasons outside its control and was focusing on high priority samples as a result," WADA spokesman James Fitzgerald told DW.

Even Russia Olympic Committee (ROC) President Stanislav Pozdnyakov said: "It looks very strange that the sample traveled from St. Petersburg to Stockholm for almost a month. This raises very serious questions for me, and it is very likely that someone held this sample until the end of the team figure skaters competition." 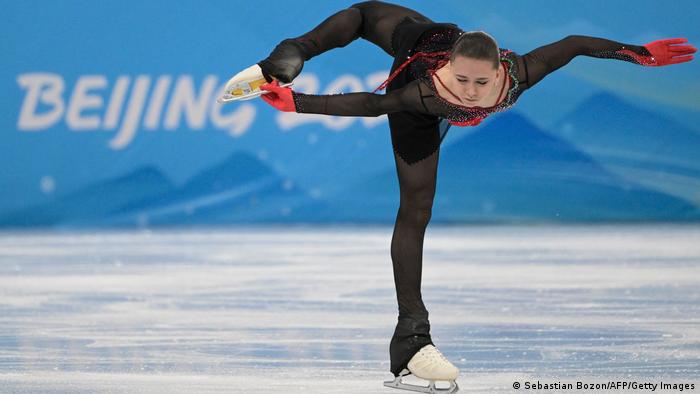 Valieva has performed moves never seen before at the Olympics

But the ROC itself has played it straight.

"Valieva currently has the right to train and compete to the fullest extent without restrictions unless the Court of Arbitration for Sport rules differently regarding her status in relation to the Olympic Games," it said in a statement.

"The Russian Olympic Committee shall take comprehensive measures in order to protect the rights and interests of the members of the ROC Team and to preserve the honestly won Olympic gold medal."

The IOC later announced that the team figure skating medal ceremony, on hold for the last week, will not take place in Beijing at all following Valieva’s positive drugs test. The same will apply if she wins an individual medal.

A final decision is expected only once the full case has been dealt with. That could be after the Games end on February 20.