Justice is debatable in Texas death penalty case | World| Breaking news and perspectives from around the globe | DW | 12.11.2012

Larry Swearingen faces imminent execution in Texas for a crime that forensic scientists say he could not have committed. His time is running out. 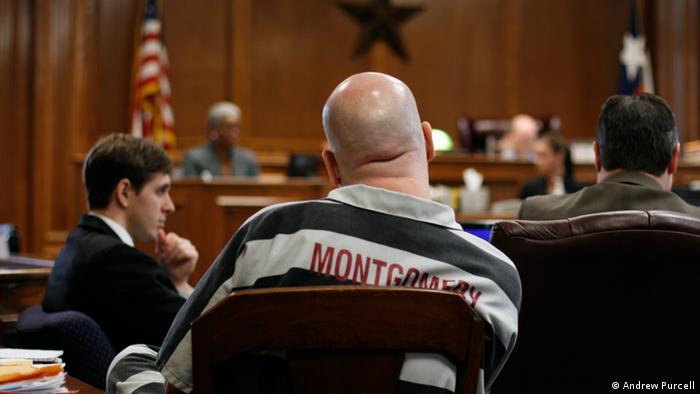 In his 12 years on death row, Larry Swearingen's execution date has been set three times. Three times he has known when he will be strapped to a stretcher and put down with drugs: sodium thiobarbital to anesthetize him, pancurium bromide to paralyze his muscles and potassium chloride to stop his heart.

In January 2009, he had written his goodbyes and was on his way to the chamber when the stay of execution came through. "The way I had to look at it was 'I'm just gonna lay down and go to sleep,'" he said. "I wasn't gonna grovel. I wasn't gonna sit there and cry. I can't be remorseful for a crime I didn't commit."

Swearingen lives at the Allan B. Polunsky unit, an hour or so north of Houston, together with around 300 men and women awaiting execution for capital crimes committed in Texas. He is kept in solitary confinement 24 hours a day, in a cell not quite four meters long (13 feet) and a little over two meters wide, with a slit above head height, more a vent than a window.

Swearingen is strikingly calm, his voice rarely rising, even as he complains about the injustice of being locked up for a murder that forensic science shows he cannot have committed. "It's not easy being here," he says. "There are men who are hanging themselves, men who are cutting themselves, men sitting in their own feces, men slowly losing their minds. If people think it's easy they are sadly mistaken." 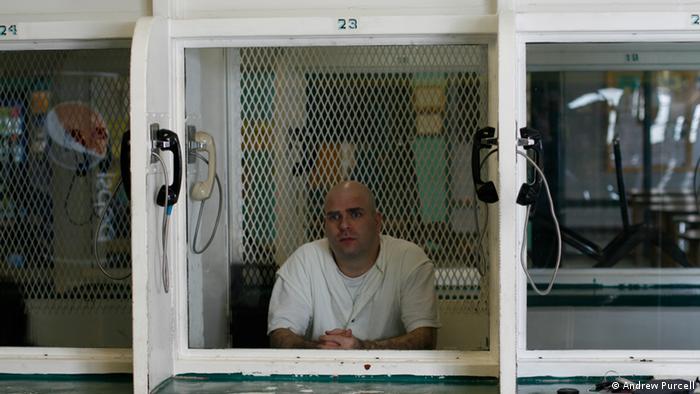 Swearingen has spent over a decade on death row

Supporters of the death penalty argue that the USA's appeals system is so thorough that no innocent person has ever been executed.

In recent years, that faith has been shaken by a number of high-profile cases. Todd Willingham was executed in Texas for setting the house fire that killed his two young daughters, despite several of the country's most prominent arson investigators testifying that the blaze almost certainly started by accident. Troy Davis went to the chamber in Georgia for shooting a policeman, despite a lack of DNA evidence and seven out of the nine prosecution witnesses later changing their stories.

Swearingen's case is different, in that forensic science provides him with an alibi: He cannot have raped and murdered his supposed victim, because he was already in prison when she was killed.

Melissa Trotter disappeared on December 8, 1998. Swearingen was one of the last people to see her alive, at Montgomery College. Three days later police picked him up on outstanding arrest warrants for minor offences, put him in jail and began to build a case against him.

Trotter's body was discovered on January 2, 1999, in the Sam Houston National Forest, by hunters looking for a lost gun. At first glance, they thought it was a mannequin, dumped in the woods. She was wearing jeans, but her torso was naked. She had been strangled with one leg of a pair of tights. A search team, with cadaver dogs, had passed within 20 meters of the spot a fortnight earlier and found nothing.

At the autopsy, with the district attorney and two of his sheriffs in the room, Harris County's chief medical examiner, Dr. Joye Carter, estimated that she had been dead for around 25 days, which meant she had been killed the day she went missing.

When Carter repeated this at the trial, the defense team let it pass unchallenged. Jurors heard that Swearingen had a history of violence towards women, that he had repeatedly lied to police, that hairs forcibly removed from Trotter's head were recovered from his truck and that the other leg of the pair of tights used to kill her was found in his house. 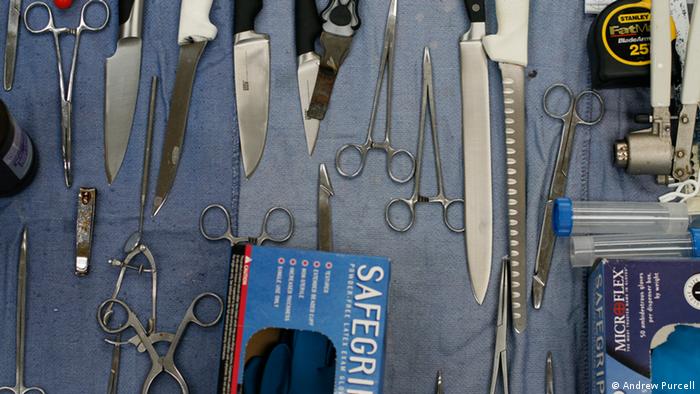 Forensic experts question the results of the autopsy

They were not told that the tights appeared during a fourth police visit to the property, after three prior searches had turned up nothing. The DNA under Trotter's fingernails, belonging to somebody other than Swearingen, was dismissed as a contaminant - perhaps a drop of blood from a cut in a forensic technician's hand.

Science vs. the courts

Dr. Stephen Pustilnik, chief medical examiner for nearby Galveston County, says the autopsy results aren't credible. Although there were signs of decomposition around Trotter's head, her corpse was in remarkably good condition.

"For many days, where she was found, it was 72 degrees Fahrenheit [22 degrees Celsius]," he said. "If you're at that temperature for three days, you're green, bloated and stinky. Her internal organs look beautiful." 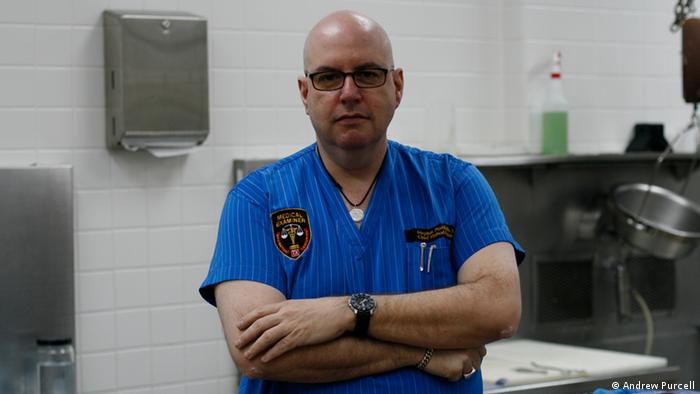 At the morgue, her heart, liver, lungs and spleen were remarkably intact.

Pustilnik said the body could not have been dead for 25 days. Several other forensic scientists called by the defense team have come to the same conclusion. It means that Swearingen could not have killed Trotter, because he was already in jail when she died.

I returned to Montgomery County for Swearingen's final evidentiary hearing. The case has been going back and forth between Judge Fred Edwards and the Texas Court of Criminal Appeals (TCCA) for years: Each time, Edwards has upheld Swearingen's conviction and each time the appeals court has granted the defense one more hearing. This was categorically his last.

Swearingen sat with his defense team, feet shackled together, wearing a striped Montgomery County Jail jumpsuit. In the pews on the right, behind the district attorney's table, Sandy and Charlie Trotter were surrounded by supporters holding pictures of Melissa. They are convinced Swearingen is guilty and need him to be gone, so they can grieve in peace. Sandy handed me a photograph of her daughter, but was too upset to talk.

The benches on the left were empty, apart from a couple of local newspaper reporters and a frail-looking woman taking notes. Pam Martinez, Swearingen's mother, attended every day of the hearing, even though she had recently had heart surgery for the second time.

This time, too, Judge Edward upheld the conviction. Now the case goes back to the TCCA. If the panel again upholds Swearingen's conviction, he will have run out of options. His "actual innocence" petition to the Supreme Court has been denied. Any further appeals will be summarily rejected. A new execution date will be set and, barring an unprecedented last-minute pardon, he will be taken to the execution chamber at Huntsville and put down. 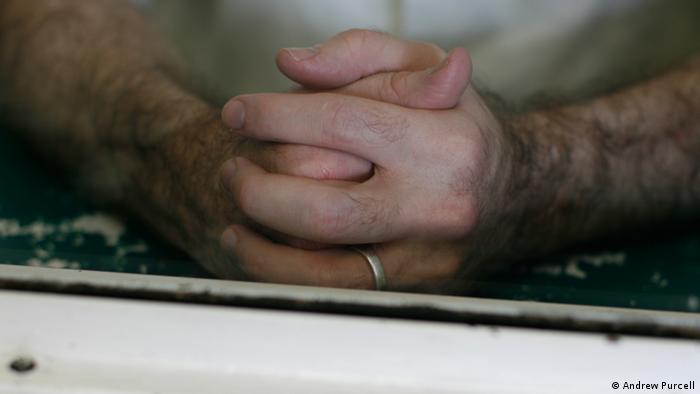 Swearingen knows his chances are slim. "Under federal law in the United States being innocent does not matter," he said. "If being innocent makes no difference, this country is no better than Iran or Syria, these third-world countries that kill their own citizens. How can being innocent not matter?"

The TCCA's ruling is expected in the coming months.

'Mentally retarded' man executed in US

An African American man has been executed in the US state of Texas despite claims that he was mentally disabled. Human rights groups have condemned the act. (08.08.2012)

Amnesty: Executions up in 2011, but in fewer countries

At least 676 people were executed in 2011, according to Amnesty International's annual review of worldwide death penalty trends. The death penalty is still in force in 57 countries worldwide. (27.03.2012)

'The death penalty is not justice, it's revenge'

Monday marks the World day Against the Death Penalty. Deutsche Welle spoke to an expert at Amnesty International about the recent Troy Davis' execution and the gulf between the US and Europe on the death penalty. (10.10.2011)