US Secretary of State Kerry is meeting with Ukraine's top brass amid the ongoing conflict. Whether the US will provide weapons to Ukrainian troops fighting pro-Russian separatists is the main point on the agenda. 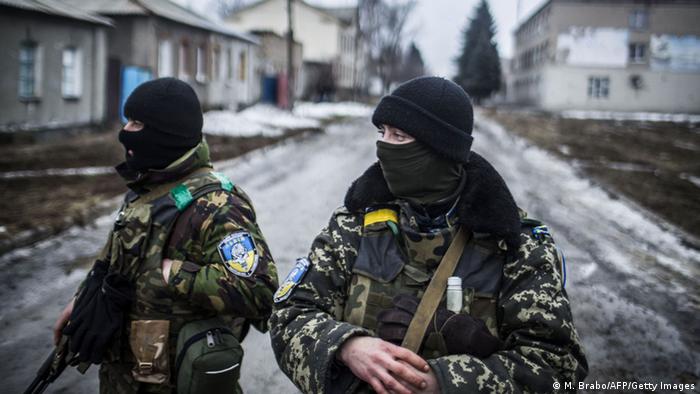 His visit comes amid ongoing battles in eastern Ukraine between Kyiv's troops and pro-Russian rebels and just one day after four civilians were killed in the shelling of a hospital in the rebel stronghold of Donetsk.

Poroshenko has recently requested "more support to Ukraine, including the provision of modern weapons to protect itself and defend itself against the aggressor," he told the German newspaper Die Welt.

"What we need is exactly modern warfare, which we've been lacking all this time," Klimkin told journalists in Kyiv.

Washington divided over arms to Ukraine

The US administration appears to be divided over whether to send weapons to Ukraine, making it unlikely that Kerry will offer Kyiv assurances of military aid. US Vice President Joe Biden has been keen to avoid engaging the US in a proxy war with Russia by providing arms. He told the German daily Süddeutsche Zeitung, "We have said since the beginning that there is no military solution to the crisis. We have no interest in a military escalation and insist on the opposite."

Ashton Carter, however, who is expected to soon be confirmed as the new US secretary of defense, told a US Senate committee, "We need to support the Ukrainians in defending themselves."

The West has issued numerous sanctions against Russia in a bid to get it to stop its aggression in the Ukraine crisis, though Moscow denies playing any part in the conflict. The United States so far has supplied Ukraine with non-lethal military equipment, such as flak jackets, medical supplies, radios and night-vision goggles.

German Foreign Minister Frank-Walter Steinmeier said the time had come for negotiators to return to the table to hammer out a peace deal.

"Our view is that a new efforts for negotiations need to be made to put an end to violence," he said on Thursday while visiting Riga.

Fighting in eastern Ukraine since last April has claimed nearly 5,400 lives, according to UN figures. In the past three weeks alone, around 220 people have been killed.

After his visit in Kyiv, Kerry is set to travel to Germany, where he will participate in the three-day Munich Security Conference. Ukraine is expected to be discussed there as well.

US Weapons to Ukraine: Can the law protect in war?

Heavy fighting in eastern Ukraine and the escalating humanitarian crisis has prompted the US administration to review whether it should supply "lethal assistance" to Kyiv in addition to non-lethal aid. (02.02.2015)

Ukraine says it is hoping to hold new truce talks after negotiations planned for Friday were postponed. Pro-Russian rebels have vowed to push on with a new offensive if negotiations collapse. (31.01.2015)