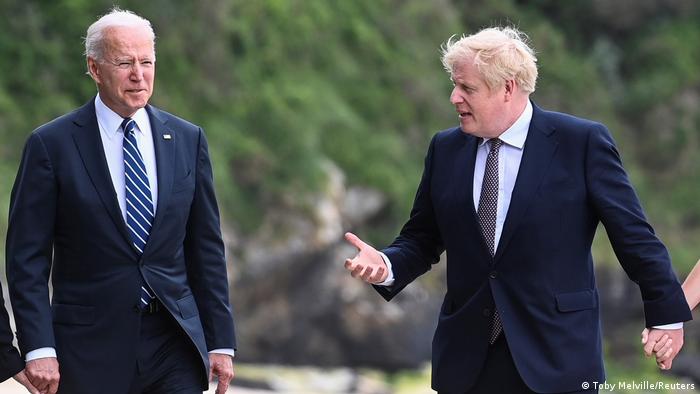 US President Joe Biden and UK Prime Minister Boris Johnson held their first in-person talks ahead of the G7 Summit in Cornwall in southwest England, where heads of state and government from seven wealthy economies will meet on Friday.

"We went on for about an hour and 20 or so. It was a long, good session. We covered a huge range of subjects," Johnson said.

After the talks, Biden told reporters the US and UK are working on updating a new "Atlantic Charter," and said he and Johnson spoke about "a statement of first principles."

The charter is inspired by a document of the same name inked by Winston Churchill and Franklin Roosevelt in 1941.

The document pledges to address challenge posed by countries like China and Russia and  "those who seek to undermine our alliances and institutions.''

It also addresses '"interference through disinformation'' in elections and economic practices, which the West says are being carried out
by governments in Moscow and Beijing.

According to the Associated Press and British media, both countries have also pledged to reopen travel "as soon as possible."

Travel between the US and UK has been greatly reduced for the last 15 months.

Biden: 'We're going to make it clear that the US is back'

Most US travelers cannot travel to Britain without quarantining for 10 days, and UK nationals are simply allowed to travel in the other direction , unless they obtain a waiver from US authorities.

A joint taskforce will be set up to oversee the reopening that include senior UK and US transport officials.

A senior British government source confirmed to DW that there would be no joint press conference with the two leaders on Thursday.

But the meeting had been overshadowed by reports in the British media that Biden would use the upcoming G7 Summit to pressure the UK to resolve its row over Northern Ireland with the European Union.

Senior EU diplomats said on Wednesday that they expected the US president to back their stance over the Brexit deal.

Britain agreed to an effective customs border between the mainland and Northern Ireland in the agreement ratified last year.

It means food products will be subjected to checks before they hit supermarket shelves.

However, Downing Street decided to unilaterally extend a grace period that waived those checks.

It sparked fears in Brussels that post-Brexit Britain could undermine the EU's single market if it decided to diverge on food and agriculture standards.

UK, US cooperating on COVID

Johnson and Biden are also set to announce how both their governments will cooperate on public health policy, with the leaders urging Western nations to share vaccines with poorer countries.

It comes as vaccination rates continue to shoot up in wealthier countries, while Africa is struggling with its own drive.

Some European Union Countries, including France and Spain, are reopening their borders to fully-vaccinated travelers.

Others, like Canada, have had government officials hint at travel restriction updates in the coming weeks.

British health experts have recently noted that the spread of the highly contagious Delta variant in the UK, which accounts for some 90% of cases there

It may delay plans to lift most remaining lockdown restrictions on June 21.

The variant was first identified in India is 40% more transmissible than the Alpha variant.