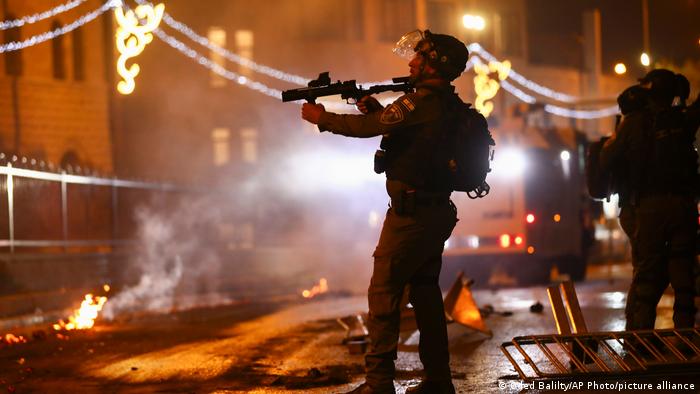 The Israeli Justice Ministry said on Sunday that it was postponing the hearing in a legal case that could see several Palestinian families evicted from their homes.

The announcement comes after several days of clashes in Jerusalem. Scores of Palestinians and several Israeli security forces were injured overnight in violence sparked by a dispute over a land ownership case dating back to before the foundation of the state of Israel.

"In all the circumstances and in light of the attorney general's request, the regular hearing for tomorrow, May 10, 2021, is canceled," the ministry said in a statement. A new hearing will be arranged within 30 days.

The Israel Defense Forces (IDF) tweeted on Sunday evening that two rockets had been fired from Gaza into Israel. One was reportedly intercepted by the Iron Dome Aerial Defense System and no casualties were reported.

Hamas, the ruling Islamist group in Gaza, had threatened attacks against Israel if the case against the Palestinian families went ahead.

Israeli police spokesman Eli Levi said on Sunday that there were no plans to cancel Monday's annual Jerusalem Day parade — typically attended by hardline nationalist Israelis — which will pass through some of the most hotly contested areas of the city. The decision has been criticized potentially stoking further unrest.

What happened during the overnight clashes in Jerusalem?

A spokesman for the Palestinian Red Crescent told the AFP news agency that 90 people had been wounded in the violence that saw stun grenades and rubber bullets fired to disperse the crowds after a fresh night of protests.

Around 300 Palestinians have been injured since the violence began on Friday, medics reported.

Israeli police said that 17 officers were injured over the weekend.

The latest overnight clashes took place outside Jerusalem's Old City — a city claimed by both Israelis and Palestinians as their natural capital due to the important role it plays in both the Muslim and Jewish religions.

Israeli police had cordoned off areas of the Old City to prevent gatherings and cracked down on protesters in a show of force that threatened to deepen the holy city's worst religious unrest in several years.

More than 90,000 Muslims had gathered at the Noble Sanctuary — known to Jews as the Temple Mount — where the Al-Aqsa mosque is located, to pray during a date with religious significance for Muslims, news agency dpa reported.

Envoys from the four members of the so-called Middle East Quartet — the US, Russia, the EU, and the UN — expressed "deep concern" over the recent unrest.

"We call upon Israeli authorities to exercise restraint and to avoid measures that would further escalate the situation during this period of Muslim Holy Days," the statement said, insisting that "all leaders have a responsibility to act against extremists and to speak out against all acts of violence and incitement."

Tunisia said that the UN Security Council would hold a closed-door meeting on Monday, following its request, to discuss the violence.

The US State Department also called on both sides to "avoid steps that exacerbate tensions".

The United Arab Emirates, Bahrain, Morocco and Sudan, all of which have normalized relations with Israel in the past year, condemned Israel's actions and expressed support for the Palestinians.

Pope Francis also called for an end to the clashes. "Violence only generates violence. Let's stop these clashes," he said. "I pray so that this might (Jerusalem) be a place of encounter and not violent clashes, a place of prayer and of peace."

Jordan warned Israel on Sunday to stop what it described as "barbaric" attacks on worshipers in the Jerusalem Al-Aqsa mosque and said it would be stepping up international pressure.

The kingdom, which has custodianship of Muslim and Christian sites in Jerusalem, said Israel should respect worshipers and international law safeguarding Arab rights in the disputed city.

He called on the United Nations, the Organization of Islamic Cooperation, and other international organizations to take action. 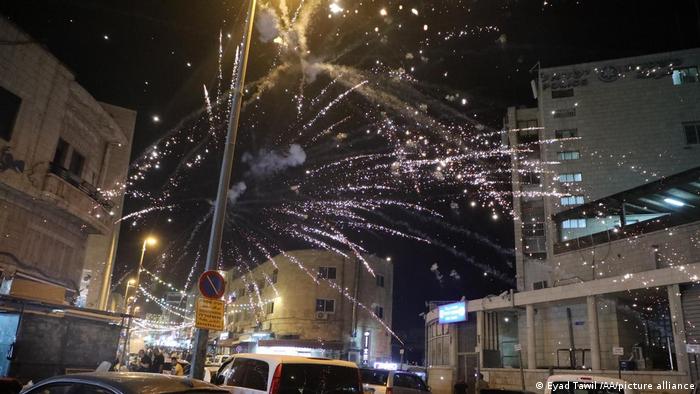 More than 200 people have been injured in clashes over the past two days.

"Israel is acting responsibly to ensure respect for law and order in Jerusalem while allowing freedom of worship," he said.

Israel also suspended entry to 350 Gaza merchants on Sunday until further notice, due to the surge in violence in Jerusalem.

Police Commissioner Yaakov Shabtai said extra officers had been deployed in Jerusalem on Saturday to "enable freedom of worship and maintain order and security."

"At the same time, we will not allow violent riots, lawbreaking, or the harming of police officers. We ask everyone to calm the spirits and violence, particularly on such an important day for the Muslim religion," Shabtai said in a statement.