A chef in the northern seaside town of Heringsdorf has created a 182-kilogram portion of jellied fish called Fischsülze. The German delicacy contains minced fish, vegetables and spices — all packed in gelatin. 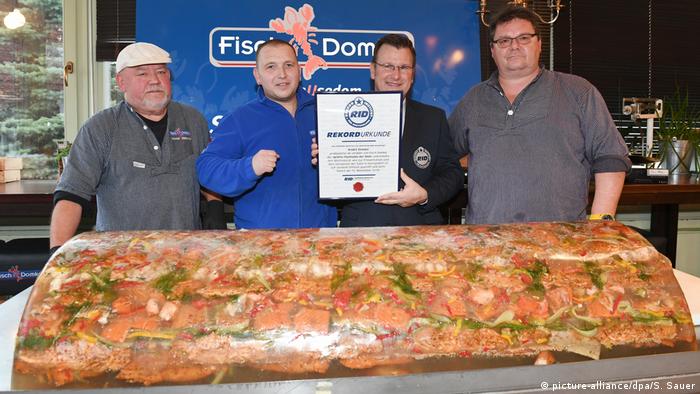 Customers of the Fischpavillon Domke restaurant in the northern German town of Heringsdorf were treated to a serving from the world's largest Fischsülze, or jellied fish, on Sunday.

Weighing in at 182.4 kilograms (401.2 pounds), the dish fulfilled the conditions to qualify for a new record, according to judge Olaf Kuchenbecker from the German Record Institute.

To beat the record, the dish had to weigh at least 90 kilos and was not allowed to fall apart.

The delicacy consists of mostly fish, vegetables and spices, and is served up in a solid gelatin form.

After its wobbly weigh-in, the savory jelly was served up by chef Andre Domke to customers, accompanied by roast potatoes and remoulade sauce.

Usedom - Perfect for an Autumn Getaway

Usedom - Perfect for an Autumn Getaway

German foods that are tastier than they sound

You can argue about just how tasty German cuisine is. But these dishes have such quirky names, you just have to sink your teeth into them. Here's a look at our favorite 10 unusually named dishes. (05.09.2018)