Jeb Bush calls for more US troops in Eastern Europe

Jeb Bush and Poland's President-elect Andrzej Duda exchanged ideas about political campaign strategies during a meeting on Thursday. The Republican called for a military boost in Eastern Europe. 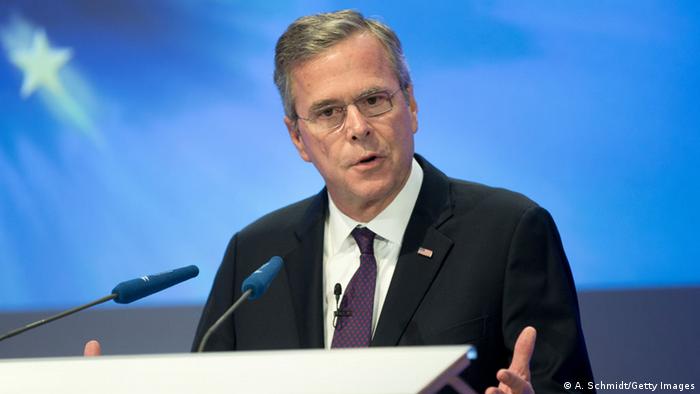 Speaking to reporters about security issues, Bush said, "I do know that we need to expand our presence here ... we ought to have a more significant presence in this region."

On Wednesday, in Germany, Bush, in a speech to a prominent European economic conference, said that NATO and US forces should match the strength that Russian President Vladimir Putin is amassing in the region.

The speech came at the end of the two-day German leg of a European trip aimed at burnishing the former Florida governor's foreign policy credentials.

Bush also called Putin "a bully" who can only be contained by a show of robust force. "I'm not talking about being bellicose, but saying, here are the consequences of your actions," he said.

In a speech on Tuesday, Bush said that President Barack Obama had rightly sent US forces to train along the border of Poland and the Baltic nations, which border Russia.

The deployment, which is on a rotating basis, is a response to Russian-backed separatists who have taken over a large segment of Ukraine, a former Soviet republic.

On Friday Bush will visit Estonia and leaders of the other Baltic nations Lithuania and Latvia, who have asked the US to send more - and more permanent - US forces to the region.

Bush said NATO and the US military should consider matching Russian forces, performing exercises on the opposite side of the border.

He noted that the US needs "to be consistently clear" that NATO rules requiring the defense of fellow treaty nations be strictly upheld. He credited Obama with reiterating that point at the recently Group of Seven conference in Germany.

Speaking with reporters and referencing Russia, Bush said, "They're deploying tens of thousands of people in the region, I mean, literally next door to our allies and our response is far less meaningful."

When asked if he would support basing US troops permanently along the Russian border, Bush said, "I don't know," and added, "I'm here to listen and learn and get a better sense of all this. I don't come to offer five-point plans."

And though Britain has recently deployed a warship to the region, Bush stopped short of calling for a US naval presence in the area.

Bush was in Europe this week meeting with government and business leaders in Germany, Poland and Estonia. He stressed that his view was that the US role in the region has softened under Obama, and that a Bush administration would bring renewed involvement in European affairs.

He wraps up the trip in Estonia and will return to the US on Saturday. On Monday, according to aides, Bush plans to announce his presidential candidacy in Miami.

Jeb Bush has called for closer trade and security ties with Europe during a speech at a major economic conference in Berlin. Germany is his first stop on a European tour aimed at touting his foreign policy credentials. (10.06.2015)

For Jeb Bush in Europe it’s all in the family

A trip to Europe, a fixture for US presidential hopefuls wanting to show their foreign policy chops, can help boost or bust a campaign. The leading Republican Jeb Bush faces a particular tricky tightrope act this week. (08.06.2015)