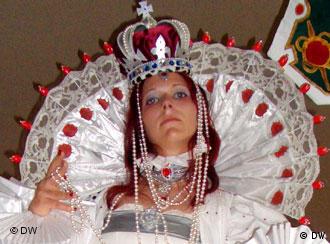 "I'm Queen Esther," said a young woman, whose might be compared to a futuristic disco-snow queen, if something like that existed. She's wearing a fairytale dress of silk with a hoop skirt, puffy shoulders and a corset -- everything covered with pearls and rhinestones. Her large collar is turned up, making looking to the left or right difficult, but works well with the crown. Fashion's not easy.

Her coat is faux Leopard skin, completing the look.

In reality, Queen Esther is Stefanie Wittman, and has a somewhat less elegant real-world vocation --- she's an employee at a car manufacturer. But to fulfil her queenly duties, she recently drove over five hours to the city of Bonn to participate in a fan fair for the Japanese Manga series called "Animagic."

Manga is a Japanese word for comics and print cartoons. To non-Japanese, it refers specifically to comics originally published in Japan.

Cosplay: The new way of dressing up 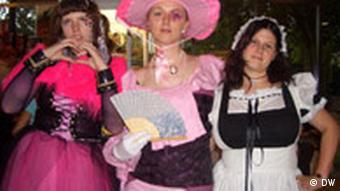 There are few limits when it comes to cosplay

Queen Esther is a character from the Japanese television show "Trinity Blood." The costume play, that Stefanie and many more revel in, is called "cosplay." Dressing up as a cartoon character started in Japan in the early 80s, when young people masqueraded as their favorite Manga characters to pose in Tokyo's entertainment districts.

Now the trend has caught on in Europe. But it's not just limited to Manga characters. Anything from Japanese bands, to Disney figures, to Hollywood movie characters such as "The Pirates of the Carribean" is allowed. 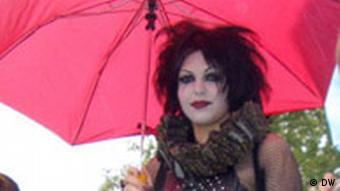 A visual kei fan, dressed up as her favorite band member

According to Jens Nave, who works for the Manga magazine "Animania," cosplay has its biggest following in Germany, followed by France. About 13,000 fans from Germany and neighboring countries participated in the "Animagic 2007" gathering, most of them in full regalia.

A good portion of the "cosplayers" are women between 15 and 25 years of age. Cat ears made out of plush are the simplest accessories. Most costumes are sexy and a little trashy. Plastic hair in pink or purple, sometimes falling down to one's ankles, is a favorite. Short tops, mini skirts and high-heeled boots are popular as well.

It is an expensive and time-consuming hobby. The costumes are usually hand-made, but worn rarely, such as at events like this one at local meetings of fan clubs. 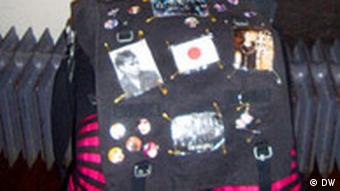 An identifying feature of the visual kei followers: a black bag with pictures and buttons

Another form of cosplay is the co called "visual kei." Instead of dressing up as anime-characters, youngsters dress up as their favorite bands. Fans of this are usually recognizable by a black bag they carry that's accessorized with safety pins, buttons and pictures of Japanese band members on it. Their hair is usually dyed black with neon-colored highlights. The look often has an androgynous aesthetic.

Inspired by glam-rockers such as David Bowie and Kiss, youngsters consciously try to blur the lines between male and the female.

Outsiders assume that followers of the visual kei movement are also fans of the German band Tokio Hotel. 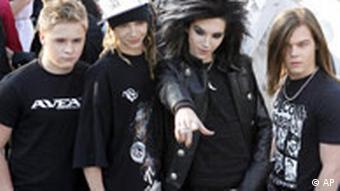 "I hate it when people connect visual kei to Tokio Hotel, those two have nothing in common!" said Antje Eggers. The music Antje really likes is quite harder and takes longer to get into than the German band. And, the fact that it's sung in Japanese plays a role as well.

According to Nave, visual kei as a subculture that is slowly becoming mainstream. The first visual kei concert in Germany of a band named "Dir en grey" sold out in Berlin quickly although there was little advertising about it. Fans communicate through Internet forums and exchange information about events.

Nave is sure that the fan base will continue to grow and says don't be surprised if you see life-size clones of Japanese cartoon characters on German streets before too long.

For the last decade Japanese manga comics have increasingly elbowed their way into the German teenage world. The creators of manga heroes are often as young as their readers -- and are, increasingly, young women. (08.11.2006)

The newest comic craze from Japan conquers Europe. While teenage girls are fascinated with their exotic new heroes, their parents are concerned about what they consider inappropriate content. (26.06.2002)