Japanese court refuses to halt restart of two nuclear reactors | Asia| An in-depth look at news from across the continent | DW | 22.04.2015

Local residents' effort to stop the restart of two Kyushu Electric Power Co. nuclear reactors has been dealt a blow. But campaigners insist the battle against atomic energy will continue. 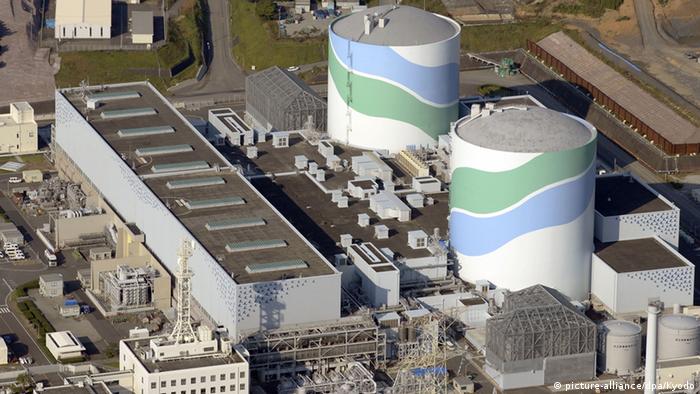 Aileen Mioko-Smith admits to being "bitterly disappointed" when the plaintiffs emerged from the Kagoshima District Court on Wednesday morning to inform their supporters that their request for an injunction to halt the restart of two reactors at Kyushu Electric Power Co.'s Sendai nuclear plant had been rejected - but the veteran anti-nuclear campaigner is adamant that the campaign against atomic energy will go on.

"It is unfortunate and was a bit of a surprise given the ruling on April 14 that banned Kansai Electric Power Co. from restarting two reactors at its Takahama plant," Mioko-Smith, an activist with Kyoto-based Green Action Japan, told DW.

"We were hoping that today's verdict would build on those earlier court rulings, but we feel that the court has made an error," she said. 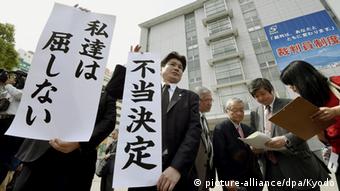 Many in Japan want the government to phase out nuclear power

Twelve residents living near the Sendai plant had filed the injunction request on the grounds that the operator did not have adequate measures in place to defend the facility against a major earthquake or a volcanic eruption.

The effectiveness of existing evacuation plans for local residents was another area of concern, Mioko-Smith said.

The presiding judge, Ikumasa Maeda, ruled that new safety standards for the plant exhibited "no irrationalities" and had been drawn up after consultations among the appropriate experts. He concluded that the operator of the plant had accurately predicted the biggest possible earthquake in the region and that the decision to go ahead with the restart was legitimate.

After the Fukushima nuclear accident in 2011, Japan has idled all of its nuclear reactors. A court in the Fukui prefecture has now prevented the restart of two of them, dealing a blow to Tokyo's pro-nuclear policy. (14.04.2015)

Four years after the Fukushima nuclear disaster, the government continues to insist that Japan needs atomic energy to power its industry and society. But many Japanese remain opposed to the restart of the idled reactors. (10.03.2015)

Mioko-Smith says Kyushu Electric used average earthquake intensities for its assessments and says the tragic lessons of Fukushima in March 2011 have not been learned.

"The science of earthquakes is not well understood and it is certainly not good enough to predict with any certainty the scale of a future earthquake in that region," she said.

Scientific experts for the local residents requesting the injunction made all those points, Mioko-Smith said, but "the court chose to ignore them."

The decision was swiftly welcomed by the Japanese government, which has been trying to win public and legal support for its policy of restarting the reactors as soon as they are approved safe by the industry's watchdog.

Yoshihide Suga, the chief cabinet secretary, told a press conference in Tokyo later in the day that the government would push ahead with its plans to have the Sendai plant back in operation before the end of June. At present, all of the nation's 48 rectors are closed due to public concern over their safety.

Yet energy sector analysts say that rising fuel bills for households and industry and ballooning emissions of carbon dioxide mean that Japan has little choice but to restart its reactors.

"The policy of the Japanese government has been quite clear for some time," said Dr. Kaoru Yamaguchi, a senior economist with the Tokyo-based Institute of Energy Economics, Japan. "They feel that it is in the interests of Japan to bring back nuclear energy and to utilize it until a viable alternative is available.

"They see it as a temporary measure, for maybe 20 or 30 years, until we have other options, such as renewables," Yamaguchi told DW. "And that seems to me to be a sensible approach.

"And while there are people who are opposed to the reactors restarting, there are other communities who want them operating again," he added. "The utilities pay a lot of money to local authorities that host these plants, while they also generate employment. 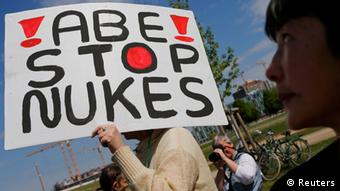 The Kagoshima court's decision is likely to be used by the government as a justification for pushing ahead on the Sendai plant and, once that is operating again, for other reactors around the country that have similarly passed the new safety standards to restart.

Yet Miyoko-Smith and people living near the Sendai plant are already planning their next legal move to confound the government's plan to approve the restart of the reactors.

"The plaintiffs are really disappointed by today's decision, but I've been speaking with our lawyers and we now plan to file similar injunctions in neighboring prefectures to stop this happening," she said.

"Models have shown that if there is an accident at the Sendai plant, the impact would be felt by tens of thousands of people in the surrounding areas," she said. "This case is not over yet, not by a long shot."