Japan evacuates as radioactive levels rise | Asia| An in-depth look at news from across the continent | DW | 15.03.2011

Low levels of radiation from an earthquake damaged nuclear power plant that exploded in Japan prompted some to flee the capital and others to stock up on essential supplies. 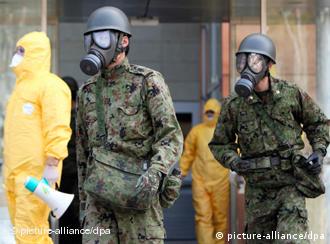 Japan faced potential catastrophe on Tuesday after a nuclear power plant damaged by the earthquake exploded and sent low levels of radiation floating towards Tokyo.

It is being described as one of the world's most serious nuclear disasters since the 1986 Chernobyl meltdown in Ukraine. Japanese Prime Minister Naoto Kan urged people within 30 kilometres of the facility north of Tokyo to remain indoors and conserve power. 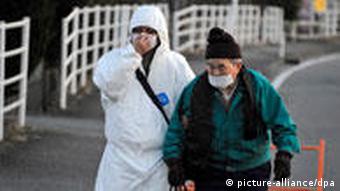 Ian Hore-Lacy from the UK-based World Nuclear Association said Japan is taking measures to protect its population from radioactivity in the aftermath of the earthquake and tsunami.

"Well they have evacuated the people, that’s the first thing. They have told people outside of the evacuation zone to stay indoors for the time being," he explained. "They have distributed iodine pills, so that if there is some sort of huge release of radioactivity people can take the iodine pills and that will help in respect to one particular contaminant."

The iodine pills contain potassium iodide, a common form of salt similar to table salt, that can protect the thyroid gland from radiation and cancer caused by radioactive iodine, by reducing the amount of dangerous contaminants the gland can absorb. 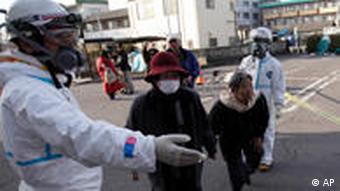 The Japanese government has also called for a 20-kilometre evacuation zone around the reactors. Officials in Tokyo, which is about 240 kilometres south of the plant, say only minute levels of radiation have been detected so far in the capital.

The situation is being closely monitored, while people are being evacuated to relief and rescue camps. Francis Markus is currently in Tokyo helping to coordinate relief efforts for the Japanese Red Cross. He told Deutsche Welle very large numbers of people have been moved to evacuations centers; "More than 400,000 people are being accommodated in schools and other government buildings. And the Japanese Red Cross Society is giving them medical care and also providing them with assistance."

He added that given the large numbers of people involved and the bottlenecks with transport and fuel, "the logistics of this are proving challenging at the moment."

The nuclear crisis has caused additional concerns for the country even though Japan's safeguards against disasters are considered to be some of the most advanced in the world, Markus also pointed out. "Japan is the most prepared country in terms of earthquake precautions and emergency drills and exercises. Yet this disaster struck and had a devastating impact on a large area in the north east of the country." Markus said it was the combination of earthquake and tsunami that has really taken Japan into a whole area of uncharted territory in terms of the kind of disaster that humanitarians are having to respond to." 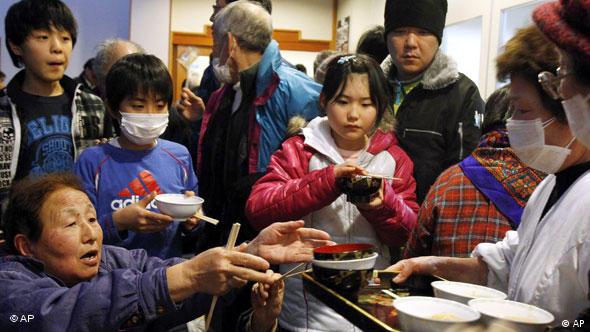 People taking shelter are provided with meals and medical care

Amid the possibility of further radioactive leakage, Prime Minister Naoto Kan addressed the nation and urged his people to act calmly and assured them that the government is making every effort to prevent the leak from spreading.

Radiation levels are rising at an alarming rate near Japan's Fukushima atomic energy complex. The government has asked residents to remain calm, as radioactive winds appeared to be blowing toward Tokyo. (15.03.2011)

Five days after the major earthquake and tsunami, rescue workers are continuing to search for survivors. The death toll is expected to exceed 10,000. In areas around the nuclear plants, people are urged to stay indoors. (15.03.2011)

The specter of Chernobyl looms over every failure of a nuclear reactor, but Mark Hibbs, senior associate for the Nuclear Policy Program at the Carnegie Endowment for International Peace, says such fears are exaggerated. (14.03.2011)