Increased radiation levels at Japan's Fukushima nuclear plant have led to a temporary evacuation of workers at the plant amid ongoing uncertainty over its stability. 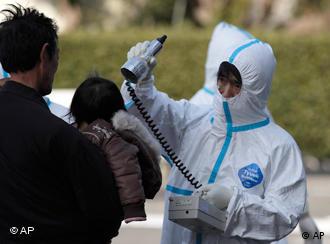 "Around 10:40 am (0140 GMT) we ordered the evacuation of workers... due to the rise in (radioactivity) data around the gate" of the plant, an official from the country’s nuclear safety agency told a televised press conference.

The order suggests the nuclear crisis has worsened with damage affecting four of the facility's reactors. As radiation levels fell later in the day, the staff reportedly were allowed back in.

A fire had earlier broken out at the Number 4 reactor, sending low levels of radiation wafting into Tokyo. Public broadcaster NHK has since reported that the blaze was now extinguished, but that smoke could still be seen rising from the plant.

Experts say used fuel rods in a cooling pool at the reactor could be exposed by the fire and spew more radiation into the atmosphere.

On Tuesday, radiation reached dangerous levels before returning to normal. Levels had risen around the Fukushima I complex after two explosions hit reactors earlier in the day, the third and fourth blasts since Saturday.

"There is no doubt that unlike in the past, the figures are the level at which human health can be affected," said chief government spokesman Yukio Edano. 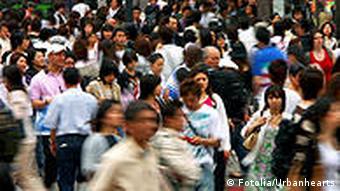 A single dose of 1,000 millisieverts - or one sievert - causes temporary radiation sickness, such as nausea and vomiting. A dose of five sieverts is enough to kill about half of those people exposed to it within a month.

The Japanese government has urged people living within a 30-km radius of the nuclear facility to stay indoors and a 30-km no fly-zone has been imposed around the reactors.

A spokesman for Tokyo Electric Power Company (TEPCO) said that radiation levels there had exceeded eight times the legal limit for exposure in one year.

In a televised address, Japanese Prime Minister Naoto Kan told the nation there had "been a fire at the Number 4 reactor" and that radiation levels in the surrounding area had "heightened significantly."

"We are making every effort to prevent the leak from spreading," he said. "I know that people are very worried but I would like to ask you to act calmly."

"They've got to get the fires out, keep the fires out and keep the water from boiling," said Murray Jennex, a professor at San Diego State University in California.

Experts suggested that radiation drifted 250 kilometers away from Fukushima to the capital, Tokyo on Tuesday. 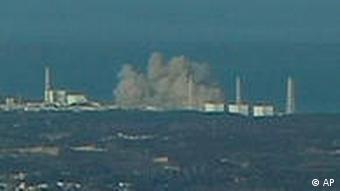 Authorities detected higher than normal radiation levels in the capital but said they posed no heath threat. Nevertheless, residents have been fleeing the city and shops are reporting panic buying.

Numerous countries have also imposed flight restrictions to Tokyo. Airlines from Asia and Europe announced on Tuesday that flights to Tokyo will be halted amid fears that radiation had reached the capital.

Lufthansa said planes will be diverted to the Japanese cities of Nagoya and Osaka, hundreds of kilometers west of the capital.

A spokesman for the airline said that the diversion could last until the weekend, adding that flights which returned from Tokyo on Monday had been checked for radioactivity and no traces were found.

Several countries, including Germany, have issued warnings against travel to the country. The German Foreign Ministry website states that "non-essential travel to Japan is inadvisable."

Japanese markets reacted to the increased concern on Tuesday with the Nikkei Index plunging some 13 percent. The steep decline in share prices over the last two days has wiped some $720 billion (517 billion euros) off the market. 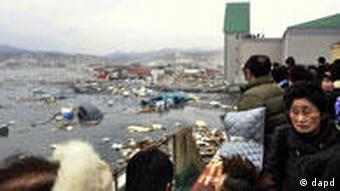 Millions are without running water and electricity

There have been a total of four explosions at the Fukushima nuclear power complex in northeastern Japan since it was damaged in Friday's massive earthquake and tsunami. The most recent were blasts at reactors Number 2 and 4 earlier on Tuesday.

Experts say Japan's current nuclear disaster is the world's worst since the 1986 Chernobyl meltdown in Ukraine.

Meanwhile, the full extent of the damage from the earthquake and the resulting tsunami that destroyed the northeastern Miyagi prefecture were still becoming clear. Officials say the death toll could reach over 10,000 people were killed and tens of thousands more were missing as a result of the quake, the world's fourth most powerful since 1900.

Even as Japan struggles to recover after an earthquake and ensuing tsunami devastated the country, it's clear the aftereffects will have environmental, business and political implications. (14.03.2011)

Two explosions occurred Tuesday at Japan's quake-stricken Fukushima I power plant. Japan has asked the International Atomic Energy Agency to help it deal with its nuclear problems. Iodine supplies are being readied. (14.03.2011)

Germany's Japanese community is anxious about relatives back home (15.03.2011)