Japan braces for exceptionally hot summer | Asia| An in-depth look at news from across the continent | DW | 12.07.2013

Widespread flooding in Canada and searing temperatures in the US: Weather patterns appear to be out of kilter. A similar development is taking place in Japan, with thousands being hospitalized due to scorching heat. 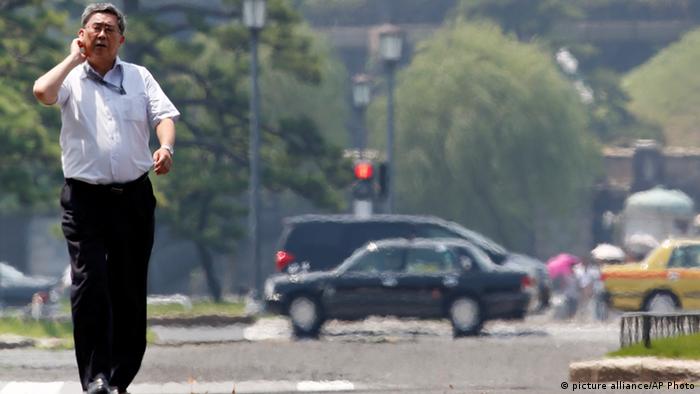 When Misako Ueno was a girl, she recalls, summers were certainly sunny and humid. But they never seemed to be simultaneously as scorching and steamy as they are today. "There always seemed to be a bit of a breeze coming off the ocean," says the sprightly 70-year-old resident of Yokohama, waving her hand in the direction of the mouth of Tokyo Bay where it narrows between the prefectures of Kanagawa and Chiba. "But now there are so many big buildings and factories in the way, maybe that is stopping the wind from coming up here."

More than 100 years ago, the Western traders who made the port city of Yokohama the hub of their enterprises in Japan chose to build homes on the top of the cliff that overlooks the city and is still known today as "The Bluff". The choicest spots enabled them to keep an eye on the ships entering the port from their living room windows, but also ensured a flow of cool air from the ocean in the sticky summer months, particularly at night. 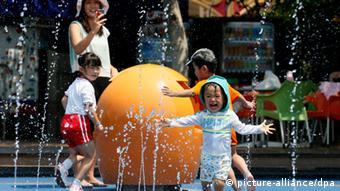 In the city of Koshu, temperature recently rose to more than 39 degrees Celsius

According to the Japan Meteorological Agency, the annual average temperature in Japan has increased 1.5 degrees in the last 100 years. And while that may not sound like a great deal - and may indeed be welcomed by sun-lovers - the increasing heat is having a strong impact on other parts of the country.

On Wednesday (10.07.2013), the Fire and Disaster Management Agency reported that around 2,600 people had been admitted to hospitals across Japan suffering from heatstroke in the first seven days of the month. The majority of the victims were elderly people and the total figure was nearly four times the 729 taken to hospital for treatment in the previous week. At least three people have died, according to the authorities.

On Tuesday, the temperature in the city of Koshu, in the central Japan prefecture of Yamanashi, climbed above 39 degrees Celsius, while temperatures rose above 30 degrees at two-thirds of the agency's 927 observation facilities around the country.

According to statistics for the month of June, the temperature in northern and eastern Japan was 0.9 of a degree warmer than the already rising average, and a marginally more tolerable 0.7 of a degree hotter in western parts of the country.

Four Japanese nuclear companies have formally applied for government approval to restart dozens of power plants. Almost all of the country’s nuclear plants were shut down following the Fukushima disaster two years ago. (08.07.2013)

After heavy rain and severe flooding, life in Canada's oil capital is beginning to return to normal. But in areas to the south and east, downriver the flood waters are threatening other communities. (22.06.2013)

The cold start into spring has made people in parts of Europe wonder if the climate is really warming. Global temperatures have not been rising in recent years. Is the earth cooling instead of warming? (18.04.2013)

Exacerbating the problem, the rainy season that normally afflicts the country for a month from mid-June ended a full two months earlier than usual this year.

The record high temperature for Japan was recorded in 2007, when thermometers in Saitama Prefecture hit 40.9 degrees, but experts believe that record will inevitably be surpassed sooner or later.

"Average temperatures over the long term are definitely rising in Japan," Jun Yoshimura, senior researcher at the Tsukuba Meteorological Research Institute, told DW. "One of the main reasons is global warming caused by emissions of carbon dioxide and other greenhouse gases, but another reason for a rise in temperatures at a local level is the heat-island effect in big cities," he said.

A heat island is triggered in major cities where large areas of concrete absorb heat and raise temperatures, an effect worsened by traffic pollution in the atmosphere and additional heat generated by industrial activity or air conditioning units in large buildings, Yoshimura said.

Big cities in Japan have recognized the problems they face and town planners in Tokyo are attempting to construct broader, tree-lined boulevards that run into the heart of the city's built-up areas from the waterfront districts. This, it is hoped, will bring cooler sea breezes into the city.

Other initiatives call for green spaces to be protected, for municipal vehicles - such as buses and rubbish collecting vehicles - to be replaced with vehicles that run on green fuel and ordinances that require drivers to turn off their engines while they are parked to be enforced more strictly.

Urbanization, in turn, creates localized weather patterns such as the new phenomenon of what is known in Japan as "guerilla rain" - brief but torrential downpours over relatively small areas.

Another frequent side-effect of elevated temperatures in Japan's cities are thunderstorms. On Monday, one man was killed and two other men and a woman injured when they were struck by lightning near the Arakawa River in Tokyo's Kita Ward. 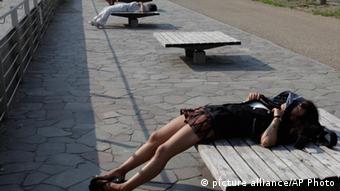 The government is warning that the early end of the rainy season means that the reservoirs that are required to water Tokyo and the surrounding Kanto region are not full and that shortages are possible later in the summer. Total water reserves in the eight dams along the Tone River are only 75 percent of the average level, officials said in a statement.

And if the summer of 2013 does turn out to be one of the hottest on record in Japan, that might in turn put additional stresses on the nation's power supplies.

All but two of the nations 50 nuclear reactors are still off-line as a consequence of the March 2011 disaster at the Fukushima Dai-Ichi nuclear reactor. Imports of fossil fuels have been increased to meet the shortfall in energy.

The government has issued a plea to households to try to avoid using domestic appliances at times other than the mid-afternoon peak for demand, companies are being urged to raise the minimum temperature on the office thermostat by a couple of degrees and legions of workers are being asked to practice "Cool Biz" - ditching their usual formal work attire of suit and tie for a more relaxed, and cooler, open shirt and jacket.