Japanese authorities say at least 30 people are feared dead in a suspected arson attack on an anime studio in Kyoto. A man reportedly started the blaze after pouring a suspicious liquid around the premises.

At least 30 people have reportedly died and 36 others have been injured in a fire that broke out at the three-story Kyoto Animation production studio early Thursday, Japanese authorities said.

Public broadcaster NHK reported that police had detained a 41-year-old man who allegedly spread a gasoline-like liquid around the property and said "You die" before setting it alight.

Prime Minister Shinzo Abe offered his condolences to the victims on Twitter, describing the incident as "too appalling for words."

Officials earlier confirmed 13 deaths and said at least 10 more people were found without vital signs on the upper floor of the building.

Fire department official Satoshi Fujiwara said 36 people were injured, some of them critically.

Read more: Berlin fires may have been caused by arson

The suspect, who was also injured and taken to hospital, is yet to be questioned by police, officials said. 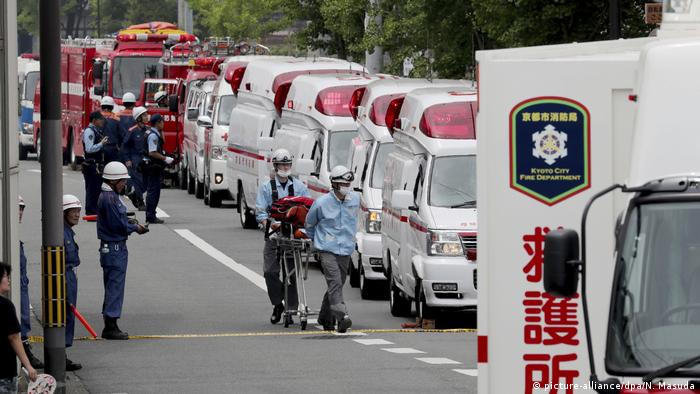 Around 70 people were believed to have been in the building when the blaze started. Footage on local television showed the studio's blackened exterior with white smoke billowing from the windows.

Violent crime is rare in Japan, but a number of high-profile attacks in the past few years have shocked the country.

Less than two months ago, a knife-wielding man attacked a group of schoolgirls at a bus stop in Kawasaki, south of Tokyo, killing one girl and the father of another, while wounding more than a dozen children.

In 2016, a man armed with a knife broke into a facility for the disabled in a small town near Tokyo and killed 19 patients.

Kyoto Animation, better known as KyoAni, was founded in 1981 and has produced successful anime series such as "Lucky Star," "The Melancholy of Haruhi Suzumiya" and "K-ON!" as well as the film "Free! Road to the World — The Dream," which is due for release this month. 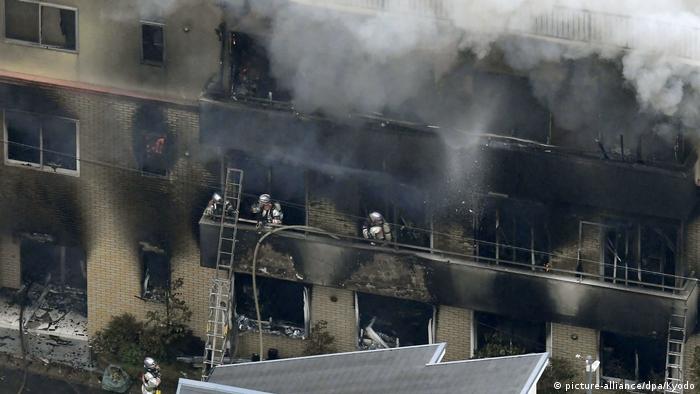 "I am heartbroken," Hideaki Hatta, the studio's chief executive told reporters. "It is unbearable that the people who helped carry Japan's animation industry were hurt and lost their lives in this way."

"It has a huge presence in animation here. To have this many people die at once will be a huge blow to the Japanese animation industry," he said.

"I love Kyoto Animation and the beautiful work they do. It's shocking that someone would attack the studio and kill so many talented men and women there. My heart goes out to all those affected by the assault. The entire anime community is in a state of shock," Jannick Behringer, a German anime fan currently vacationing in Kyoto, told DW.

Nina Osegueda, an anime fan from the US, told DW that it was hard to understand why anyone would specifically target Kyoto Animation.

Japanese social media users posted condolence messages, with some posting pictures of animations, to show their support to the fire victims. Many posted their messages with the hashtag "#PrayForKyoani" – using an abbreviation for Kyoto Animation.

The Paris prosecutor has said there's no evidence to suggest arson was behind the blaze at Notre Dame. Authorities have assembled a team to probe the cause and interview workers involved in the site's renovations. (16.04.2019)