Jan Frodeno: 'I need pressure to get the best out of me' 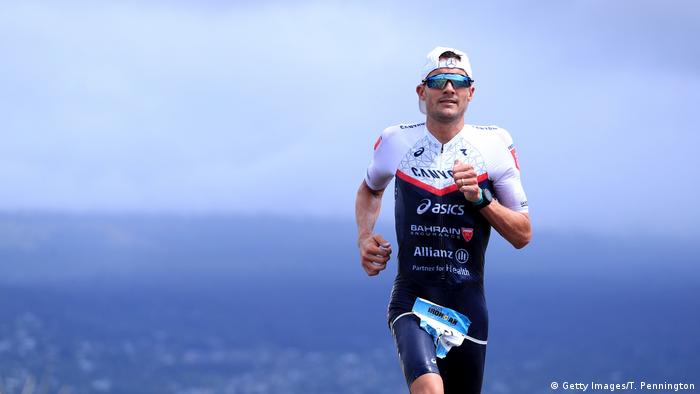 Deutsche Welle: Jan Frodeno, after winning the Ironman in Hawaii earlier this month, you spent a few days with your family in Australia. How is it for you to be able to relax without having to watch what you eat too much?

Jan Frodeno: I generally tend to restrict myself very little. That being said we are absolute health fanatics and always eat pretty well. And that's something we're trying to pass on to our kids as well.

When you won your third world championship in Kona, you did so with an almost perfect race. Was this success your most difficult, or perhaps your most beautiful?

The sweetest one is perhaps not a bad description. I've rarely raced with the realization that this is something I've worked for a very long time. And when you're striving for something unknown, you start to debate whether this perfect day exists. I am 38 now and I don't know how many more of these perfect days I'll have. It's always one thing getting to the mountain top but then you also realize that you can't stay there. It was unique to be able to enjoy it, especially the last third of the marathon, realizing that this might be the day.

Last year you missed the race due to injury. On the day of the race, you and your team signed an agreement to get you in the best possible condition for 2019.  You put a lot of pressure on yourself. Do you thrive on this pressure, or even need it?

I've always said that pressure creates diamonds and I need pressure to get to the very top, to get the very best out of me. I now realize that this kind of letter of intent also put pressure on my team as well. I remember the moment when we signed it and there was a little reluctance there. It wasn't just a piece of paper. I think that's something that really unites me and my coach. I first came to him in 2012 and said: 'Look you know I want to win Hawaii and I want to win it in 2015. Can you help me do this?'. There aren’t too many guys who turn up at his office with a big race ahead of them, asking whether he could help facilitate it.

Anyone who is so ambitious runs the risk of pushing themselves too hard. You experienced this sort of thing after your Olympic victory in 2008. How do you maintain your inner balance?

To be honest I've gone to the limit so many times and also got burned many times. Of course 2010 was probably the worst year in terms of being down mentally. But now I also wonder whether victory is that much sweeter after having faced adversity. And I believe you have to play with the limit in order to really find it. It's what currently motivates me; to find the limit and to see if I can do even better.

Winning is one thing, breaking records is another. In Hawaii, you did both. What drives you to keep to giving your all, even when you know you have the race won? Was it in this case the rivalry between yourself and Patrick Lange?

Of course there's a there's a big rivalry between Patrick and me. He won the previous two years and ran fantastic races. Unfortunately this year he decided to pull out of the race. So I only had the chance to redeem myself virtually because all that was left on the course was his record. I wanted to show that I'm the best version of myself but also the best there is.

Jan Frodeno: No end in sight

You've been doing this a long time. How do guard against getting bored or becoming complacent in training?

There is a Marcus Aurelius saying that I that I believe in very strongly: Memento mori – remember that you will die. And this came to me when I had a very close call with a truck trying to run me off the road and I realized that things could simply be over tomorrow. That's the truth of cycling and that's the truth of all of our lives. But it's very much the truth of being a professional athlete involved in cycling and really the positivity I get out of that is that I realize there are no second chances. There is no second chance to do today's session better tomorrow. I really try to get the most out of every day.

One of your main sponsors is Bahrain Endurance, a project closely linked to the country's royal family. Human rights organizations criticize athletes like yourself for being associated with a regime they describe as having a dismal human rights record.  You know about this, so why do you work with them?

I am often criticized for this connection but I feel that people are not looking at what we're actually trying to do there. It was actually through the Laureus foundation that I was made aware of the health problems in the area. I was approached by the team about implementing a grassroots program and trying to grow a triathlon program in the area. At first I really did look at these things and wonder if this was the right thing to do. After traveling there every single year we have managed to grow a community from 80 people in the first year to over 1,000 now. Five triathlon clubs offer continuous training. Sports are now a part of the mandatory school curriculum. We are going there despite the troubles and creating an escape for people or giving them the opportunity to make their lives better. To me personally, this feels a lot better than simply pointing the finger.

So you have set out to live your own values and differentiate yourself from the political processes there?

Absolutely. I don't share those values at all. I don't believe in military intervention. I don't believe in any of these kinds of things. I totally admit that I live in a bubble when I go there. But I feel that this bubble creates an opportunity for the people to be there. I mean for men and women to be running through the main streets of Manama wearing lycra and doing a sporting activity is definitely something revolutionary and something I think brings an escape from everyday life.

There is a German saying about it being best to go out on top. After the race in Hawaii, you said it was probably the perfect day that you had strived for your entire career. So why didn’t you call time on your career there and then?

If I’d stopped it would have been to please someone else because I would be stopping on top. This could mean the perfect ending to my career, but it wouldn’t be the perfect ending, to my personal sporting journey. And I've come to realize that now I have the luxury of doing what I want. I don't have to prove myself to anybody and I'm still hungry and I still am curious about whether it's possible to do it better. And as long as I have this curiosity I will keep going. And one day I'm pretty sure I'll wake up and I know that this curiosity is satisfied and that it's time to hang up my shoes. But that day has not come.

Jan Frodeno (38), is one of the world’s most successful triathletes. Earlier this month he won his third world Ironman title in Hawaii, breaking Patrick Lange’s course record. He won his first two titles in 2015 and 2016. In 2008 Frodeno won the gold medal at the Olympic Games in Beijing. That’s where he met his wife, Emma Snowsill, who won gold for Australia on the women’s side. The couple have two children and live in Noosa, Australia and Girona, Spain.

In Jan Frodeno and Anne Haug, coach Dan Lorang has two athletes capable of doing well at the Ironman World Championship in Hawaii. He spoke to DW about what sets them apart and why the race is so unpredictable. (10.10.2019)

Germany's Jan Frodeno has set a new world-best time for the Ironman triathlon. The reigning world champ bettered the previous mark by an astonishing margin of almost six minutes. (17.07.2016)