Ironman champion Patrick Lange: ′There is still a lot that I want to achieve′ | Sports| German football and major international sports news | DW | 29.12.2018

Ironman champion Patrick Lange: 'There is still a lot that I want to achieve'

Triathlete Patrick Lange won the 2018 and 2017 Ironman World Championships in Hawaii, breaking the course record both times. He spoke to DW about these achievements and why he employs a technical coach.

DW: Patrick Lange you successfully defended your Ironman World Championship title in Hawaii in October. How important was this to you?

Patrick Lange: I had to carry the burden of being the world champion throughout the season. Somehow as world champion you always have to win. I had to learn how to deal with this. I always said it was my goal to defend my title in Hawaii. Not only did I achieve that, but I also became the first person to do it in under eight hours.

You achieved this record time largely thanks to your strength as a runner. What is the secret that seems to make the marathon come so easy for you?

Running efficiently is a big part of it. I believe I am the first professional triathlete to work with a running-technique coach – for almost 10 years now. We observed the Africans. They have a running style that is completely quiet. A normal amateur runner, on the other hand, slaps his feet on the ground. This wastes energy. If you want to run fast you need to waste as little energy as possible. 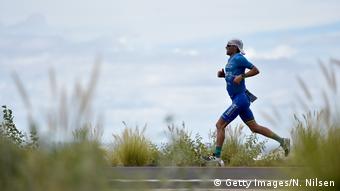 What do you remember about the almost eight hours of the ironman event in Hawaii?

When you have won a race and fulfilled your dream, you see everything in a very positive light. But of course it was an emotional roller-coaster ride for me. I wasn't at my best in the swimming portion, and I lost more time there than I had planned. Then I told myself that I had to mentally restart the race. That helped. On the bike I had one of my best performances ever, and in the running portion I was able to make up the six-minute gap between myself and the leader relatively quickly.

To top it all off, you also proposed to your girlfriend Julia. How important was this moment for you?

It was this thought that was a very strong motivating factor for me in several months of training. I drew a lot of energy from it. When this moment actually happens just as you had imagined it, it is very emotional and simply indescribable. I won't forget that for the rest of my life. My fiancée certainly won't either. It was actually the biggest thing for us on that day. 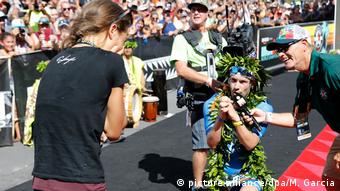 How difficult will it be to motivate yourself to deliver further top performances after this successful title defense?

Now that I have achieved my life's dream, I have to think about what to do next. Nico Rosberg retired after winning the Formula One drivers' championship because he felt he had achieved everything. But I don't think I will have that feeling for a long time. I respect it when someone retires after reaching the top, but there is still a lot that I want to achieve. I can still achieve a lot in triathlon, and I think that I can add one or two more successes to the race in Hawaii, which obviously suits me well. Maybe I'll eventually be counted among the truly great triathletes.

How much does the term "Hawaii hat trick" buzz occupy your thoughts?

I am often confronted by this, and I'd be lying if I said it wasn't a motivating factor.

Patrick Lange, 32, is a German triathlete and two-time winner of the Ironman World Championship in Hawaii (2017, 2018). He was the first competitor to complete the event in less than eight hours (7:52:39). He was named Germany's male athlete of 2018.

The interview was conducted by Florian Zschiedrich