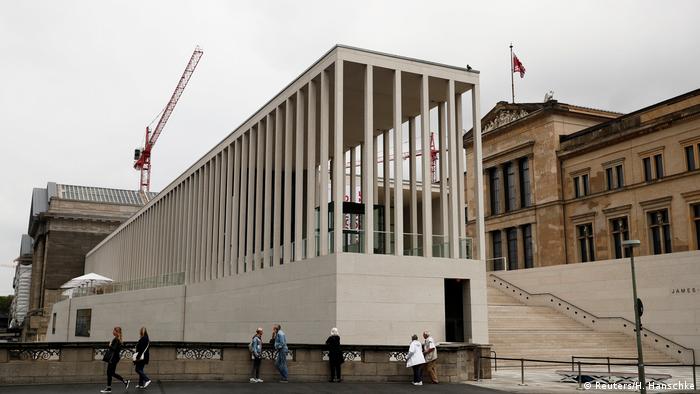 Since Ieoh Ming Pei's glass pyramid for the Louvre in Paris, no entrance building for a museum has attracted as much attention as the new James Simon Gallery in Berlin.

When the building flanking Berlin's central culture hub was officially opened on Friday in the presence of German Chancellor Angela Merkel, the vexed issue of creating a fitting gateway to the world-famous Museum Island finally had an impressive architectural fix.

The Berlin office of David Chipperfield Architects took their time to create the best solution: The James Simon Gallery is the product of a 20-year planning process and decade-long construction phase.

Serving as a visitor center, and in the future providing direct access to the Pergamon and the Neues Museum, the James Simon Gallery is situated on the fringe of Museum Island on the River Spree. From the gallery, an underground Archaeological Promenade will at some point lead to four of Museum Island's five museum buildings.

It was "exciting and difficult to understand what it was," legendary architect David Chipperfield told DW of his office's attempts to conceive the complex project. It wasn't simply another museum, but "a collection of different concerns and requirements the Museum Island needs," he said.

In the end, the gallery is "an orientation and an assembly place for larger visitor groups," he added, as well as a "connector" that directly links visitors to the island's museums.

The James Simon Gallery also contains a changing exhibition space, and an auditorium designed to present lectures and films. The building is also a bridge to the city, Chipperfield said.

A cafe with a large terrace is to stay open at night after the museum closes. In Berlin's historic center, which is rich in cultural buildings, the view from the terrace alone could make the gallery a new favorite among Berliners. 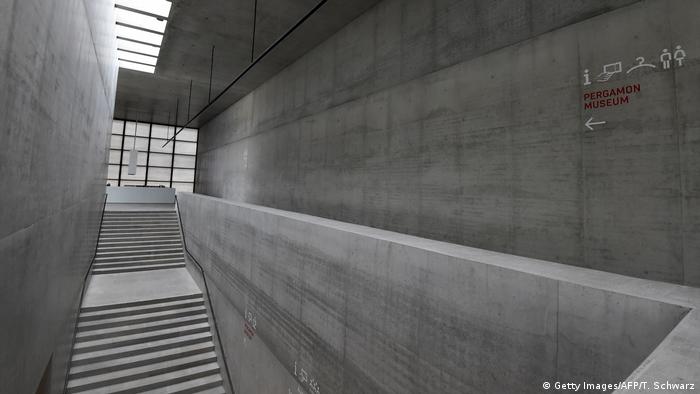 The passageway between the reconstructed Neues Museum and the Pergamon Museum

The new gateway to Museum Island, a UNESCO World Heritage Site, was built on the narrow strip of land where an entrance building by famed local architect Karl Friedrich Schinkel stood until 1938. The latter was typical of the classicist architectural language that still shapes the appearance of Museum Island, and which Chipperfield and his chief designer Alexander Schwarz have drawn upon, and inevitably updated.

At the opening ceremony of the gallery on Friday, Chancellor Merkel agreed that it well-complemented the existing historic buildings on Museum Island, which she described as a "universal museum of human history." She added that this gateway to five museums would facilitate access to exhibits from different cultures that prove "we are far more united than separated."

Chipperfield is not an advocate of the "form follows function" school, and it shows in the approach to the two-decade project.

"The purpose of the building is presumably to complete Museum Island as a public space," said Alexander Schwarz, director of the David Chipperfield Berlin office. "Developing architecture from this — not directly from function, but from the place, from the sanctuary for art and science, was certainly a process that was not easy," he added, referring to the long consultation process with the museum representatives, and the need to preserve historical monuments — also central to Chipperfield's transformation of the ruins of the Neues Museum into an elegant, modern museum. 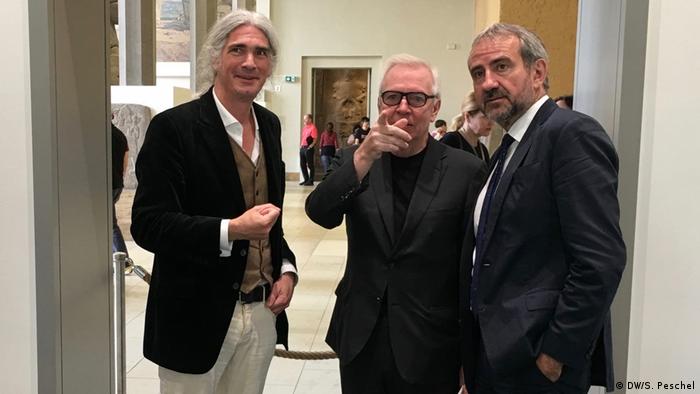 The gallery is named after Jewish philanthropist and patron James Simon, without whose foundations the Berlin museums would not be what they are.

The iconic Nefertiti bust and the Babylonian Ishtar Gate are just two of the treasures the passionate art collector donated to the Berlin collections in the early 1900s. Ten thousand objects were donated by the man born in 1851 into a wealthy textile dynasty, and are housed in ten museums.

Having died in 1932, Simon's memory was soon expunged by the Nazis. Nearly 90 years later, his significant contribution to Berlin's cultural heritage is finally being honored. 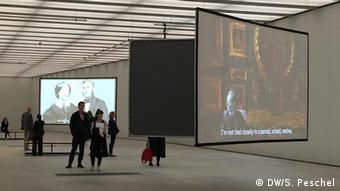 "The fact that the James Simon Gallery is named after him is a tribute to him and the Jewish bourgeoisie in Berlin," said Michael Eissenhauer, director general of the National Museums in Berlin. Chancellor Merkel said that Simon's important contributions to culture and society had been "forgotten for too long."

The new building is a kind of business card for Museum Island that beckons visitors to "find their way to the various museums," said Hermann Parzinger. The opening is "an historic moment because it will be the only building added to the historic ensemble of Museum Island" that is not yet completed, he added.

Parzinger said the gallery was ultimately a "modern keystone" that gives closure to the island's turbulent 180 year history.

As of 2019, visitors to Berlin's Museum Island complex will gain access to its different museums via a new building, the James Simon Gallery designed by star architect David Chipperfield. (13.12.2018)

David Chipperfield has shaped the face of the new Berlin. He told DW how he sees the city - and why architecture shouldn't be such a competitive sport. (01.10.2015)