As of 2019, visitors to Berlin's Museum Island complex will gain access to its different museums via a new building, the James Simon Gallery designed by star architect David Chipperfield.

Museum Island is a unique UNESCO World Heritage ensemble of museums that draw more than two million visitors from all over the world every year.

The new James Simon Gallery, named after one of the most important patrons in the history of Berlin's state museums, German-Jewish entrepreneur, art collector and philanthropist Henri James Simon (1851-1932), was designed by English architect David Chipperfield.

It will serve as the new entrance and visitors' service area for the five museums on Berlin's Museum Island, which includes the Pergamon Museum, home to treasures such as the Pergamon Altar and Babylon's Ishtar Gate, and the Neues Museum, which houses a famous bust of Egyptian Queen Nefertiti. 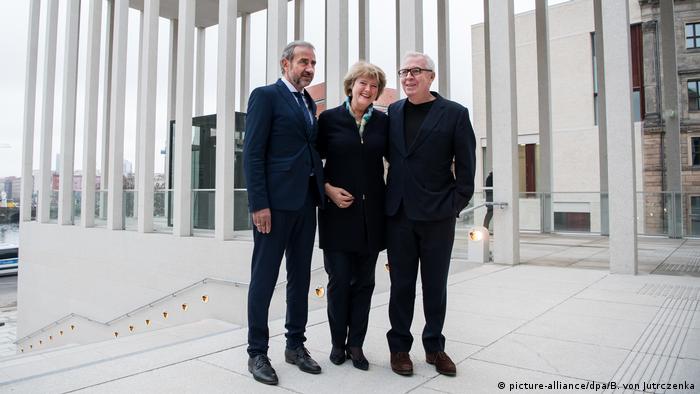 President of the Prussian Cultural Heritage Foundation Hermann Parzinger, Minister for Culture and Architect David Chipperfield at the presentation of the building

On Thursday, the keys to the new James Simon Gallery were handed over to Berlin's museum authority. Monika Grütters, Germany's minister for Culture and Media, praised the building as an "architecturally convincing entrance." The key to the new building in hand, Michael Eissenhauer, director of Berlin's National Museums even called it a "heaven-sent gift." On the other hand, the Berlin gallery has also been jokingly dubbed "the most expensive cloakroom in the world," as costs for its construction have almost doubled and it took five years longer than expected to complete the building.

The gallery, set to open in the summer of 2019, will house a ticket area, a cafe, cloakrooms and museum shop.

Click on the above picture gallery to find out more about the James Simon Gallery.

From November 17, important original works from ancient Pergamon and a 360-degree panorama will be shown in a temporary building. The restored Telephos frieze of the Pergamon Altar can also be seen again in Berlin. (16.11.2018)

With its five exhibition halls, the Berlin Museum Island is one of the most important museum complexes in the world. A sixth building will open in mid 2019 - the James Simon Gallery, a new reception center. (13.12.2018)

Pergamon - images of an ancient city

The exhibition "Pergamon Museum. The Panorama" in Berlin takes you on a 360- degree panoramic journey through time with masterpieces of the ancient metropolis and installations. (15.11.2018)