The suspects charged with killing journalist Jamal Khashoggi have appeared in court. His murder in the Saudi Consulate in Istanbul threw the kingdom into turmoil, with many suspecting high-level involvement. 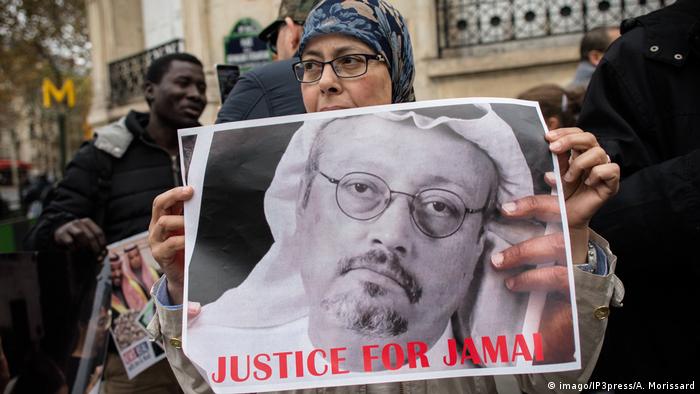 The trial of murdered dissident journalist Jamal Khashoggi opened Thursday in Riyadh with the state prosecution announcing it would seek death sentences for five of the 11 suspects, state media reported.

They provided few other details and did not name the suspects. Saudi Arabia previously said it had arrested 18 people in relation to Khashoggi's murder.

Khashoggi, a columnist for The Washington Post who was an outspoken critic of Saudi Arabia's ruling family, was killed on October 2 at the Saudi Consulate in Istanbul.

His murder sparked international tensions, with Saudi Arabia initially denying that he had been killed and US intelligence officials, among others, accusing Saudi Crown Prince Mohammed bin Salman of direct involvement in the murder.

A question of evidence

The 11 suspects attended the hearing with their lawyers, a statement from the prosecutors said. The statement also said that prosecutors had asked Turkey to send the evidence it had collected while investigating Khashoggi's murder.

"No response has been received to date and the Public Prosecutor's Office is still waiting for an answer," the prosecutor's statement read.

Turkish authorities have previously said they passed on investigatory evidence to Saudi Arabia.

Turkish officials also sought to have the Saudi suspects extradited to Turkey to stand trial there, but Saudi Arabia repeatedly turned down the requests.

Khashoggi's body is believed to have been dismembered. His body has yet to be found.

A date for the second hearing has not yet been scheduled.

Saudi Arabia's top prosecutor has recommended the death penalty for five of the suspects charged in the murder case of dissident writer Jamal Khashoggi. However, he denied Crown Prince Mohammed bin Salman's involvement. (15.11.2018)

Turkey seeks arrest of Saudis for murder of Khashoggi

The chief prosecutor in Istanbul has issued arrest warrants for two Saudi officials, who were close to Crown Prince Mohammed bin Salman, for the murder of columnist Jamal Khashoggi. (05.12.2018)