Former Ivorian First Lady Simone Gbagbo tells DW who she thinks is behind events in her country, including the ouster of ex-President Laurent Gbagbo. She calls President Ouattara's run for a third term unconstitutional. 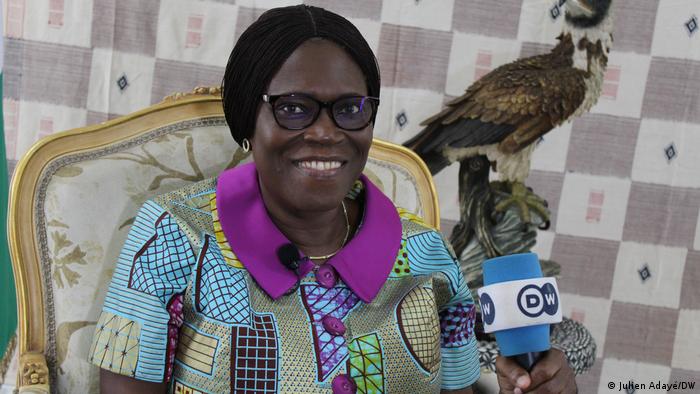 Simone Gbagbo, 71, second vice president of the Ivorian Popular Front (FPI), was considered the power behind the throne during her husband's presidency. After Laurent Gbagbo's refusal to concede defeat to Alassane Ouattara in the 2010 election, the couple was arrested. Simone Gbagbo was tried and sentenced to 20 years in prison for her role in the post-electoral violence that left 3,000 dead. She was later acquitted on charges of crimes against humanity and granted amnesty by Ouattara. Her husband, who is awaiting the end of the proceedings against him before the International Criminal Court (ICC), has filed his candidacy for the presidency.

DW: How do you feel about incumbent President Alassane Ouattara running for a third term?

Simone Gbagbo: The candidacy of Mr. Alassane Ouattara, his third candidacy, is absolutely inadmissible. It is unconstitutional. Be assured that Mr. Alassane Ouattara knows this. He said so himself, when he had the new Constitution adopted by the National Assembly in 2015. He said that he could not run for a third term, and he even said that he would not run for a third term. 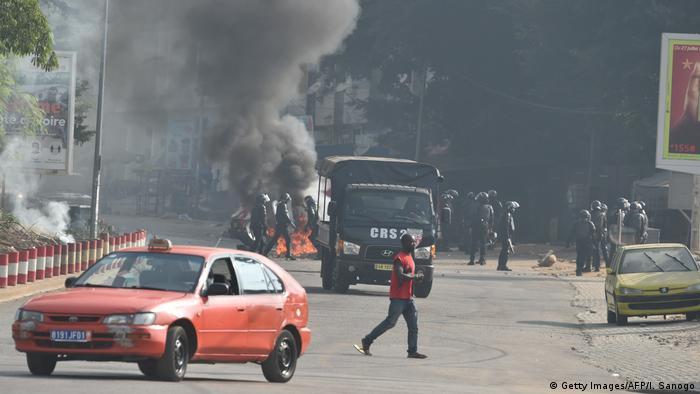 When this doesn't happen, Ivorians will protest, they will take to the streets as they have done and will continue to do. Because there is no way we are going to let our Constitution be trampled on. We cannot and will not go to the polls under the present conditions. That much is clear. There will be no elections in Ivory Coast under these conditions.

Earlier on you said there was a need for total opposition, and you called for civil disobedience. The governing party doesn't think that is necessary.

That's the tragedy of Ivory Coast. For years, we have wanted to sit down, to discuss the rules that govern elections in the country. They always refused to. It is the lack of dialogue in Ivory Coast that is at the root of the problems we are now experiencing.

Many people in Abidjan thought that you were going to run for president yourself in elections in in October. What happened?

The way I see it, I'd say that we must advance step by step and do what needs to be done. At the moment, what needs to be done does not include me as candidate! Neither is it important that anyone else from the FPI be a candidate. I think what is essential is that we get together we to organize truly inclusive elections. So that we may save democracy in our country. That is what is important.

To go to the polls and validate an illegitimate candidacy would only set back democracy in our country. Thus, firstly I am not a candidate also because I consider that the conditions even to talk about elections are not met.

Simone Gbagbo, what do you say to those who believe that you misled Laurent Gbagbo during his presidency?

Yes, well, you know, this is Africa. In Africa, as soon as something happens to the husband, the wife is considered guilty. Even when a husband dies, we say it's his wife who killed him. That's what I think this is on account of.

Your name has also often come up in connection with death squad cases or the disappearance of French-Canadian journalist Guy-André Kieffer. We've never heard you comment on that.

What I can tell you about death squads is that the first time ever I heard about death squads was from the French. I think that Ivory Coast was targeted by a French conspiracy. First it was [Jacques] Chirac's France, then Sarkozy's France, who decided that Laurent Gbagbo had no right to be in Ivory Coast. They organized things so that Gbagbo would be ousted from power. This they needed to show that he was surrounded by demons.

Apparently I became the leader of a death squad. But nobody has ever been able to provide any evidence to support this allegation. I just watched and chose not to say anything. At that time, 2002 to 2003, I took French press agencies who repeated the claim to court in Paris. I won all my lawsuits. They went appealed; I won again. I don't use weapons to act, to expose my ideas, to share my ideas. So I say nothing about the death squads. 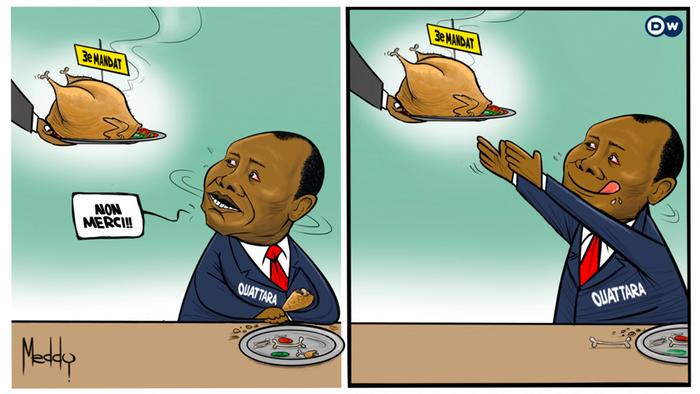 President Ouattara changes his mind about accepting the nomination for a 'tasty' third term, as seen by Meddy Mujane

Some Ivorians think that it is time for Ouattara, Henri Konan Bédié and Gbagbo to hand over power to another generation, by retiring from political life. They see this as the only way to ensure peace. What do you think?

Of course generations are there to succeed each other. If Ivorians no longer want someone at the head of their nation, young people should organize themselves at election time and call for succession. This must be done peacefully. It's in Africa that we ask these kinds of questions. This question is always asked in Africa. We get trapped by these kinds of questions. Everybody who thinks himself capable should be allowed to run, whatever generation he belongs to.

When Democrats in the United States look for a presidential candidate they pick the one who has the best chance of bringing them to victory, no matter how old he is. If he is younger, so much the better, provided that he is indeed experienced and wise, and that he has enough experience to be able to solve solve the problems. The important thing is to take all these decisions peacefully, with respect for each other, and not under a pressure which very often is organized from the outside.

Adapted from French by Cristina Krippahl