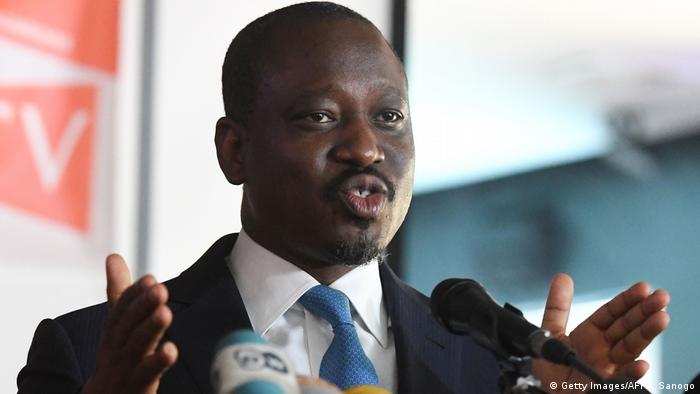 The arrest warrant against Soro, who retains the loyalty of several former rebel commanders who are now in senior military roles, could significantly raise tensions ahead of an October 2020 election that is seen as a test of Ivory Coast's stability, particularly after deadly unrest that followed the 2010 election.

Public prosecutor Richard Adou said that the arrest warrant had been issued for an "attempt against the state authority," benefiting from stolen public resources and money laundering.

He said intelligence services had evidence that "the project was to be implemented shortly," without elaborating.

Soro had been scheduled to return to his homeland from Paris for the first time since May, but aborted that plan and headed for nearby Ghana "for security reasons," according to Alain Lobognon, a spokesman and senior adviser for Soro's Generations and People in Solidarity (GPS) party.

Lobognon was later arrested along with 15 other Soro supporters.

Soro used to be an ally of President Alassane Ouattara, but relations have recently soured between the two, reportedly because of Soro's own presidential ambitions.

Political analysts say the 47-year-old political figure is held in high esteem among young Ivorians, but his nationwide popularity is less well documented.

A Christian from the north of the country, Soro led rebels who failed to topple former President Laurent Gbagbo in the country's 2002 civil war. Gbagbo was ousted following a second civil war in 2010-11 triggered by the president's refusal to concede to Ouattara following elections. Nearly 3,000 people were killed in the conflict.

Soro, who backed Ouattara, then served as prime minister and later speaker of the National Assembly until he stepped down in February this year.

In 2020, the region is set to get a long-discussed new currency: the Eco. Many Africans are pleased — but there is a lot of work ahead, say experts who insist a rebrand of the old Franc CFA will not do the job. (23.12.2019)

Ex-Ivory Coast President Laurent Gbagbo faces charges of crimes against humanity at the International Criminal Court in The Hague in connection with months of post-election violence that killed 3,000 five years ago. (27.01.2016)

Former rebel leader and Prime Minister Guillaume Soro was tried in absentia for "endangering state security." Observers say the conviction was related to his presidential ambitions.

Opposition leaders who boycotted Saturday's vote have claimed at least a dozen people died in election-related violence. President Alassane Ouattara is seeking a third term that his opponents say is unconstitutional.