Is Ivory Coast's president tightening his grip on power?

The second term of Ivory Coast's President Alassane Ouattara should be his last, according to the country's constitution. But Ouattara has dropped hints he might have other plans. Bram Posthumus reports from Abidjan. 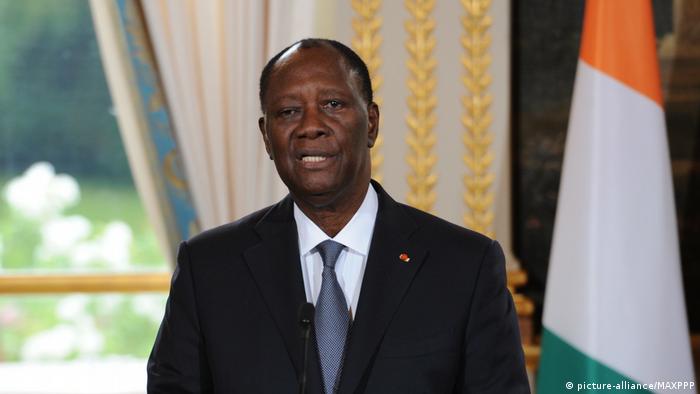 Ivory Coast's new government held its first cabinet meeting on Wednesday, after President Alassane Ouattara had dissolved the administration last week over a row between his ruling party Rally of the Republicans (RDR) and its coalition partner, the Democratic Party of Ivory Coast (PDCI).

The reshuffle was meant to appease PDCI which played a crucial role in helping Ouattara win the elections. However, key positions in ministries such as finance, defense and agriculture did not change.

It's Ouattara's latest attempt to consolidate power. Ouattara, who won the disputed 2010 run-off election and was reelected in 2015, is trying to set himself up for another term in office, even though Ivory Coast's constitution only allows two presidential terms.

In an interview last month, Ouattara said he was free to run again in the 2020 elections under a new constitution that was passed in 2016.

"The new constitution authorizes me to do two terms from 2020. I will only make a definitive decision then, based on the situation in Ivory Coast. Stability and peace come before all else, including my principles," he said in an interview with magazine Jeune Afrique.

Many fear tensions could flare up again in the West African country that has seen thousands killed over the disputed 2010 poll after then-president Laurent Gbagbo refused to step down after losing to Ouattara.

'False interpretation of the law'

"This new Constitution does not change the basic rule," said Andre Silver Konan, a writer and political analyst. "So any idea that you can somehow put the counter back to zero is a false interpretation of the law," he added.

Ouattara has claimed he only wants to safeguard Ivory Coast's new-found peace, stability and economic growth. However, Silver Konan disagrees with that statement and says Ouattara actually risks undoing his own legacy.

He points to the case of Senegal's former president Abdoulaye Wade who went after a third mandate in 2012 after changing the constitution to his favor — and then lost.

Two years later, Burkina Faso's President Blaise Compaore was outed by protests after he tried to amend the constitution to extend his rule.

Another case in point is the Gambia where autocrat Yahya Jammeh lost to his opponent in December 2016, but refused to acknowledge his defeat and decided to hold onto power.

In the end he was forced to flee into exile.

No lessons learned from the past?

Ivory Coast also remembers how former president Gbagbo didn't want to let go of power. He lost an internationally supervised election in 2011 and refused to recognize the result. This triggered the last and most violent phase of Ivory Coast's political crisis.

All four cases of leaders trying to bend the rules to their favor didn't end well for the incumbents — so is Ouattara really trying to cling to power?

"Ouattara is an intelligent man. In the macro-economic sense of the word he has run the country well," said Silver Konan. "His failure has been to divide the wealth that has come from this renewed growth. And problems with corruption persist. But there's no denying the progress that has been made," Silver Konan said.

"Now his time to depart has come and I'm sure he'll use his intelligence to recognize that," he added.

Editors and executives at independent and opposition media have been arrested for "spreading false information." Ivory Coast has been rocked by a series of strikes and mutinies by soldiers demanding back pay and bonuses. (13.02.2017)

A fragile calm in Ivory Coast