Editors and executives at independent and opposition media have been arrested for "spreading false information." Ivory Coast has been rocked by a series of strikes and mutinies by soldiers demanding back pay and bonuses. 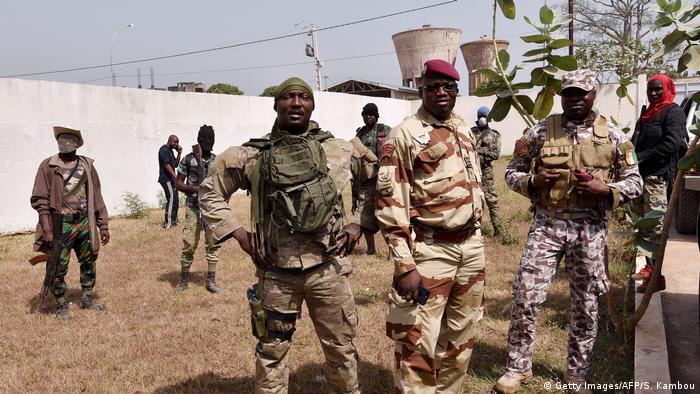 Six journalists have been detained in Ivory Coast for encouraging revolt and disseminating false stories, local media reported Monday. Six editors and three media publishers were brought in for questioning over their coverage of recent mutinies by security forces.

Calm has returned to cities in the Ivory Coast after a deal between the government and soldiers ended a two-day revolt. Soldiers launched the uprising to demand improved pay and working conditions. (08.01.2017)

Ivory Coast's president says his government has reached an agreement with mutinying soldiers to end a two-day revolt. The uprising over pay and living conditions had spread to cities across the West African country. (07.01.2017)

"Regarding recent action taken by the military ... we have come to believe that certain media organizations are spreading false information in a bid to encourage soldiers to revolt," public prosecutor Christophe Richard Adou said in a statement on Sunday, according to French news agency AFP.

Adou added that the journalists would be questioned to "find out where responsibility lies" for the alleged fake reporting. He did not elaborate on the content of the articles.

Those arrested included Yacouba Gbane of Cyclone Group, which publishes the opposition newspaper "Le Temps" - a daily that has regularly called into question the legitimacy of President Alassane Ouattara's administration and accused him of human rights abuses.

Another target was the newspaper "Notre Voie," which has often gotten into legal trouble for its inflammatory rhetoric against Ivorian politicians. It is associated with the center-left Ivorian Popular Front (FPI), which was founded by former President Gbabgo, currently on trial for crimes against humanity at the International Criminal Court.

Soldiers mutiny over back pay

The move against the journalists comes after weeks of troop insurrections across the country as soldiers demanded promised back pay and bonuses they say they've never received. At first, the protests included mostly former rebels who were made significant promises of compensation during a period of amnesty following the 2010-2011 Ivorian crisis.

Waves of other soldiers followed suit, most recently a group of elite forces, who fired into the air at the barracks near Adiake and seized control of the town. Each uprising has been followed by a flurry of talks between security forces and government officials as President Ouattara sought to end the unrest as swiftly as possible.