Calm seas and warmer weather paved the way for fresh tragedy in the Mediterranean on Monday. Italy's coast guard said that 108 migrants had been rescued and confirmed at least eight fatalities. 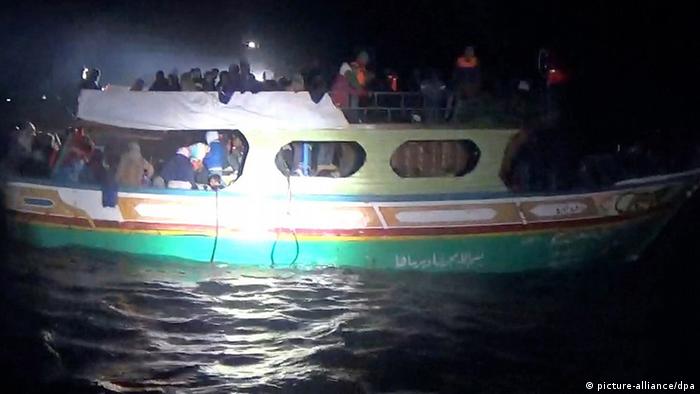 President Sergio Matarella said that the number of victims could be in the hundreds as many boats have been making their way to Europe from Libya over the past two days.

Speaking in Rome, Matarella called on Europe to reflect on its policies and attitudes towards the burden of southern EU countries in the refugee crisis in the face of "yet another tragedy in the Mediterranean in which, it seems, several hundred people have died."

Numbers have not yet been confirmed, but earlier on Monday, the Italian coast guard backed a statement from the private French humanitarian group SOS Mediterranee that the group had discovered six corpses in a rubber dinghy near the island of Lampedusa. The organization said at least two other unaccounted-for passengers were thought to be dead, while over 100 were rescued from the water.

In a separate incident, the coast guard saved 33 migrants near another small island off the coast of Sicily on Sunday.

Last week saw some 6,000 refugees sail from northern Africa to Italy in what appears to be the first wave of around 100,000 people hoping to reach Europe by boat, according to the International Organization for Migration.

Up to 1 million people could cross from Libya to Italy in the latest wave of migrants into Europe. Since the Balkan route was restricted in March, the hazardous Libya-Italy route may become the preferred entry channel. (13.04.2016)

Construction work has begun at the Brenner pass in the Alps as the country prepares for a new influx of migrants. With the Balkan route now closed, officials estimate 300,000 refugees will arrive in Italy by sea. (12.04.2016)