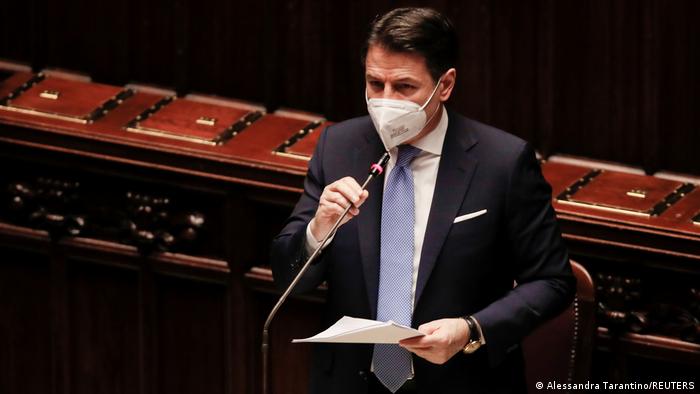 Italian Prime Minister Giuseppe Conte survived a confidence vote in the country's lower house on Monday, although his main test is expected on Tuesday when the upper house, the Senate, cast their ballot.

Conte's government won the lower-house vote by 321 to 259 — a margin that was wider than expected.

The premier had earlier appealed to liberal, pro-European lawmakers to support his beleaguered government or risk handing power to the nationalist right.

Conte's coalition has been on the brink since the country's former prime minister Matteo Renzi withdrew the support of his Italia Viva (Italy Alive) party last week, depriving Conte of his majority in the Senate

In an address to the lower chamber, Conte warned now was not the time for a new government. Conte said Italy deserved "a cohesive government," with "an essential European mission, pursuing a clear choice of field against nationalist tendencies."

"We risk losing touch with reality ... All our energies should be focused on the urgent crisis facing the country," he said, referring to the COVID-19 pandemic. The virus has devastated Italy's economy and left more than 82,000 dead, but Conte defended his government's record in dealing with the problems unleashed by the disease.

The ex-prime minister announced the resignation of two cabinet ministers and a junior minister following a spat with Conte over how to spend EU funds aimed at pulling Italy out of an economic slump induced by the coronavirus pandemic. The country is set to receive €209 billion ($250 billion) from the European Union.

The departure by Renzi's ministers was met with criticism but he claimed it was necessary to prevent Conte, who wanted to personally manage the EU recovery funds, from gaining too much power in the country.

Conte's center-left coalition government, which has been in power since September 2019, must now forge a new alliance for it to remain in power.

Out of service – Italy's unused hospital

Conte's real test will come on Tuesday when he addresses the Senate — a smaller chamber —  and faces what will effectively be another vote of confidence. He needs the approval of both chambers to pass the vote. If he fails, Conte's administration could be forced out of office.

Conte was tapped by Italy's 5-Star Movement to lead the government after the 2018 general election resulted in a coalition of the 5-Star Movement and Matteo Salvini's right-wing League party.In August 2019, the League submitted a motion of no confidence against Conte's coalition government. Conte had offered to step down as prime minister but the M5S and the PD agreed to form a new government with Conte staying on as leader.

Italy's southern Campania region has been swamped by the second wave of the coronavirus pandemic. Public hospitals in Naples can no longer accept all patients, as Delali Sakpa reports from Naples.

Germans unhappy with EU's handling of vaccine scheme 10m ago

Fly me round the Moon: Japanese billionaire offers 'out of this world' trip 52m ago