Italy's former interior minister Matteo Salvini has been accused of illegally detaining migrants at sea. A judge has now summoned Prime Minister Giuseppe Conte as a witness before deciding if Salvini should go on trial. 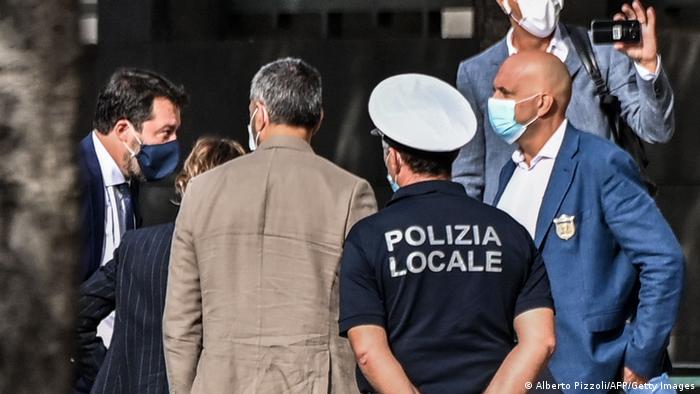 Several top members of the Italian government have been ordered on Saturday to provide information on far-right leader Matteo Salvini, who faces a possible trial for leaving 131 migrants stranded for several days on a coast guard ship in 2019.

Salvini appeared in court for a pre-trial hearing on Saturday, but the judge did not immediately decide if the accusations against him warrant a trial. Instead, the hearing was adjourned until November 20, when Italian Prime Minister Giuseppe Conte will appear as a witness. In addition, the court has summoned Foreign Minister Luigi Di Maio, who was vice premier at the time of the standoff. The court has also asked for the presence of the current interior minister, as well as the former defense and transport ministers.

Prosecutors in the Sicilian city of Catania allege Salvini abused his powers during his time as Italy's interior minister. Salvini, who heads the anti-immigrant League party, faces charges of kidnapping and dereliction of duties for delaying the disembarkation of the migrants as part of his "closed ports" policy.

Magistrates have put together a case arguing that Salvini effectively kidnapped the migrants, keeping them at sea in blazing summer weather until European allies buckled and agreed to resettle them.

In court will be a Nigerian family who are a civil party in the case and claim they were "treated worse than animals."

If Salvini is convicted for more than two years, he could also be prevented from holding public office for six years. Should that be the case, he would not be in a position to run for prime minister at the next election in 2023.

Preliminary hearing judge Nunzio Sarpietro will ultimately decide if the case is strong enough for the trial to proceed.

The Senate voted in February to lift Salvini's parliamentary immunity, paving the way for a possible trial in this case and in another, in which he is accused of refusing to allow 164 migrants to leave a separate rescue ship.

"I am calm and serene. I don't think I broke any law, but to have done what Italians asked of me," the ex-minister wrote on Twitter ahead of the hearing.

Salvini was also defiant as he arrived on Sicily on Thursday ahead of three days of rallies, dinners and debates organized around the court appearance. "I've picked out my best suit" for the hearing," he said.

A 500-strong police force were on standby to quell any potential unrest between Salvini supporters and left-wing protesters.

The shattered dreams of migrants