Far-right leader Matteo Salvini is set to face charges of illegally detaining migrants at sea after Italian lawmakers voted to strip him of immunity, reports showed. The League head could face up to 15 years in jail. 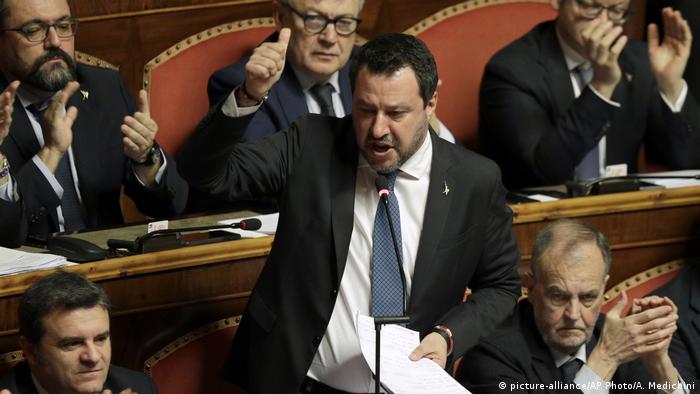 Italy's former interior minister, Matteo Salvini, was stripped of his parliamentary immunity on Wednesday, allowing  magistrates in Sicily to move forward with a case against him, local media reported.

Previously, a Sicilian court recommended that the far-right leader should face trial for ordering that more than 100 migrants remain on board a coastguard boat for several days in July 2019. He faces charges of abuse of power and illegal detention, and could face a prison term of up to 15 years if convicted.

The results of the Senate vote were reported by local media, despite the publication of formal results being expected later on Wednesday.

Salvini pledges to 'do it again'

After the vote, Salvini said that he had "full and total faith in the justice system."

"I have defended Italy," he told ANSA news agency. adding that he was proud of what he had done and would "do it again when I get back into power."

The 46-year-old Salvini is the leader of the populist League (Lega) party. The firebrand politician served as deputy prime minister and interior minister in the previous Italian government, but pulled out in a bid to force parliamentary elections. However, the League's coalition partner, 5-Star Movement, forged a new coalition with their Democratic Party (PD) rivals to stay in power.

He also faces a strong challenge from the grassroot "Sardine" movement which has been staging rallies across the country against his policies.