A massive right-wing protest in Rome saw the leader of the League party, Matteo Salvini, say he would "soon" return to power. Ex-PM Berlusconi slammed the current government as "the most leftist" in Italy's history. Some 50,000 people attended the anti-government rally in Rome on Saturday, according to a police estimate, with far-right leader Matteo Salvini taking center stage.

The rally was held under the slogan "Italian Pride." Organizers, including Salvini's League party and other right-wing groups in Italy, said around 200,000 attended the event.

"This is the Italy that works and suffers, that dreams and hopes," Salvini told the crowd.

The firebrand Salvini served as deputy prime minister and interior minister in the previous Italian government, but pulled out in a bid to force parliamentary elections. However, the League's coalition partner, 5-Star Movement, forged a new coalition with their Democratic Party (PD) rivals to stay in power.

Italy is due to hold nine regional votes by the end of next year, with the first scheduled this month in Umbria.

"We are going to win all nine and we will send them home, so those who know how to govern will return to government," Salvini said.

Revival of alliance with Berlusconi?

Representatives of several other right-wing parties also addressed the crowd, most notably media tycoon and long-ruling former prime minister Silvio Berlusconi. The 83-year-old leader of the Forza Italia party slammed the current government as "the most leftist in our history."

He also said that he had entered politics 25 years ago to save Italy from "communists" and that the threat today was even greater. 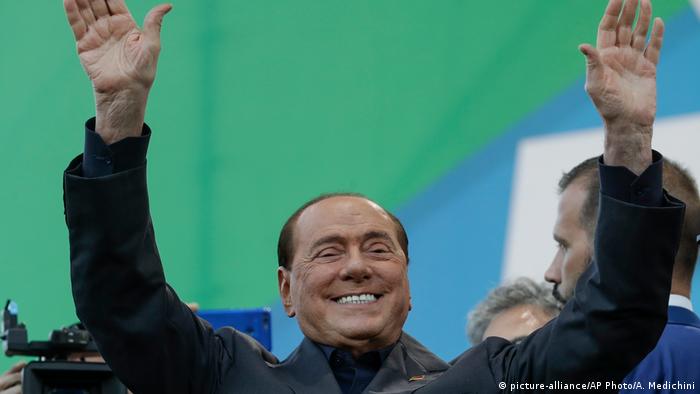 Berlusconi spoke ahead of Salvini at the Saturday rally

Salvini and Berlusconi have cooperated in the past, and despite the League's popularity, the former interior minister would likely need Berlusconi's support to regain power.

"Thank you Silvio for the battles you have fought and the battles we will fight," Salvini said at the rally.

Giorgia Meloni, of the far-right Brothers of Italy party, also spoke at the event. The representatives of CasaPound, a small neo-Fascist group, were present but its leaders were not given a chance to speak.

The rally opened with a commemoration of two police officers who were killed by a Dominican national in Trieste earlier this month. During a Tuesday debate on RAI public television, Salvini used language reminiscent of US President Donald Trump to describe migrants. The boats coming to Italy have brought "rapists, drug dealers, thieves, terrorists," he said.